Donald Trump Backs 'Punishment' for Women Who Get Abortions, Then Backtracks

Donald Trump said in a new interview Wednesday that he would support banning abortions, as well as “some form of punishment” for women who undergo the procedure illegally. But he later backed away from those comments amid criticism from rivals in both parties.

The initial exchange came as MSNBC’s Chris Matthews tried to pin Trump down on his views about abortion in an interview which aired Wednesday night. Matthews asked the Republican presidential frontrunner, “How do you ban abortion? How do you actually do it?”

After reiterating his stance of being “pro-life” multiple times, Trump said, “You know you’ll go back to a position like where they had where people perhaps will go to illegal places… But you have to ban it.”

Matthews pressed Trump on what should happen to women who get abortions under a future ban—the candidate has called for making a commitment to reversing the Supreme Court’s 1973 Roe v. Wade decision a litmus test for appointing justices. “There has to be some form of punishment,” Trump said, but that he has “not determined what the punishment would be.”

Matthews asked if the man who got the woman pregnant would be legally responsible: “I would say no,” Trump responded.

Shortly after a segment of the interview was published online Wednesday afternoon, Trump released a statement, saying the “issue is unclear and should be put back into the states for determination.” The candidate then released another statement walking back his comments on punishing women who have abortions.

“If Congress were to pass legislation making abortion illegal and the federal courts upheld this legislation, or any state were permitted to ban abortion under state and federal law, the doctor or any other person performing this illegal act upon a woman would be held legally responsible, not the woman,” Trump said in the second statement. “The woman is a victim in this case as is the life in her womb. My position has not changed—like Ronald Reagan, I am pro-life with exceptions.”

Republican candidates who oppose abortion rights usually advocate legal repercussions for doctors and medical providers who actually perform abortions but not for women. But Trump, who once described himself as “very pro-choice” and says he has since “evolved” on the issue, was clearly less comfortable under questioning.

Ohio Gov. John Kasich, when asked to react to Trump’s comments, said “of course women shouldn’t be punished” for having abortions: 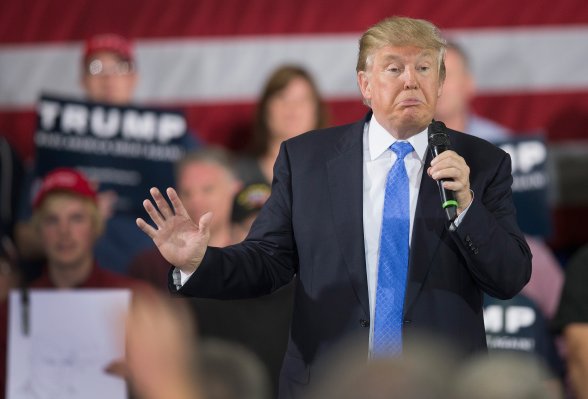