No team entered the NCAA men’s basketball tournament with a worse record than Holy Cross, a Jesuit liberal arts school with 2,855 students in Worcester, Mass. The Crusaders finished regular season 10-19; they needed to win four consecutive games, all on the road, to win the Patriot League men’s basketball tournament and clinch a spot in the Big Dance, where they didn’t last long. Holy Cross won a play-in game against Southern before Oregon crushed them in the first round, 91-52.

If the men’s hoops brackets mimicked academic performance, however, Holy Cross would be cutting down the nets. According to new academic rankings compiled by the Washington think tank New America and shared exclusively with TIME, the small college had the strongest academic ranking of all 68 teams in the men’s tournament.

If this year’s basketball brackets played out like academic matchups, with the school with the higher ranking advancing to the next round, the men’s Final Four would look like this: Villanova wins the South — which the Wildcats also did on the court, so kudos to ‘Nova for the all-around success — Holy Cross comes out of the West, Notre Dame wins the East and Butler takes the Midwest. Holy Cross knocks off Villanova in one national semifinal. Butler beats Notre Dame in the other semi, with Holy Cross taking the title game.

The academic champion on the women’s side tracks more closely with the action on the court. The University of Connecticut is the polar opposite of Holy Cross: the Huskies entered the tournament with the overall top seed and an undefeated record. In fact, the UConn women are so good, they’ve sparked a debate about whether their success is dulling the women’s game (as if it’s their fault no one can beat them?). The Huskies are riding a 72-game winning streak and trouncing opponents by ridiculous scores (i.e. their 98-38 Sweet 16 win over Mississippi State). UConn is a safe bet to win its 4th straight national championship.

And if the women’s hoops brackets mimicked academic performance, things would stay pretty much the same. According to New America’s rankings, Uconn is first among the 64 teams in the women’s tournament. The women’s academic Final Four would have played out like this: UConn took the Bridgeport regional, DePaul won Dallas, Buffalo was best in the Sioux Falls regional, and Stanford clinched Lexington. UConn beat DePaul in one Final Four game; Stanford beat Buffalo in the other. UConn may trample ts opponent in the national title game, on April 5. But in the academic championship, the Huskies just eked out Stanford.

What about the teams that made the actual Final Four? If the schools in this year’s semi-finals– which tip off from Houston on April 2 for the men, and from Indianapolis on April 3 for the women — played an academic game, Villanova (3rd overall in the New America rankings) would top Oklahoma (50th) in one men’s semi, while North Carolina (45th) trumps Syracuse (57th) in the other. Villanova takes it all. For the women, UConn (first overall in the New America rankings) beats Oregon State (58th), and Syracuse (14) gets by Washington (18). UConn topples Syracuse in the final.

The formula for New America’s March Madness follows that of its College Football Playoff rankings released in December (Northwestern took that title). The base score is a school’s most recent basketball “Graduation Success Rate,” a figure measured by the NCAA that doesn’t dock schools for having players who transfer or go pro before graduating–as long as those players leave in good academic standing. The higher the team’s graduation success rate, the higher they start out in New America’s rankings. (Both the Holy Cross men and UConn women have 100% graduation success rates). New America did subtract points from schools that graduate men’s and women’s basketball players at a much different rate than the overall men’s and women’s graduation rate at the school. To compare students to athletes, New America relied on federal graduation rates, since there’s no graduation success rate for the general student body. Even if a school graduated basketball players at higher rates than the overall male or female student population, the difference was counted as a penalty against schools that have low overall graduation rates.

One important note: Ivy League schools, and the military academies, do not report federal graduation rates for their sports programs. So in the men’s tournament, Yale was excluded, while Penn, Princeton, and Army were not counted in the women’s rankings.

Academically, the women’s teams fared much better than the men. The average New America scores for teams in the women’s field were 51% higher than the men’s teams. Twice as many women’s teams (22 vs. 11) suited up squads with a 100% graduation success rate. This difference is particularly stark at UConn. While the women finished first, the men’s team finished at the very bottom of New America’s rankings. According to federal data, UConn men’s basketball players graduate at a 6% rate, while the overall male student body has a 79% graduation rate.

The UConn men need to play more like the women, both on and off the floor. 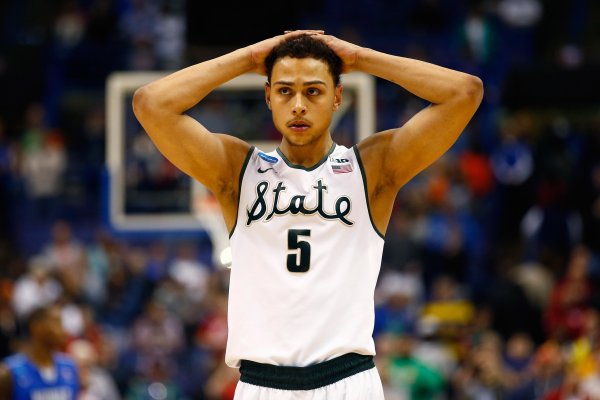 Michigan State Loss Means Your Bracket Is Busted
Next Up: Editor's Pick