The Ladies and the Trump

Donald Trump likes women. A lot. His former stake in the Miss Universe pageant, three wives and a daughter whose womanly attributes he praises a little too effusively are ample proof. The problem for him these days is that not enough women like him back.

In the past weeks he’s doubled down with comments about the looks of his model wife and threatened to “spill the beans” about rival Ted Cruz’s wife Heidi before retweeting a photo of her looking ugly and angry, for which Cruz called him a “sniveling coward.” He’s backed his campaign manager who was charged with the simple battery in Florida of a female reporter covering the campaign, saying the reporter isn’t a “baby” to be treated gently. And on Wednesday he told MSNBC that there should be some form of punishment for women who have illegal abortions, he just hasn’t figured out what yet—comments he backed away from amid a flurry of criticism from rivals in both parties. All of which has helped female voters flee Trump in droves.

To say Donald Trump is a man’s candidate, is an understatement. White men have turned out for Trump in record numbers this election cycle, propelling him to victories in 18 states. Take Michigan, which drew record GOP primary turnout, 50 percent above 2008 levels; 52 percent of those voters were men, 43 percent of whom went for Trump versus 23 percent for Ohio Gov. John Kasich, his closest rival in that state.

But winning Republican primaries facing a split field of establishment candidates is possible to do on the backs of male voters. Winning a general election, not so much.

A Republican presidential nominee has not won the women’s vote since George H. W. Bush in 1988. Since then, only George W. Bush has won the Oval Office for the GOP, and he did that in large part by limiting the loss of female voters to Democrats to the single digits thanks to his pushes with soccer and security moms. Women, who already outnumber men in the general population to 51 percent, are the single most powerful demographic in presidential elections, routinely voting 10 percent more than men. Without drawing a significant number of women, winning a general election just isn’t possible.

All of which spells trouble for Trump. In December he was already underwater with women in approval ratings by 43 percentage points, according to a Quinnipiac survey. And things have only gotten worse. A CNN poll released March 24 found that 73 percent of women disapprove of Trump and a Reuters poll a week earlier found that fully half of female voters have a “very unfavorable” view of the New York billionaire.

While Trump’s insults to veterans and John McCain, Latinos and African Americans seemed to have had little impact on his voting support, women seem to be Trump’s kryptonite.

His ongoing battle with Fox News anchor Megyn Kelly, whom he’s alluded to as a “bimbo,” hinted she was menstruating after a tough debate and in recent weeks tweeted that she’s “crazy,” hasn’t helped Trump with female voters. Nor have his comments about his daughter Ivanka’s figure (“If I weren’t happily married and, ya know, her father…”). And his comments about former GOP rival Carly Fiorina’s looks (“Look at that face!”) cost him one of his few low points of the debates.

Democrats, meanwhile, are rubbing their hands together in glee at the prospect of a Trump candidacy, hoping to paint him as extreme and out of touch with women as Todd Akin, the disastrous Missouri senatorial candidate whose comments in 2012 that women have a natural defense against rape were largely blamed for the GOP’s bruising loss that cycle. Groups like Emily’s List, NARAL and Planned Parenthood have all begun anti-Trump protests and/or ads, even though Trump is the one Republican candidate in the field who once supported abortion rights.

Things have gotten so bad so quickly that this week, House Republican women took the unusual step of publicly distancing themselves from Trump. “I think his comments regarding women and other comments, I find them inappropriate,” House Conference Chair Cathy McMorris Rodgers, the highest ranking GOP woman in Congress, told the New York Times. “I find them hurtful and I think they are hurtful to the party, a party that has been founded on equal opportunity for all.”

Can Trump recover with women? He makes the case that he has hired and promoted “thousands” of women in his businesses and his right hand man is his daughter, Ivanka, perhaps his most powerful potential surrogate with women. “Fewer comments about women’s appearance and more focus on the women he has helped and worked with in business would be helpful and I expect to see him deploy more female surrogates to make his case with women voters,” says Michele Swers, a political science professor at Georgetown who has authored two books on women in politics.

It’s either appeal to women or Trump would have to win 70 percent of white men, a larger turn out and margin of that demographic than even Ronald Reagan saw, in order to win the White House. “The gap has grown increasingly tenacious over time,” says Jennifer Lawless, director of American University’s Women & Politics Institute, “and Donald Trump’s sexist commentary, coupled with the Republican policy positions he espouses to hold, make it virtually impossible to envision any scenario whereby 50 percent of female voters would cast their ballots for him.” 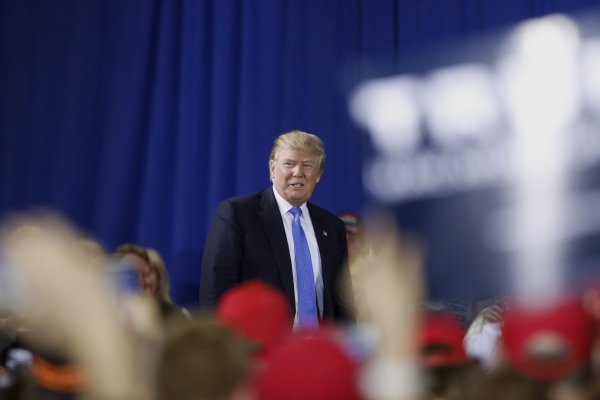 Donald Trump in Abortion Firestorm
Next Up: Editor's Pick