Last March, the Federal Reserve reported student debt across the U.S. at about $1.2 trillion. Meanwhile, more than two-thirds of new alumni have debt, at an average of $35,000 per graduate. Such problems are hot issues in the current presidential race, with Sen. Bernie Sanders proposing perhaps the most sweeping solution: free tuition at all U.S. public colleges.

For some today, that plan might seem radical, but free tuition isn’t unheard of. Some schools offer tradeoffs like work programs, for example, and military academies are free in exchange for service in the Armed Forces. Grants and scholarships sometimes knock the price down to $0, too.

Yet the idea of major state universities running tuition-free programs regardless of student or stipulation isn’t a completely foreign one. Though the exact quantity of U.S. public colleges that once offered it is unclear, history is dotted with anecdotes.

The University of Florida, for example, was free for in-state students for many decades. Though the exact timeline is hard to track because of differing language in the school catalogs — like a “registration and instructional fee” that emerged in 1959 — the word “tuition” for Florida residents didn’t pop up until 1969, University Archivist Peggy McBridge says. (Full disclosure: The author of this article teaches journalism at UF.) While it went through transitions in terms of fee costs and academic-merit-based full rides, the City University of New York system waived tuition up until 1976. Even within the last few decades, the state-lottery-funded HOPE scholarship has made in-state public colleges free for some Georgia students. Several other states also offer college and other education assistance through their lottery programs.

It is California, however, that has become likely the most cited example in the free-tuition debate. Its University of California system was created in 1868 with the decree that “admission and tuition shall be free to all residents of the state,” and the California State and community-college systems followed suit.

But a look at the history of college in California reveals that “free” is not necessarily a simple concept.

When free tuition in its three-tiered system for higher education — community colleges for two-year degrees, Cal State for four-year ones and UC for research — was affirmed by the state’s Master Plan for Higher Education in 1960, the plan did permit “fees.”

According to the Daily Californian, Berkeley’s student newspaper, the system instituted a $150 “educational fee” in 1970. For years following that decision, the state continued to use fee language that avoided calling money from students “tuition,” even as students were charged more money.

The decision to institute fees did not pass unnoticed. Shortly after being elected governor of California in 1966, Ronald Reagan proposed a tuition, a 10% cut from state funding and the firing of UC President Clark Kerr, who stood by students who were protesting rising costs. “We have to push Reagan right back to the wall,” Bettina Aptheker, a lead protester at the Berkeley campus, told the Christian Science Monitor in 1967. “If we have to, we will push him right through the wall.”

(“I wasn’t trying to do him any physical harm,” Aptheker, who is now a professor of feminist studies at University of California Santa Cruz, jokes today. “I was just trying to remove him from office.”)

Amid similar protests over freedom of speech, the Vietnam War and the draft, Reagan “demonized the students’ protests,” Aptheker says. In 1966, for example, at a speech in which he condemned protesters as “a small minority of beatniks, radicals and filthy speech advocates,” Reagan, then a candidate for governor, said he wouldn’t cut state education spending but “complained of the costs of welfare programs,” according to the New York Times’ archives.

Despite the protests, the state began to move down a path of gradually pulling money out of higher education, going from funding 32% of the UC budget in 1974 to 16% for the 2004-05 school year, according to the Daily Californian. Meanwhile, the state’s Proposition 13 was approved in 1978 on a wave of anti-tax sentiment, limiting property taxes.

It was soon clear that, despite the UC system’s foundations in the 19th century and the 1960 master plan, the landscape had changed: There was less money to go around in California and thus less willingness to fund all the government programs of yesteryear. No academic ivory tower could shield the UC system from the new political and economic reality, and by the 2012-13 school year, tuition had become the school’s biggest source of “core operating funds,” the Berkeley paper said.

Researchers agree that whether to waive college tuition — throughout the past century and today — comes down to a few basic questions, including: How many students are we talking about, and how are we going to pay for everything?

Read more: How Community Colleges Changed the Whole Idea of Education in America

A key point to keep in mind is that far fewer students were going to college 100 years ago, thus making costs a mere speck when compared to today, says John Thelin, a University of Kentucky education professor and author of A History of American Higher Education. In the 1909-10 school year, for example, 355,000 Americans — or 2.9% of 18- to 24-year-olds — were enrolled in higher education, according to the National Bureau of Economic Research. By 2012, those numbers climbed to 31.4 million and 41%. “So you’re dealing with a very different scale and scope,” Thelin says, describing earlier collegians as “very, very affluent students from very wealthy families.”

But as student populations have grown, they have become more diverse, points out Sandy Baum, an Urban Institute senior fellow and researcher of higher-education finance. Some taxpayers, she says, might see “low-income black and Hispanic students who can’t afford to go to college” as “the other” and are thus less willing to pay higher taxes to support free tuition for the growing melting pot of students.

“The reality is that when free college works — when the taxpayers are able and willing to pay for the full tuition for everyone — is when not too many people go to college,” she says.

One thing everyone seems to agree on is that a solution for student debt and college affordability is needed, but Sanders’ proposal for fixing cost and loan problems isn’t the only proposal. For example, Thelin believes there’s a better option in providing some loan forgiveness for those who serve society in the jobs they take on after graduation. But Aptheker still believes universal free tuition to be worth it — especially because the funding, she says, is already there.

“If you look at the actual statistics, you will see that the state of California has spent more on prisons and prison construction than it has spent on all education, K-12 and all the university systems in the state, for years,” she explains, noting that the Golden State, extoled for education during the tuition-free era, has slipped to near bottom in some rankings.

“There’s money,” she says. “It’s just a question of where you want to put it.”

Most Popular on TIME
1
The Next Global Depression Is Coming and Optimism Won’t Slow It Down
2
Individual Circadian Clocks Might Be the Next Frontier of Personalized Medicine
3
Air India Plane Splits in Two on Landing, Killing at Least 14 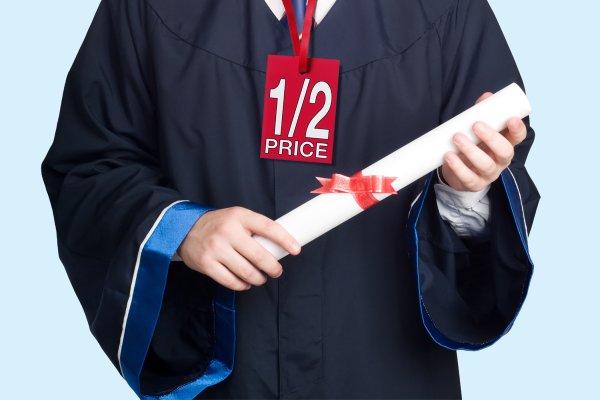