Two teenage girls were pepper-sprayed at a Donald Trump campaign rally that drew both supporters and protesters in Wisconsin on Tuesday afternoon, and one of the girls was sexually assaulted, police say.

A 15-year-old girl was pepper-sprayed by “a non-law enforcement person” in the crowd, and a 19-year-old girl nearby received some secondhand spray, according to a statement released by the Janesville Police Department. Police said that a man in the crowd “groped” the younger girl, and when she pushed him away, another person in the crowd sprayed her.

“Both individuals received medical attention at local hospitals,” the statement says. “We are currently looking for two suspects, one for the sexual assault and one for the pepper spray.”

Protests are a common occurrence at Trump rallies, and violence and tension between protesters and supporters has been escalating in recent weeks.

The police department released a photo of a man Wednesday afternoon, asking the public’s help identifying him “in reference to a possible assault” at Trump’s Janesville rally. In the photographs, the man is wearing a red Make America Great Again hat.

Of the 2,000 attendees at the rally, the Janesville Police said six protesters from the group Showing Up for Racial Injustice were arrested on charges of disorderly conduct, obstructing an officer and trespass, and 60 more protesters were asked to leave the hotel where the event was being held. 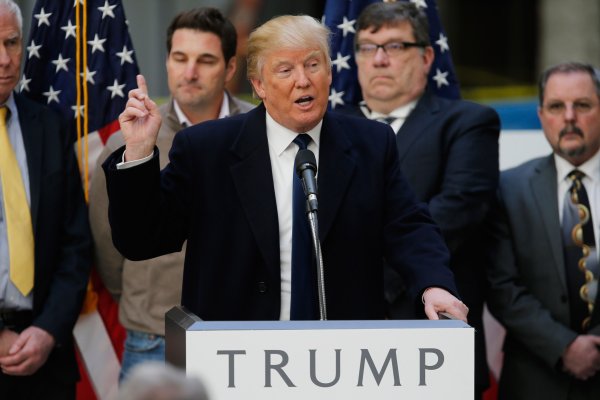 Trump Backs Down From Threatened Lawsuit Over Delegates
Next Up: Editor's Pick