The U.S. government’s announcement Monday that it hacked into the San Bernardino terrorist’s iPhone ended the FBI’s legal feud with Apple. But while many observers thought the incident left both the FBI and Apple looking foolish, there does appear to be a winner emerging from the case.

Shares of Suncorp, a Japanese technology company traded on the Tokyo stock exchange (ticker: 6736), soared 17% on Tuesday following the government’s court declaration that it “successfully accessed the data stored on [Syed] Farook’s iPhone.” In all, Suncorp’s shares have more than doubled in the six weeks since February 16, when Apple published its letter refusing to help the FBI.

Suncorp, which specializes in mobile data transfer as well as equipment for a popular Japanese pinball-like game called pachinko, owns Cellebrite, the Israel-based company that reportedly helped the FBI crack the iPhone.

Apple’s stock, meanwhile, was up just about 2% Tuesday afternoon, despite the fact that it is now free of legal expenses relating to the FBI case as well as thetechnological burden the government tried to impose.

Suncorp’s shares started rising last month, and really took off after the government said last Wednesday that an “outside party” had demonstrated “a possible method for unlocking” the iPhone. An Israeli newspaper quickly identified the unnamed company as Cellebrite, a government contractor that makes a mobile forensic devicefor extracting and decoding data from smartphones and tablets. Since then, Suncorp’s stock has risen nearly 40%, while Japan’s Nikkei 225 stock market index has been basically flat, and fell slightly on Tuesday.

The odd thing about the company’s dramatic stock rise is that neither the FBI nor Suncorp has confirmed the company was involved in unlocking the phone. In fact, the FBI has said very little so far about how it might have cracked the iPhone.

After the FBI accessed the San Bernardino shooter’s iPhone, Fortune asked Cellebrite to confirm its assistance with the process. An external spokesperson for the company said that Cellebrite was “unable to provide a comment on this topic,” but added that the company is typically unable to discuss active investigations and cases, unless a customer specifically asks it to comment publicly. While that’s true even for lower profile cases, the Apple vs. FBI feud is a “bit of a sticky wicket for everybody,” the spokesperson said.

Still, in the past week since the FBI said it thought it found a way to unlock the iPhone, the law enforcement agency struck multiple deals with Suncorp’s Cellebrite, Fortune has learned. On Monday, the FBI purchased $218,000 worth of IT supplies from Cellebrite—the same day the government said it had extracted the data from the phone.

The FBI also purchased more than $15,000 worth of IT software from Cellebrite on March 21, the day after the bureau said it received a demo from a third party with a promising method for accessing the phone, and that it would undertake further testing. (See a demo on YouTube explaining Cellebrite’s method for unlocking an iPhone that has been disabled for too many failed password attempts.)

Government purchase records show the FBI bought more than $233,000 in IT software and supplies from Cellebrite in the week since it said it found a way to unlock the terrorist’s iPhone.
General Services Administration

FBI categorized its purchases from Cellebrite as “radio and television broadcasting and wireless communications equipment manufacturing.” Cellebrite’s mobile forensics technology includes a standalone device that connects to smartphones as well as GPS units, along with software for detecting a suspect’s communication and movement patterns. Of course, it is possible that the FBI bought the equipment for another purpose, and investors may have heated up on Suncorp for the wrong reason.

Nonetheless, the FBI has not signed any other supplier deals in March, according to the records that are publicly available. Even if Cellebrite never confirms that it helped unlock the phone, all that matters for Suncorp’s shares is that investors believe it did. 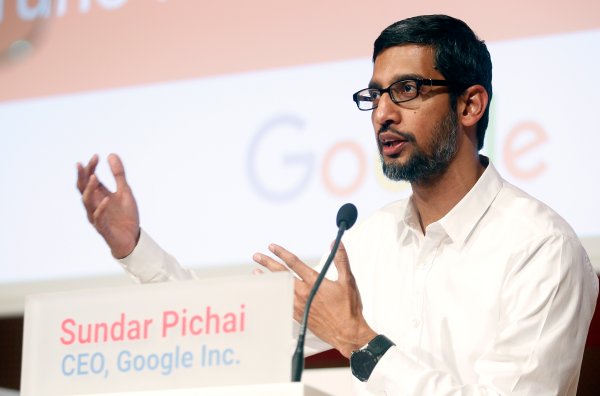 Google's CEO Made More Money Than You Last Year
Next Up: Editor's Pick