How the GIF Is Taking Over the World

From "Tapered Throne," a GIF-based project on black barbers in Oakland
Brandon Tauszik
By Olivier Laurent

The GIF has had a tumultuous history. The image format, which stands for Graphics Interchange Format, always struggled against the JPEG — it was unable to handle colors as well as its counterpart, despite being able to support animation. For almost 30 years, it lived on the fringe of photography, taken seriously only in the context of arguments over how to pronounce it. (The official answer: jif, like the peanut butter brand).

But the future now looks rosy for the GIF. In recent months, some of the largest and most influential technology companies have embraced the image format as a way to bridge the gap between still photography and video. For Apple, these animated images are called Live Photos, short stop-action movies recorded in the seconds before and after shooting a still image. At Instagram, it’s called a Boomerang: a short looping video that’s best used to capture subtle movements in static situations.

Companies like Instagram and Phhhoto have been trying to make it easier for non-professionals to produce GIFs and short animations. “Motion can add another layer or perspective to the story you want to tell,” says John Barnett, a product manager at Instagram who worked on Boomerang. The app, released last year, came after Instagram realized it had a thriving video community on its platform, where “people were already experimenting with motion in new and exciting ways,” Barnett tells TIME.

No matter their monikers, these animations expand the potential for storytelling. For Alex Chung, the co-founder of Giphy, a GIF depository valued at more than $300 million, the short looping videos offer deeper stories than still photographs. According to his math, given that a picture is worth a thousand words and a GIF is composed on average of sixty frames, than a GIF is worth sixty thousands words—“about the length of a novel,” he jokes.

One example Chung cites of the power of the GIF is the image of Hillary Clinton brushing her shoulder during her Benghazi hearing on Capitol Hill in October of 2015. The bored look, the contained sigh, the dismissive gesture—together, they’re enough to get a sense of how the 11-hour interrogation felt for the former Secretary of State and how she handled the situation. A still image from the same moment, meanwhile, would likely not have had such a clear meaning.

In photography, most practitioners have yet to embrace the format despite its advantages—but that may be changing. For example, Oakland-based photographer Brandon Tauszik used GIFs to document his town’s black barbers in a project called Tapered Throne. “The GIF contains the passage of time from film,” he says, “while also allowing for the decisive moment aspect of a still image—and all on infinite loop.”

“The art of the GIF is under-appreciated,” echoes Chung. “It’s like photography: taking a picture is easy, but taking a good one is hard. Every GIF has been hand-done and emerges out of a series of deliberate decisions.” Chung believes photographers will soon see the benefit of GIFs—especially if Giphy has anything to say about it. On March 14, the company announced the opening of a GIF production studio in Los Angeles under the creative helm of revered animator Nick Weidenfeld. The studio will employ up to 500 artists to provide high quality and high-end GIFs and support to the wider community.

And that’s just the beginning. Russell Armand, the co-founder of the animated image platform Phhhoto, sees a coming revolution in how images will be used and experienced in the near future. “The definition of a picture and the definition of photography is evolving in this truly digital space,” says Armand. “Pictures can do things that pictures were never supposed to do, and at some point soon, messaging will just happen inside the pictures themselves.” That interactive future for photography is not yet here, but GIFs are perhaps the harbingers of what’s the come.

“It’s not just about looking at a beautiful picture,” he says, “it’s actually going inside it and experiencing something that’s far deeper than what you can just see.” 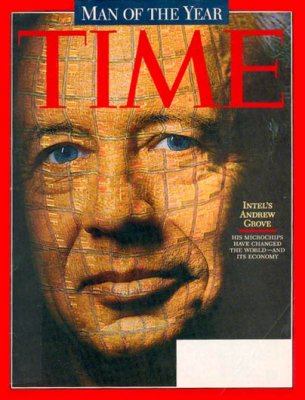 The Incredible Story of Andrew Grove, 1997 Man of the Year
Next Up: Editor's Pick