Why the Iraqi Operation to Retake Mosul Is Such a Mess

At an Iraqi military base a few miles from the frontline, Maj. Gen. Najim al-Jobori is calm and confident as he outlines what he says is the progress his forces are making to retake the country’s second-largest city from the Islamic State (ISIS).

On March 24, the Iraqi government announced the start of the long-awaited operation to take back Mosul. Both Iraqi soldiers with American-supplied vehicles and weapons, and U.S. advisors can now be seen on the Makhmour base, which was set up in January as a staging ground for the Mosul operation. Jobori — who is commanding the operation — says his forces have already completed the first stage. “Thanks be to God, the goals have been achieved by our forces,” he says.

The major general may sound confident, but interviews on the ground suggest little progress has actually been made — and instead battlefield incompetence, a lack of trust from the local population, and divisions among the various forces fighting ISIS are slowing the fight.

“What I see here are amateurs, not military operations,” says Maysar Hassan, a former Iraqi soldier whose village of Kharbardan was retaken by the army last week. “One small village, 1000 square meters, it took them three days to liberate it.”

The pace of operations has indeed been slow. In the five days since the government announced the offensive, Iraqi forces have seized fewer than 10 villages — and the jihadists had already abandoned many of them.

This may be due in part to a failure of tactics. Jobori has made it clear he is expecting ordinary Iraqis to help unroot the occupying militia. “We are hoping for an uprising [against ISIS] in the villages as we approach them,” he says.

But most Iraqis in those villages don’t trust the forces coming to liberate them. When ISIS moved into Mosul and the surrounding region in June 2014, thousands of Iraqi soldiers simply fled, leaving their American weapons and military vehicles to be looted by ISIS fighters. The forces are widely seen as incompetent at best, and oppressive and sectarian at worst.

Read more: This Fragile Iraqi Dam Could Pose a Bigger Threat Than ISIS

Progress has also been slowed by divisions between Iraqi forces and Iraqi Kurdish peshmerga fighters, who have largely proved more successful on the battlefield. Until the Iraqi army showed up here a few months ago, the peshmerga were holding this frontline after pushing ISIS out of Makhmour.

Now, the Iraqi army is now moving forward without them. “It’s necessary for the peshmerga to help the Iraqi army but we are waiting our leaders,” says Ahmed Anwar, a press officer at the peshmerga compound a few hundred feet away from Jobori’s base, who complains the U.S. gives the Iraqis better weapons.

He’s probably right. Chris Harmer, a senior analyst with the Washington-based Institute for the Study of War says the U.S. is continuing to prioritize the national Iraqi army that it has spent billion of dollars on, out of “either illusion or delusion or optimism that Iraq is still a unitary nation state,” he says. Putting the Kurdish peshmerga in charge, he says, would be an admission that Kurdistan is functionally independent.

But tensions between the Iraqi Kurds and the Iraqis are only likely to grow on an uneven battlefield. Makhmour is a disputed area, claimed by both the central government in Baghdad and also the Kurdistan Regional Government (KRG) based in Erbil. In June 2014, the area was mixed between ethnic Kurds and Sunni Arabs. Erbil has been clear about its intention to keep the area, making the Iraqi army base here a point of contention.

The Kurdish forces too are fomenting mistrust of the armed opposition to ISIS. Across from the base almost 2,000 people, mostly Sunni Arabs, displaced by the first stage of this Mosul operation are gathered in a youth center. Men are kept in a separate tent, guarded by peshmerga who allow them out in pairs to get food and use the bathroom.

“It’s important for security,” says one of the peshmerga guarding the shelter. “We took their cell phones away.” The Sunni Arab men are taken in groups for questioning by Kurdish intelligence officers, who fear they might be ISIS members or informants.

If Jobori’s “uprising” is to happen, however, it will need to have the support of the local Sunnis that the Kurdish forces are now keeping under close guard. Tribal leaders say they are eager to play a role in the fight against ISIS and help take back their own villages, but say they are being sidelined and not given enough weapons or support.

“The Sunni tribes need to be involved in this operation. Or at least you need to open the door for these young people and they will be very effective fighters against ISIS ,” says Hassan Sabawi, a member of the Nineveh provincial council, whose territory is under ISIS control.

Unless all these fractious forces can find a way to work together, it’s difficult to see the Iraqi army make significant progress towards retaking Mosul. “The [Iraqi army] is the least quality military organization in Iraq,” says Harmer. “They are going to need all the help they can get.”

— With reporting by Salar Salim 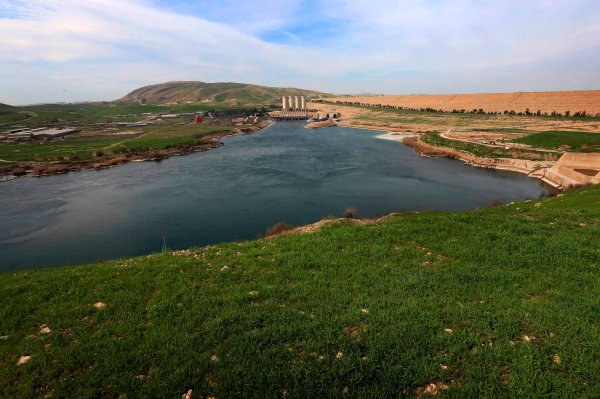 This Fragile Iraqi Dam Could Pose a Bigger Threat Than ISIS
Next Up: Editor's Pick