Let’s kick the elephant out of the room before it sits on something: Razer’s lithesome Blade Stealth isn’t a high-end gaming laptop, and that’s by design. Intentions matter here, and Razer’s marketing makes for essential reading. Parse carefully, because if you’re looking for a mobile machine that’ll run mainstream games at even moderate detail levels, you’re shopping in the wrong weight class entirely.

If, on the other hand, you’re looking for a reasonably priced boutique ultrabook with up to 4K retina-scorching visuals and gorgeous lines—and, crucially, a secondary option that nullifies any graphics-crunching concerns—keep reading.

You can have the Stealth in two screen configurations at two storage options a piece, underscoring Razer’s design asceticism. At the entry level, $999 gets you a QHD 2,560-by-1,440 pixel display (that’s 234 pixels per inch, on par with Apple’s Retina MacBook) and 128 GB solid state drive. Or at the high end, you can spend $1,599 for a 4K 3840-by-2160 pixel display (That’s 352 pixels per inch, which is kind of incredible for a multi-touch 12.5-inch screen.) QHD is arguably plenty of pixel-oomph for any ultrabook, so grabbing that plus the 256 GB solid state drive for $1,199 feels like the Stealth’s sweet spot.

The rest everyone gets standard: a 2.5 GHz Intel Core i7 that will turbo to a reasonably zippy 3.1 GHz, 8 GB of DDR3 memory (though not upgradeable), an Intel HD 520 graphics processor that’s at the higher end of the integrated lineup, Wi-Fi and Bluetooth, a Thunderbolt 3 port, two USB 3.0 ports, a 2.0 megapixel webcam, an HDMI port, stereo speakers, a combo 3.5mm headphone/microphone port, and an anti-ghosting backlit keyboard with individually color-configurable keys.

The Stealth out of Razer’s slender box is a study in metallic minimalism: the 12.5-inch matte black laptop in some protective plastic, its tiny tube-like 45 watt power adapter and a coaster-sized stack of reading material. That’s it. In your hands the closed, half-inch thick body could be a petrified notepad, as lithe and paradoxically unyielding as a MacBook Air.

That’s in part because like the Air, the Stealth is precision-cut from an aluminum block. That lends it a more durable and edge-flush unibody frame. Though unlike the Air, the Stealth’s lower piece doesn’t taper as acutely from back to front. I’m not sure if that benefits the system’s tensile strength, but it certainly doesn’t hurt the weight: a mere 2.75 pounds, or lighter than Apple’s 13-inch MacBook Air by nearly a quarter pound.

Rev it up by pressing the spun-metal power button located center top of the chiclet keyboard and you’ll have to walk through a few setup screens as Windows 10 initializes, downloads updates and gets you properly signed in. While that’s happening, you’ll notice the backlit full RGB keyboard cycling through its default rainbow hues. You can reconfigure the colors at will, and even map each key to a unique color, which lets you concoct any just-for-fun or functionally specific look you like. The keyboard itself has more than enough travel depth for a laptop this size, with a healthy amount of resistance. And the glass trackpad feels as even and precise as a glass trackpad should, with easy, fast and quiet clicks.

My first stop: Minecraft, because I’m an addict, and what else are you going to play on an Ultrabook? The Stealth handled the Windows 10 version dutifully, running at what looked to be 1280-by-720 pixels with admirable crispness given the requisite pixel-stretching on a 4K screen. I couldn’t get FRAPS or Bandicam to throw up a proper benchmark, but even with the view slider maxed, the game felt smooth and consistently in my target vicinity of 30 frames per second.

Try newer 3D games of any complexity, however, and they’re almost unplayable, even at lower resolutions and with detail settings minimized. This, as noted above, is to be expected with any integrated graphics setup. The Stealth’s default strengths are analogous to a MacBook Air’s, in other words: browsing, emailing, tweeting, some light 3D gaming and whatever else you want to do that doesn’t involve pushing massively complex 3D worlds around. The price of extreme portability plus competent battery life remains a certain measure of ingrained feebleness.

But the Stealth has an incredibly cool alter-ego that lets it transform into a full-fledged gaming powerhouse. It’s called a Razer Core, and for $499 (or $399, if you buy with the Stealth), it’ll let you harness the power of a tricked-out desktop graphics card, which connects by way of the Core to the Stealth’s Thunderbolt port. Note that $499 just covers the cost of the Core itself. You’ll still need to furnish the graphics card, so budget at least $300 to $400 more for something reasonably powerful.

The Core isn’t available yet, and having laid hands on one at GDC 2016 a few weeks ago, I confess I’m a little put off by its size and weight. It’s definitely portable, but it’s like schlepping around a brick-filled micro-tower. That said, if you fit the “game at home, work on the road” profile, the Stealth buddied with a Core looks like a modular gamer’s dream come true.

Sometimes the Stealth’s look can turn a bit shabby, because fingerprints love black aluminum as much as glossy plastic. I adore the idea of a laptop that looks like a slab of machined onyx, but that appreciation of the laptop as an objet d’art dwindles once I’ve tramped up the finish with smudges. Another important quibble is that battery life is significantly below average for an Ultrabook if you pick the 4K screen, and merely average if you opt for the QHD one.

Who says Razer should only make laptops for enthusiast gamers? Why not target the business ultrabook demographic companies like Apple (with its MacBook Air) or Dell (with its Dimension XPS 13) tend to dominate?

While I assume biz types who’ve poked around the ultrabook market looking for Apple-inspired PC alternatives might be tickled by the Stealth, what’ll lead them to Razer? What’ll convince their employers that this too-cool slab of black-aluminum with a triple-headed neon-green snake logo on the lid is foremost a productivity tool?

The price alone, perhaps, given the extras you’re getting over a comparable Apple or Dell system. It’ll be a shame if the Stealth winds up languishing somewhere between enthusiast curiosity and broader demographic ignorance, because this is the Ultrabook I’d pick if I had to pick one right now. 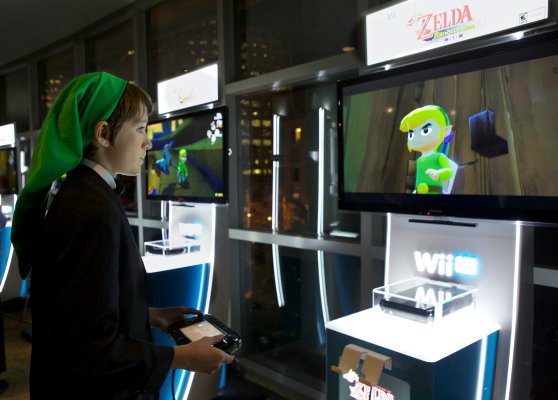 You Can Now Play Legend of Zelda on Your Computer
Next Up: Editor's Pick