Donald Trump’s campaign manager Corey Lewandowski has been charged by police with misdemeanor battery for allegedly grabbing a reporter in Florida earlier this month.

A new surveillance video released by the Jupiter Police Department shows the altercation, in which Lewandowski is seen grabbing then-Breitbart reporter Michelle Fields by the arm as she is walking along side the candidate.

Lewandowski and the Trump campaign have repeatedly denied the incident, which was also witnessed by a Washington Post reporter, ever occurred. Lewandowski called Fields “delusional” at the time. She later posted a photo of bruises on her arm.

Lewandowski appeared Tuesday morning at the Jupiter Police Department at the Department’s request, police and Trump campaign officials said. Trump’s campaign denied that Lewandowski was arrested. “Mr. Lewandowski was issued a Notice to Appear and given a court date. He was not arrested,” the campaign said in an unsigned statement.

But a spokesperson for the Jupiter Police Department told TIME that there’s no difference. “A notice to appear is an arrest,” said Adam Brown, the spokesman. “Mr. Lewandowski was released with a Notice to Appear in court.”

In the same statement, the Trump campaign denied the allegations against Lewandowski, and the candidate himself backed up his top aide.

“Mr. Lewandowski is absolutely innocent of this charge,” the statement said. “He will enter a plea of not guilty and looks forward to his day in court. He is completely confident that he will be exonerated.”

“Wow, Corey Lewandowski, my campaign manager and a very decent man, was just charged with assaulting a reporter,” Trump said Tuesday afternoon on Twitter. “Look at tapes-nothing there!”

Speaking at a press conference aboard his plane later on Tuesday, Trump elaborated, calling the incident “minor” and saying, “I think it’s a very, very sad day in this country when a man can be destroyed over something like that.”

Trumps rivals seized on the development.

“This is what we have come to expect from the Trump campaign,” Ted Cruz campaign spokeswoman Catherine Frazier said in a statement. “Unfortunately, this abusive behavior seems to be part of the culture of the Trump campaign.”

“Campaigns reflect the values of the candidate. I know ours does,” John Weaver, who is John Kasich’s top strategist, said on Twitter. “If this bully worked for John Kasich, he would have been fired long ago.”

A Jupiter Police Department document describes the March 8 incident as such: “Lewandowski then grabbed Fields left arm with his right hand, causing her to turn and step back. This motion cleared a path for Lewandowski to walk past Fields, allowing him to ‘catch up’ and get closer to Trump, who was walking during this entire incident.”

“Fields showed me her left forearm, which revealed bruising from what appeared to be several finger marks indicating a grabbing type injury,” investigating officer Marc Bujnowski wrote in the report.

If convicted, misdemeanor battery could result in up to one year in jail or 12 months probation, and a $1,000 fine. Lewandowski’s initial court date is set for May 4. 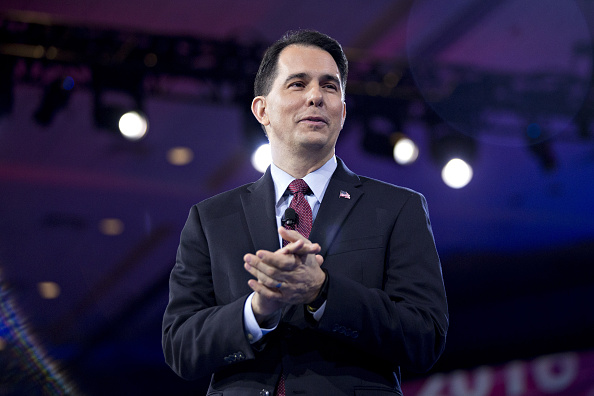