With Belgian officials struggling to explain how they missed crucial information leading up to Tuesday’s devastating Brussels bombings, local police in the northern Belgian city of Mechelen admitted on Friday that as far back as December, they knew where the sole surviving Paris attacker might be hiding in the Belgian capital, but failed to pass the address to the country’s anti-terrorist unit—even though Europe’s biggest manhunt in years was underway.

As details mounted about the gaffes and missteps of Belgian officials that might have averted this week’s bloodshed, U.S. Secretary of State John Kerry arrived in the city for talks with Belgium’s government about how to dismantle ISIS’s terror networks. U.S. officials told reporters that at least two Americans were among the 31 people killed in Tuesday’s suicide bombings, two which occurred in a crowded airport terminal, and a third on an underground train in central Brussels. ISIS has claimed responsibility. “We are all of us going to help,” Kerry told the Belgian Prime Minister Charles Michel at a joint press conference in Brussels. “We will renew our vow to come together against a common enemy to keep our people safe.”

Yet those assurances came amid increasing details about bungled intelligence gathering in the months before Tuesdays attacks, with Belgian officials overlooking crucial information or simply failing to share it within the country’s highly fragmented policing structure. On Friday, the local police chief of Mechelen, a small city 13 miles northeast of Brussels, said his department had received a tip in early December—nearly four months ago—about the possible whereabouts of Salah Abdeslam, the sole surviving attacker from the Paris massacre on November 13, which killed 130 people. Abdeslam, 26, had slipped back into Belgium during the hours after the Paris attacks, then hid in his Brussels neighborhood of Molenbeek, evading street-to-street police raids for months. Last Friday, a SWAT team finally nabbed him—at the exact address that a relative of Abdeslam had given Mechelen police last December.

After Belgium’s Dutch-language media broke the news on Friday, Mechelen police chief Yves Bogaerts told reporters that it was not clear back in December that Abdeslam might be hiding at that address, so his small department had not passed the address to the federal anti-terrorism unit responsible for hunting him down. “There was no information deliberately withheld,” Bogaerts told reporters in Mechelen. “A mistake was made internally in the police force.”

Belgian and French police have raced since Tuesday to dismantle the remnants of the terror network that they believe mounted both last November’s attacks in Paris, and this week’s Brussels attacks, using the Belgian capital as its base for bombmaking and operational planning. On Thursday night, French police foiled a planned terror attack during a raid on the Paris suburb of Argentieul, according to Interior Minister Bernard Cazeneuve. Police arrested Reda Kriket, 34, who was convicted in a Brussels court, in his absence, last year, for recruiting ISIS fighters. Cazeneuve said the attack plans were “in an advanced stage.” Belgian police arrested seven people in anti-terror raids, and conducted searches in Brussels’ Schaerbeek district, where Tuesday’s attackers had stashed large quantities of homemade explosives in an apartment. Also on Friday, police in Germany arrested two others with connections to the attackers.

Friday’s revelation that some Belgian police knew where Abdeslam might be months ago was just the latest in a long string of errors that might have prevented this week’s Brussels attacks. Officials believe that although the attacks were planned long before Abdeslam’s arrest last Friday, their timing might have been speeded up after the arrest, as police closed in on the network. Despite that possibility, interrogators failed to squeeze Abdeslam for details of plans for an imminent terror attack, according to Politico Europe, citing unnamed government officials on Thursday. That was despite the fact that police uncovered detonators and weapons in Abdeslam’s hideout.

Sources told Politico that interrogators had questioned Abdeslam only once, on Saturday, and only for one hour. After that interrogation, Belgian Foreign Minister Didier Reynders said in a press conference that Abdeslam had told interrogators he had been ready to “restart something in Brussels.” Yet interrogators apparently hesitated in hammering Abdeslam for details. “He seemed very tired and he had been operated on the day before,” one unnamed official explained to Politico, while another said interrogators “were not thinking about the possibilities of what happened on Tuesday morning.”

A third crucial error surfaced on Wednesday, when Turkish Prime Minister Recept Tayyip Erdogan told reporters that his country had warned Belgian authorities last summer that Ibrahim Bakraoui was a jihadist, after Turkish police arrested and deported him. Bakraoui, 30, was one of two men who blew themselves up in Brussels Airport on Tuesday, and his brother Khalid, 27, blew himself up in the Metro train car. “Despite our warnings that this [Ibrahim] was a foreign terrorist fighter, the Belgian authorities could not identify a link to terrorism,” Erdogan said bluntly. Under fire for that error, Belgium’s Interior Minister and Justice Minister offered to resign on Thursday, but the Prime Minister rejected their offer, and kept them on.

Intelligence analysts say that although all these errors look tragic in hindsight, they are perhaps understandable, given the huge numbers of suspected ISIS followers in Europe. E.U. officials estimate that about 5,000 Europeans have fought with jihadist groups in Syria and Iraq since 2012, and that between 50 and 100 people filtered back home last summer and fall with the mammoth flow of migrants into Europe.

“Look at the scale of the threat,” Moniquet says. “It is not dozens or hundreds of people, like during Al-Qaeda’s time. It is thousands. The services are overwhelmed.” He says he believes the Paris-Brussels terror network is “finished” after the attackers’ deaths this week and last November, and along with the arrests made since Tuesday. But he estimates that up to six other networks of those trained by ISIS in Syria might still be at large in Europe.

Friday’s revelation that Belgian police might have missed the chance to find Abdeslam months earlier highlighted the challenge of investigating terrorism—even when lines of communication are clearer. “It speaks again to how complicated the handling of such issues are,” Yan St-Pierre, CEO of Modern Security Consulting Group in Berlin, said by phone on Friday. “It is not just about having information. It is about what you do with the information after you have it. There were many lapses.” 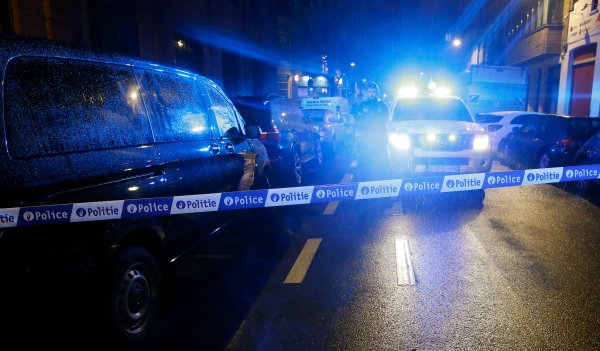 ISIS Attackers May Have Targeted Nuclear Power Station
Next Up: Editor's Pick