The investigation into a ring suspected of distributing almost $90 million of compromised vaccines across 24 Chinese provinces has now netted 130 arrests, though public anger has not been quelled by assertions that the improperly stored and transported drugs were in fact safe.

A mother and daughter from eastern China’s Shandong province are accused of distributing the tainted vaccines from 2010 until their arrest in April last year. However, the scandal only came to light late last week, as authorities attempted to trace conspirators. State media initially warned the drugs could cause paralysis or even death, though officials have since backtracked, insisting the only risk was a lack of effectiveness.

“The risk to children is lack of protection from the disease for which the vaccine was intended,” said a statement from the WHO in China.

Official insistence has failed to sway the Chinese public, though. “I am extremely angry and extremely sad,” says former HR manager Duan Wenxian, 36, whose only son is 3 years old. “What shall we do? Escape from China, or change society together?”

“I suggest everybody urges the government to release who bought the vaccines and what’s the punishment for those people involved,” outspoken doctor Tao Lina, of the Shanghai Center for Disease Control and Prevention, posted on China’s Twitter-like microblog Weibo. “That would be a real preventative inoculation.”

In an extraordinary step, the state-backed Global Times newspaper, considered a mouthpiece of the Chinese Communist Party, joined criticism of the government’s handling of the affair in an opinion piece and appeared to call for a loosening of media restrictions.

“Governments [sic] could have done a better job in guiding the media to quell the sweeping panic, but they chose the convenient way of putting harsh restrictions on media instead of seeking efficient interactions,” said an opinion piece published under the byline Sun Xiaobo.

The vaccine scandal is China’s largest in financial terms on record, and the most serious since 2008, when six children died and 300,000 fell ill after the chemical melamine was found to have been added to infant milk formula. Mistrust of locally produced drugs and health products has spurred a huge market in foreign imports, and hobbled attempts to build a commanding Chinese pharmaceutical industry.

On Thursday, Li Guoqing, head of the food-and-drug watchdog’s drug-supervision department, told a press news conference there were “certain loopholes” and “blind zones” that allowed the spoiled vaccines to be sold on the Chinese market for years without anyone checking.

Li also confirmed that the elder ringleader, a former doctor surnamed Pang, 47, was convicted of the same offense in 2009 but only received a suspended sentence. In addition, media reports on Friday allege a former Hebei pharmaceutical company executive involved in the scandal had been implicated in a similar case six years ago, in which about 100 children died or were physically impaired.

According to Dr. Yanzhong Huang, senior fellow for global health at the New York City–based Council on Foreign Relations, the recurrent nature of health scandals, combined with the perceived impunity of offenders, is gnawing away at trust in the Beijing authorities.

“This scandal seems to send the [wrong] message that vaccines are not safe anymore,” Huang tells TIME, pointing to how conspiracy theories regarding polio-immunization programs in Nigeria and Pakistan have undermined attempts to eradicate the disease.

“That concerns me as there is a lack of social capital in that people just don’t trust what the government says,” he adds. “Potentially it could present a challenge to the rule of the Communist Party.” 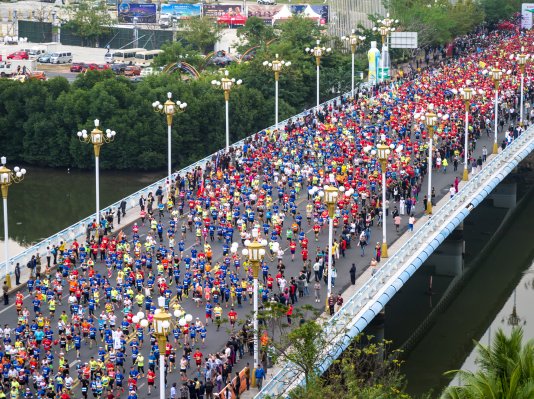 Thousands Injured In a Single Chinese Marathon
Next Up: Editor's Pick