Trump and Cruz: Your Wives Are Not Political Props

Dear Donald Trump and Ted Cruz: Your wives are not political props.

This all started Tuesday as voters in Utah and Arizona were going to the polls, when Trump tweeted, then erased, and then tweeted again a missile against Cruz: “Lyin’ Ted Cruz just used a picture of Melania from a G.Q. shoot in his ad. Be careful, Lyin’ Ted, or I will spill the beans on your wife!”

Trump was referring to a Facebook ad of a risqué shot of a nude Melania Trump lying on some furs that was featured years ago in GQ, complete with a tagline: “Meet Melania Trump. Your next First Lady. Or, you could support Ted Cruz on Tuesday.” The ad, run by an outside group backing Cruz, was clearly meant to target Mormon voters in Utah leery of Trump’s three marriages, his most recent to supermodel Melania, 26 years his junior.

Cruz won Utah with 69% of the vote; Trump came in third with 14% after Ohio Gov. John Kasich with 16% — which is perhaps why on Wednesday Trump retweeted a supporter’s tweet which showed a snarling Heidi Cruz’s face next to a gorgeous shot of Melania with this tag line: “No need to ‘Spill the beans,’ the images are worth a thousand words.”

Cruz defended his wife on Twitter and at a press conference called Trump a “sniveling coward” for attacking women. “Donald does seem to have an issue with women. Donald doesn’t like strong women,” Cruz said. “Real men don’t try to bully women. That’s not an action of strength. That’s an action of weakness. It’s an action of fear. It’s an action of a small and petty man who is intimidated by strong women.” Though, notably. When repeatedly pressed, Cruz refused to rule out supporting Trump, who has a lead of 274 pledged delegates, if he becomes the eventual nominee.

The latest exchange is just another example of Trump’s small hands tizzy, says Kelly Dittmar, a scholar at Rutgers University’s Center for American Women and Politics. “Instead of responding to the attack on Melania from the anti-Trump PAC by calling it out for the misogyny it represents, Trump played into the same type of objectification of women by endorsing a response that placed his wife’s — and Heidi Cruz’s — value in appearance alone,” Dittmar said. “This back-and-forth is yet another display of both men seeking to reinforce their masculinity in different ways, whether by — in Trump’s case — competing to be the candidate with the hottest wife, or — in Cruz’s case — by embodying the role of protector and defender of his family.”

Indeed, Cruz — who notably did not call for the Melania ad to be taken down — is no stranger to using his wife as a political prop. When he first announced his candidacy for president, he spent more time talking about Heidi’s baking talents than he did her highly successful Goldman Sachs banking career.

Cruz, seeking to burnish his social conservative credentials, buries his wife’s success behind her role of mother and supporter, says Michelle Swers, a professor at Georgetown University who studies women in politics. “In this anti-Wall Street climate her association with Goldman Sachs will be questioned,” Swers says. “As more women are in the workforce the careers of potential First Ladies will be scrutinized.”

A March Reuters/Ipsos poll found that half of all women had a “very unfavorable” view of Trump, up from 40% in a similar survey conducted in October. And a December Quinnipiac poll found both Trump and Cruz underwater with women in favorable/unfavorable standings.

A Republican presidential candidate has not won the women’s vote since Ronald Reagan. George H. W. Bush and George W. Bush only won the White House by mitigating the loss of women, who turn out on average 10 percent more than male voters, to the single digits. That gap would likely prove more difficult to close if Hillary Clinton becomes the first female nominee fielded by either party.

Especially if the Republican debate on women is limited to who’s prettier and how good a baker one’s wife is. 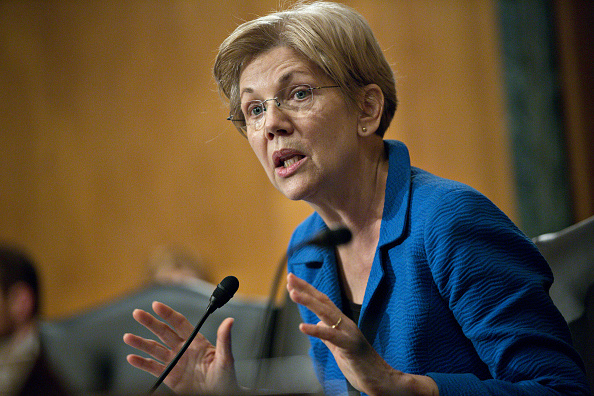 Elizabeth Warren: 'Time To Fight Back' Against Donald Trump
Next Up: Editor's Pick