Donald Trump flashes the thumbs-up as he arrives on stage for the start of a Republican presidential debate on Aug. 6, 2015, in Cleveland, Ohio.
Mandel Ngan—AFP/Getty Images
By David Kaiser

As Donald Trump moves nearer and nearer to the Republican nomination, history is becoming more fashionable. The media are awash with comparisons between Trump and Hitler and Trump and Mussolini, and Google searches for those pairs of names turn up 45 million and 2 million hits, respectively. Detailed analyses of Trump’s relationship to Fascism have appeared in major online publications. An anti-Trump Republican PAC is standing up an ad campaign explicitly comparing the candidate to Hitler. Even Mike Godwin, the inventor of “Godwin’s Law”—that any prolonged argument on the internet will end in a comparison of one’s opponents to Hitler—has encouraged us to go ahead and make such comparisons, provided they are carefully thought out and historically sophisticated.

The comparisons are inevitable, but Trump is not Mussolini or Hitler. And, no matter what you think of him, he is not by any stretch of the imagination a genuine Fascist. Fascism, National Socialism and Communism were products of their time, and our time is very different in critical ways. To put the matter simply, western society lacks the organizational skill to create a totalitarian movement. That is in itself a comforting fact—but unfortunately, we do not seem to be able to organize for the common good, either.

The first half of the 20th century was the most highly organized period in the history of western civilization. From the time of the First World War until around 1970, states exercised unprecedented political, military, and economic power. Between 1914 and 1918 every major nation drafted millions of men and sent them to their deaths of the battlefield. To pay for war, governments raised borrowing and taxation to unprecedented heights, repeatedly disrupting the world economy. These efforts brought down the old political order in countries such as Russia (1917), Italy (1922, when Mussolini took power) and Germany (1918 and again in 1933)—but, when they did, even more organized and hierarchical regimes took over.

Lenin created the Bolshevik party along military lines, with centralized leadership and strict discipline. Mussolini’s Fascist Party featured its own armed militia, the Black Shirts, and Hitler consciously copied it with his Brown Shirts. In fact, in the great crisis that destroyed the Weimar Republic between 1930 and 1933, three different uniformed militias—the Nazi SA, the Social Democrats, and the Communists—continually battled each other in the streets, killing one another by the hundreds. One of Hitler’s first acts after taking power was to turn the SA into an auxiliary of the police force, with the power to arrest political opponents. Tens of thousands of Communists and Socialists immediately filled new concentration camps. Stalin’s Russia used secret police to apply the same tactics on an even larger scale.

More than 80 years later, the United States suffers from some of the same problems as the Weimar Republic. Political divisions have paralyzed our government to the extent that the President will not even be able to fill a vacancy on the Supreme Court. The government keeps running only after surmounting periodic budget crises. The left and the right inhabit completely different intellectual universes and cannot agree on the simplest facts. Our political system seems to have lost the knack for producing great leaders. Large portions of the middle class have been wiped out. And in one respect the situation today is considerably more alarming: we have an astonishingly well-armed civilian population, and the danger that our millions of assault rifles might become political weapons cannot be ignored.

But this is not a Fascist moment. In fact, the United States lost its appetite for political organization several decades ago.

Donald Trump has proved adept at one of today’s most powerful propaganda platforms, but he has not started his own political party. He has not formed a network of Trump clubs, much less a Trump militia. There is a reason why he finds himself compared to Hitler—both built a mass following by appealing to constituents’ resentment—but unlike Hitler, all he seems to want is their votes. He is a man of the right, and the American right has been defined for half a century by its hostility to governmental authority. He may not be as anti-government as Ted Cruz or some of the Tea Party leaders in Congress—and if elected, he may well deploy the authority of the government against immigrants—but his declared economic policies indicate that he is far less pro-government than Republicans of the past like Eisenhower or Nixon. Should he be elected, he promises another round of tax cuts on the rich, and the erosion of governmental authority over our economy will probably continue. Hitler, on the other hand, mobilized the entire German population and economy to embark on a huge war of conquest.

The intellectual and political climate of the first half of the 20th century helped create totalitarian movements—but it had beneficial effects as well. In the United States, Franklin Roosevelt showed that democracy could also create a more organized society, mobilize resources on a vast scale and use them for the common good—both to fight economic injustice and privation, and to win the Second World War. After that war, European social democratic governments followed his example. Bernie Sanders, who is old enough to remember FDR’s death and who does support a highly organized government, is the last real representative of that tradition in American politics today. That is the real tragedy of our situation. While we are not about to produce a Hitler, we don’t seem to be able to bring forth a new Franklin Roosevelt either. Our political system is simply floundering, and seems likely to continue to flounder whatever the outcome of the election turns out to be. 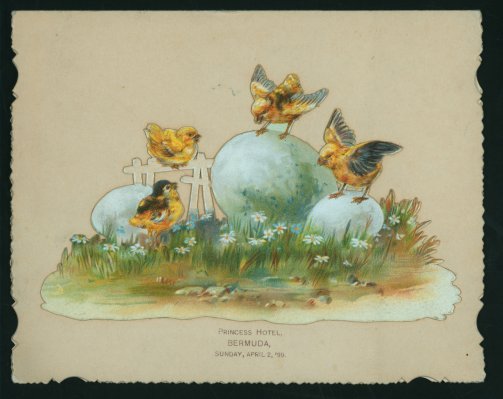 See 8 Tasty Easter Menus From History
Next Up: Editor's Pick