Think the U.S. Voting Age Is Too High? It’s Worse in Cameroon

On Election Day in Cameroon, people have the day off of work. They line up at polling stations across the country to drop their ballots into the ballot box. Like many young people in my country, I always stayed home.

In Cameroon, youths don’t know their rights. Although I became eligible to vote when I turned 20 years old, I wasn’t aware of the fact that constitutionally I was allowed to vote. It wasn’t until three years ago, when I was 24 years old, that I voted in an election for the first time.

My turning point was a peacebuilding training by the Network for Solidarity Empowerment and Transformation for All (NewSETA) Cameroon. This training served as a wake up call for me and 34 other young leaders about the non-involvement of Cameroonian youths in electoral and democratic processes.

When I finally cast my first vote in the 2013 municipal elections, it gave me a lot of power and courage. Being able to have a voice to choose a leader let me know that I could contribute to change in Cameroon. It motivated me to help other youths contribute to change.

In my country, you can get married at age 15, go to war at age 18. But you cannot vote until age 20. This is why I joined the NewSETA Vote 18 campaign. We are working to lower the voting age in Cameroon and get more young people involved in our democracy.

Earlier this month, on the eve of Cameroon’s 50th National Youth Day, the President addressed the nation on TV. He called young people the ‘Android Generation’ and encouraged youth entrepreneurship. In Cameroon, like in most sub-Saharan African countries, we hear that young people are the ‘surest guarantee for the future’, that they are the ‘future in the present’. And yet, adults still hold erroneous perceptions of young people.

The stereotype is that youth love an easy life. They are perceived to be easily manipulated and given to excesses. They are criticized for openness to imported ideologies they receive through social media and new technologies. In politics, youths confront a huge level of paternalism. They are belittled and viewed as inadequate. While it is possible to become a member of the parliament at a very young age, most parliamentarians are at retirement age.

62% of the entire population of Cameroon is under 25 years old and the current median age is 18.4 years. Many of these young people feel disconnected from the political process. They are held back by the lack of access to information, by hierarchical relationships between the old and young, and by legal standards that disadvantage the young. Or they don’t vote because the system is so corrupt they shun away from it. They see that one person is the winner all the time because of rigged votes and corrupt practices. They don’t think their vote will change the result.

Youth in Cameroon are frustrated by poverty and unemployment, and they are tired of corruption. I believe that if young people get into voting, there is a big possibility that they will make the right choices for the country.

My vision is to ignite civic participation in Cameroonian youths, instill civic values at a younger age, and enable our country to measure up with its commitments towards youths.

Before 2013, I didn’t know I could make a difference. I didn’t learn about my rights in school or hear about youth political participation on TV or radio. Now, I am working with the nationwide Vote 18 campaign to reach out to more youths. We are going into schools, creating democracy clubs, and holding capacity trainings. I recently hosted a radio program on youth participation in democratic and electoral processes. During a call-in session, many young and older people participated in the discussion.

The world is now a global village and technology has become essential to youth activism. As a NewSETA Ambassador I started an online policy advocacy campaign on Causes to get Cameroonian youths in our country and in the diaspora involved in the movement. Our petition urges the Cameroonian House of Assembly to lower the voting age to 18.

We still have a long way to go. Most parliamentarians and government leaders remain indifferent about it all. They won’t come out clearly for or against a lower voting age. Instead, they will let it turn around their tables and delay the passing of the bill.

We need to make ourselves heard. Once young people become a force in politics, it’s going to cause a lot of change in the whole Cameroonian system.

Emilia Epeti Miki is a contributor from Cameroon. This piece was originally published on World Pulse. Sign up to get international stories of women leading social change delivered to your inbox every month here 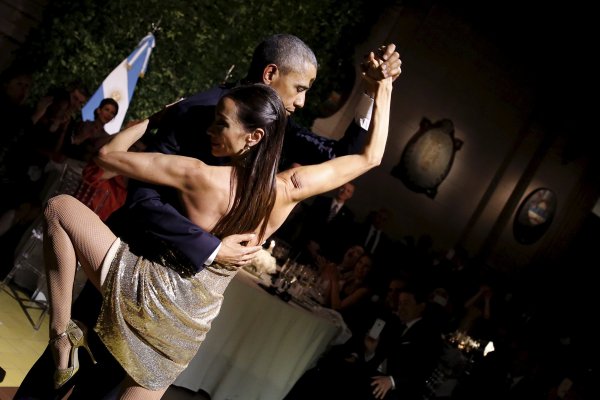 Obama’s Wave and Tango Trump Terrorism
Next Up: Editor's Pick