Passengers and airport staff are evacuated from the terminal building after explosions at Brussels Airport in Zaventem, Belgium, on March 22, 2016
Laurent Dubrule—EPA
Ideas
By Engy Abdelkader
Engy Abdelkader is Assistant Director of Georgetown’s Bridge Initiative and a professor of international terrorism and human rights at the Edmund A. Walsh School of Foreign Service.

In less than a week, we’ve witnessed terrorist attacks in Belgium, Turkey and Mali that are nothing short of tragic. As government officials meet to discuss security measures and responses, it would be helpful to explore potential root causes underlying violent extremism by Muslims in Western societies.

Some of you may be thinking: Maybe Donald Trump is right, “Islam hates us.” But violent extremists make up less than 1% of the entire Muslim global community. Most Muslims reject terrorism.

In fact, polls from Pew, Zogby and the Doha Institute show that strong majorities in Muslim countries view ISIS’s ideology as a perversion of Islam. They attribute violent extremism to corrupt authoritarian regimes, and they think the long-term solution lies in more democratic governance.

In the decade following the 9/11 terrorist attacks, right-wing extremists have killed more Americans than those who self-identify as Muslims have. According to a 2015 Duke study, Law Enforcement Assessment of the Violent Extremist Threat, 74% of American law enforcement agents see anti-government extremists as a top terrorist threat. In contrast, only 39% see religious violent extremism in the same light.

Similarly, in Europe, fewer than 2% of all terrorist attacks in recent years were religiously inspired. Right wing-extremists and ultra-separatists groups were responsible for far more violence.

If you think this sounds strange, that might be related to the way some Western news media cover terrorist attacks. According to research from Media Tenor, nine out of 10 news stories about Muslims and Islam in the U.S., U.K. and Germany are about war or terrorism. In other words, most of the news stories we see are unrepresentative of the minority faith community, which is also the second largest religion in the world today.

So what should we do about the tiny fraction of Muslims committing such unspeakable violence such as what we saw in San Bernardino, Paris and Brussels?

New research findings from Stanford may prove instructive while highlighting the dangers posed by Islamophobia. The study, Belonging Nowhere: Marginalization & Radicalization Risk Among Muslim Immigrants, looks at factors that may contribute to the risk of radicalization among Muslim immigrants in the West. It finds that more inclusive policies facilitating integration may guard against terrorist recruitment.

Essentially, Muslim immigrants and minorities who feel “culturally homeless”—an inability to relate to the home or new culture they are in—may be attracted to a group that offers a strong sense of belonging. Islamophobia, including xenophobic political rhetoric (that excludes refugees), exacerbates cultural homelessness because it erodes a sense of purpose while feeding the extremist narrative that our societies are anti-Islam and anti-Muslim.

Rather than allowing the acts of a small minority of extremists to brushstroke the vast majority of Muslims, policymakers should help Muslims integrate by allowing them to preserve their faith identity while also adopting the cultural identity of their country. In this way one can be seen as Muslim and American or Muslim and European just as one can be seen as Catholic, Protestant, or Jewish American.

While Stanford’s study focused on American Muslims, its findings can be applied to a European setting where Islamophobia has grown exponentially—in schools, at work and on the street. 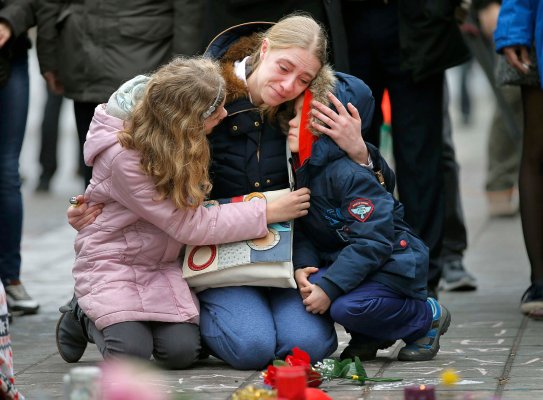 The Hard Lessons the World Has Learned from Terror
Next Up: Editor's Pick