The Invisible Fight for Delegates

With the odds of a contested convention rising, the Republican National Committee is beginning serious preparations for the party to enter the convention without a presumptive nominee—the first time since 1976—and for multiple nominating ballots on the floor—for the first time since 1948. The remaining candidates are stepping up their preparations as well, looking to secure delegates formally pledged to rival campaigns who would defect on subsequent ballots. While about 95% of convention delegates are bound on the first ballot, more than 50% are unbound on the second, and by a third ballot, nearly all are free to vote for whomever they want. Selecting those delegates is the true invisible primary this cycle, taking place in state party meetings and county and district conventions across the country, as Ted Cruz leads the fight to win over Donald Trump delegates and Trump’s campaign plays catch-up.

John Kasich has no mathematical path to the nomination and his candidacy is frustrating many anti-Trump Republicans who worry he will spoil potential Cruz opportunities to steal delegates from Trump. Cruz’s campaign has been emphatic that it believes Kasich is playing a spoiler, though Kasich’s campaign maintains he can win in Wisconsin, New York and New Jersey. Fourth in the delegate count, even if Kasich does win states, he’ll be hundreds of delegates behind his rivals at a potential contested convention, and critics argue there’s no path for him there.

In the wake of the latest attacks in Belgium, foreign policy is again front-and-center in the presidential race, as Trump wouldn’t rule out using nuclear weapons against ISIS and reiterated his call for a temporary ban on all Muslims from entering the country, as Cruz called for surveillance and policing of Muslim communities in the U.S. The tough message may make electoral fodder in a primary, but is the sort of rhetoric GOPers like Lindsey Graham and Jeb Bush condemned on the campaign trail. (Both are now endorsing Cruz.) Meanwhile, for Hillary Clinton it’s created an opportunity to highlight her foreign policy credentials as she previews her general election arguments against her would-be opponents. Clinton blasted both candidates in a speech Wednesday that was aimed at Republicans as well as Democrats.

President Obama weighs into the 2016 race to condemn GOP comments on Muslims. Speaker Paul Ryan rejects the negative tone of the Republican presidential race and apologizes for past statements of division. And why the anti-Trump effort may come down to Wisconsin.

“I just left a country that engages in that kind of surveillance which, by the way, the father of Senator Cruz escaped, to America, the land of the free. The notion that would we start down that slippery slope makes absolutely no sense.” — President Obama in Argentina on Ted Cruz’s plan to increase surveillance in Muslim neighborhoods

“If Donald wants to engage in a character fight, he’s better off sticking with me because Heidi is way out of his league.” — Ted Cruz responding to Trump threatening to “spill the beans” on his wife

The Obamas Dance the Tango in Argentina [TIME] 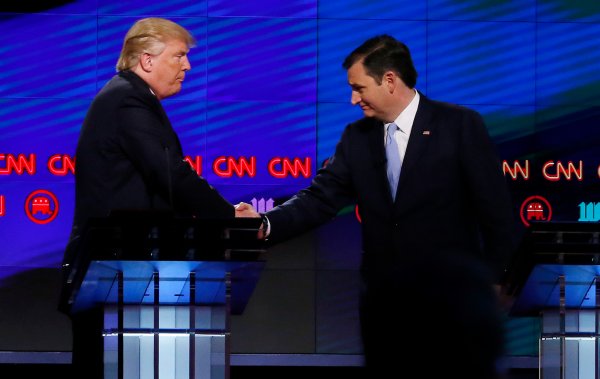 Trump and Cruz Continue Twitter Bizarre Battle Over Their Wives
Next Up: Editor's Pick