China's Premier Li Keqiang, right, talks to Nepal's Prime Minister K.P. Sharma Oli during a signing ceremony at the Great Hall of the People in Beijing on March 21, 2016
Lintao Zhang—Pool/Reuters
By Rishi Iyengar

Since K.P. Sharma Oli became the Prime Minister of Nepal in October 2015, he has made two overseas trips. The first of those, last month, was to India. The second, taking place this week, is to China.

The choice of those two countries in quick succession, and the objectives of Oli’s respective visits, may signal a subtle geopolitical shift for the, landlocked nation, which is situated between the two giant neighbors.

Nepal has traditionally been dependent on its southern neighbor India, through which around 65% of its trade passes. The Himalayan country’s crucial dependency on India was underscored late last year, when protesters from the Madhesi ethnic community — claiming that Nepal’s recently promulgated constitution discriminated against them — blocked key checkpoints and prevented the passage of essential goods from India for nearly five months.

Nepal accused the Indian government of sympathizing with the Madhesi protest and abetting the blockade, which resulted in a shortage of fuel, medicines and other vital supplies that nearly crippled the country. India has consistently denied the claim, even though it too had criticized the Nepalese constitution.

“People are still questioning the motive of our southern neighbors,” says Subhash Ghimire, editor in chief of the Republica, a Nepali daily. “The general public here is still not very convinced that India wouldn’t do something like that again.”

As relations with India soured, Nepal’s northern neighbor China came to the rescue with a deal to supply a third of the country’s required petroleum. The deal signaled to Kathmandu the importance of diversifying its trade away from India.

“[The Nepal government] has been talking about opening transit to China, so that in times of crisis, like we faced the last couple of months, we can have some alternatives,” Rishi Raj Adhikari, executive director of the government-run Institute of Foreign Affairs (IFA) in Kathmandu, tells TIME.

On Monday, soon after landing in Beijing, Prime Minister Oli signed a transit agreement that includes access to Chinese ports as well as the potential construction of rail links between the two countries. A subsequent joint statement released on Wednesday said a more comprehensive version of the petroleum deal is also in the works.

“At the psychological level here in Nepal I think it’s a huge boost,” Ghimire tells TIME. “It’s a very timely visit, and the agreement definitely signifies it.”

Although Oli claimed his February trip to New Delhi, days after the blockade ended, restored trust and brought bilateral relations back to normal, it was widely seen as something of a damp squib. Several agreements were signed, but most of them — as the Himalayan Times reported — were the outcome of earlier negotiations. The lack of a bilateral joint statement during the visit also raised several question marks, with rumors that India was still not prepared to publicly endorse the Nepalese constitution as Beijing unequivocally did this week.

Even as Nepal looks northward, however, experts feel it cannot afford to spurn its southern neighbor and longtime ally.

“You have Nepal somewhat difficultly positioned, because clearly it cannot alienate either [China or India],” says Alka Acharya, director of the New Delhi–based Institute of Chinese Studies. “The Chinese have proved more than responsive to what they feel are Nepalese concerns about India.”

Adhikari, the IFA director, maintains that Nepal has no intention of diluting its relationship with India through China, rather seeing itself as a “vibrant bridge” between the two. But the Indian government has long been wary of China’s efforts to establish trans-Asian supply routes through its “one belt, one road” initiative — which Oli enthusiastically endorsed this Tuesday — seeing it as an effort to encroach on India’s sphere of influence.

Nepal is by no means China’s only foothold in South Asia, Acharya clarifies, with India’s other neighbors Pakistan, Bangladesh and Sri Lanka already participating in various aspects of the Chinese plan.

“Nepal’s specific geopolitical location is making that extra edge,” she says. “It’s not as if [the Chinese] aren’t pushing the same agenda with India’s other neighbors, and they’re finding takers, but Nepal evokes particular resonance because of its particular complications between India and China.”

Wedged between the world’s two most populous nations, the prevailing notion is that Nepal is well positioned but must tread carefully going forward.

“The relationship so far with China has been that whenever something goes wrong with India then we look up to the northern neighbor,” says Ghimire. “If we start playing the China card or the India card, I don’t think that’s going to help us.”

Acharya explains that “deft diplomacy” on Nepal’s part must work in tandem with “bold thinking” by India and a degree of Chinese understanding of Indian concerns in the region.

“Otherwise there’s going to be sulking on one side and pushing on the other,” she says, “and Nepal in the end is going to feel stifled rather than liberated.” 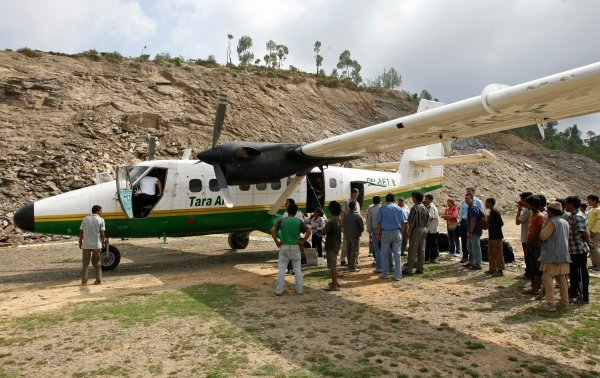 23 Dead in Nepal Airplane Crash
Next Up: Editor's Pick