Donald Trump leads the field of potential Republican nominees, but could face a hard time in the general election, according to a new poll.

In a Bloomberg Politics national poll released Wednesday some 63% of Republican voters would back Trump as the nominee if he has the most delegates come their national convention in July—echoing Trump’s argument against the GOP establishment.

If Trump were the nominee, however, the billionaire could face a tough fight with Democrat Hillary Clinton, who would crush him in a general election match-up—54% to 36% respectively.

The only current Republican contender who could potentially win against Clinton in November, according to the poll, is Ohio Gov. John Kasich, beating the former Secretary of State by 4 points.

Kasich and other Republicans are hoping that Trump will fail to reach the required number of delegates needed to clinch the nomination—1,237—and that they can oust the front-runner at a contested convention.

Of those voting for Kasich or Ted Cruz in the Republican primary race, just 57% say they’re doing so out of genuine support for their candidate, not to stop Trump.

Trump’s favorabillity rating is low, with 68% of Americans viewing him unfavorably, while 53% see Clinton that way. That is a 13% rise in dislike of Trump since a November Bloomberg poll. 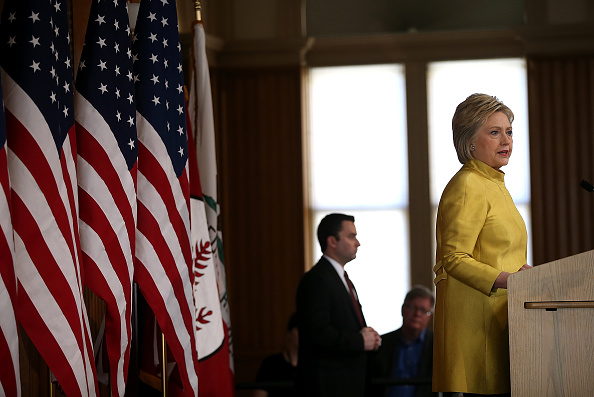 Clinton Blasts Trump and Cruz on Counterterrorism
Next Up: Editor's Pick