The Omar family’s little nylon tent stands near the edge of the refugee camp at Idomeni, in northern Greece, close enough to the roadside to get splashed by passing trucks. They’ve been living there since the end of February, as have thousands of other asylum seekers, mostly from Syria, Iraq and Afghanistan, who became stuck in Greece after Europe began to close its borders to transiting migrants earlier this year.

The Omars, like many of the Syrians at Idomeni, aren’t used to the camp’s abysmal conditions. Back in their hometown of Aleppo, before it became a battleground, they owned an apartment near the city center, and enjoyed a comfortable, middle-class life. It was the country’s civil war that forced them to flee along with millions of other Syrians.

The family’s eldest child, 13-year-old Zeinab Omar, clearly recalls the war approaching, the sound of explosions growing louder until she could feel the little earthquakes they produced. “We were in our room and could hear the bombs,” she says. “So we went up on the roof to see what’s happening, and saw the rockets falling from everywhere.”

In one of her most vivid memories, Zeinab ran down the stairwell of the family’s home and moved aside a heavy potted plant. She remembers a small hole in the wall. Looking through it — as into another world, a nightmarish one — she could see dead bodies strewn about the street and soldiers going house to house with guns. That same night, her uncle came to warn the family that they had to run — otherwise the forces of Syrian President Bashar Assad would come and kill everyone in the house. They took his advice.

What followed for Zeinab was a haze of heavy luggage, filthy safe houses and nauseating trips on buses, boats and taxis that took them first to Lebanon and then all the way through Turkey. Throughout the trip, Zeinab’s father Saeed spent down the family’s savings on the cost of transportation, in particular the high fees that smugglers charged to sneak them across national borders.

When they reached the western coast of Turkey, one smuggler took most of the family’s money, promising that it would buy them all a ticket to Greece aboard a rubber dinghy. Instead he made off with the cash and disappeared. They didn’t have much time to borrow or earn some more. This winter, the countries along the migration trail through Europe began gradually restricting the number of asylum seekers they allowed to pass, and rumors circulated in Turkish refugee camps that Europe would soon shut its gates to them. By early February, Saeed managed to scrounge up enough money to send his wife and youngest son to Greece, promising that he would soon follow with Zeinab and her younger sister Diana, who is 6.

Read More: Syrian Refugees Say No Deal Will Prevent Them From Reaching Europe

It didn’t quite work out as planned. Zeinab’s mother managed to reach the Netherlands and apply for asylum within a week of arriving in Europe. But as the rest of the family reached the north of Greece at the end of February, the border to Macedonia slammed shut in their faces. They have been stuck at Idomeni ever since, their family separated.

What seems to weigh on Zeinab most is all the responsibility. Without her mother around, the 13-year-old has become the lady of the house — or in this case, the tent. Beneath the seemingly endless patter of the rain on its roof, she sleeps huddled together with her father and sister every night. By day she helps her aunts cook and clean, and looks after her younger sister and cousins. The extended family and some friends from Aleppo, about 10 people in all, have formed a semicircle of tents around the fire pit that has become their hearth.

It is not clear whether they will ever be allowed to travel onward. Under the deal that the European Union finalized on March 18 with Turkey, the migrants who are stranded in Greece are meant to stay there, apply for asylum and move to more permanent shelters. In the Netherlands, Zeinab’s mother may be able to apply for the family to be reunited. But realistically, that process could take a year or more to come through, assuming it ever does.

So for now, the Omars are forced to make due at Idomeni. Saeed spends much of his days standing in line to charge his cell phone so he can share news with his wife. For a few days in March, Zeinab got a break from the monotony of her routine when I met her at the roadside, near her tent, and suggested making a video about her life. She readily agreed to let me follow her around and to tell her story.

It seemed to make her feel exceptional, and some of her cousins got jealous over all the attention that Zeinab received. But her story isn’t all that unique. Zeinab is just one among the thousands of children stranded at Idomeni, each with the same sorts of memories of war back home, and the same dreams of reaching asylum somewhere in Western Europe. Their chances of making it any time soon are no better and no worse than Zeinab’s.

Read More: These 5 Facts Explain Why Europe Is Ground Zero for Terrorism 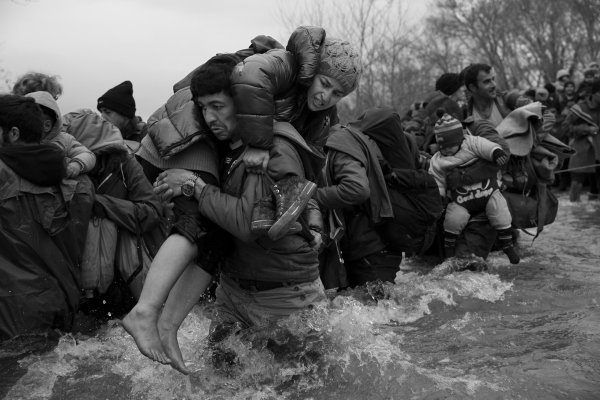 Inside the Harrowing Night Hundreds of Refugees Tried to Escape Greece
Next Up: Editor's Pick