The Feminist History of the Jewish Holiday of Purim

The celebration of Purim has become something of a Halloween-like celebration for Jewish Americans. The holiday, which begins Wednesday night and commemorates the biblical story from the Book of Esther of how the Jews were saved from persecution during the time of the Persian Empire, is typically celebrated with costumes and cookies. But, though most of the main characters in the story are men—Mordechai, leader of the Jews; King Ahasuerus; and his evil anti-Semite adviser Haman—the story has also earned recognition for its perceived feminist message.

Here are the basics of the Purim story, as told by Dena Klein, a rabbi at Chavurat Tikvah in New York City: “King Ahasuerus loved to have parties and he had this giant event where he asked his wife Vashti to dance for him,” she says. “But Vashti refused, so he sent her away to be executed and held a beauty pageant to find another wife, which is how we got to Queen Esther.” In the story, Esther, whose cousin Mordechai was a leader in their Jewish community, kept her religion to herself until Haman, one of the king’s advisers, hatched a plan to exterminate the Jews. By speaking up, Esther saved her people—and in the end Haman was the one executed on the gallows he had hoped to use to hang Mordechai.

As with most biblical stories, it’s hard to say just how much historical truth lurks within the Purim story. But looking at more recent history, it’s clear that Esther and Vashti do have a real history as feminist symbols. Both, in their own ways, refuse to go along with their husband’s wishes. Esther, who carries the weight of the story, continues to evolve just as feminism does—last year, one writer called her “the Beyoncé of the Megillah [Book of Esther]”—but it’s Vashti who has become the surprise star.

As early as the 19th century, her resistance to her husband’s wish to use her as a sex object made her an icon for early feminists. Harriet Beecher Stowe wrote in 1878 that Vashti’s decision was a “first stand for woman’s rights” and that “we shall stand amazed that there was a woman found at the head of the Persian empire that dared to disobey the command even of a drunken monarch.” About 20 years later, the Woman’s Bible commentary put together by suffragist Elizabeth Cady Stanton called Vashti “a sublime representative of self-centred womanhood” who rises “to the heights of self-consciousness and of self-respect.”

Years later, when the modern feminist movement emerged, Vashti returned to the spotlight. Hanna Kahat, who founded the religious feminist forum Kolech, told Israeli newspaper Haaretz in 2008 that Vashti further rose to feminist fame in the 1980s in the U.S. and then in Israel. It was during that decade that Alice Laffey, an expert on women in the Old Testament, noted that it was not surprising that Vashti appealed to modern feminists more than Esther did, as “buried in Esther’s character is also full compliance with the patriarchy.” After all, to many women, Vashti was a symbol of the women excluded from traditionally male customs in Judaism.

Today, that feminist perspective is a big part of the way Klein tells the story to her congregation. She remembers no one wanting to be Queen Vashti in the Purim plays when she was growing up. “But today, I really try to encourage the girls I’m teaching to embrace her as a hero. She’s busy and she stands up for herself. There’s this very strong powerful message about Esther’s opportunity, too,” she says. “There aren’t that many stories in the Bible that feature women as heroines.”

Klein says the story’s message can transform with each celebration.

Rabbi Stephanie Ruskay of the Jewish Theological Seminary agrees, noticing a parallel between the story of Purim and the modern-day political landscape.

“There’s someone who thinks the rules don’t apply to them and who thinks less of people who are different,” she says. “And there’s a candidate who is a woman with a strong voice who needs to find ways in which she can be heard.” 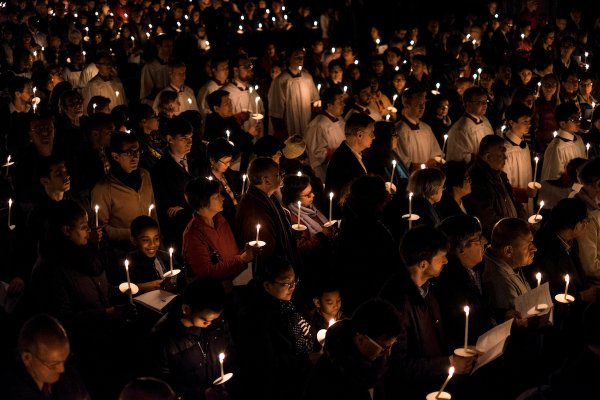 The Problem With Seeking the True History of Jesus' Last Days
Next Up: Editor's Pick