Brothers Khalid and Ibrahim el Bakraoui have been named in local media as the suicide bombers in Tuesday’s attacks in Brussels that killed about 34 people and injured more than 100.

Belgian public broadcaster RTBF said police sources had confirmed the names of the two men, who were previously known to local police, the BBC reports.

Two explosions were detonated in the busy departures hall of Brussels Zaventem Airport on Tuesday morning and were shortly followed by another deadly blast at the Maelbeek Metro station, which is close to the European Union’s headquarters. The latest reports estimate that at least 11 people were killed at the airport and 20 in the metro explosion.

A third would-be bomber is said to have escaped the airport without detonating his explosives-packed suitcase. On Wednesday, authorities reportedly detained a man named Najim Laachraoui, according to Reuters. Laachraoui was wanted by police before Tuesday and has been named as a bomb maker and an accomplice of Salah Abdeslam.

Tuesday’s attacks came after Belgian police arrested Abdeslam, a key suspect in the deadly Paris terror attacks in November. Police have said they found a fingerprint of Abdelslam at an apartment rented by Khalid el Bakraoui.

Mourning Around the World After the Brussels Attacks 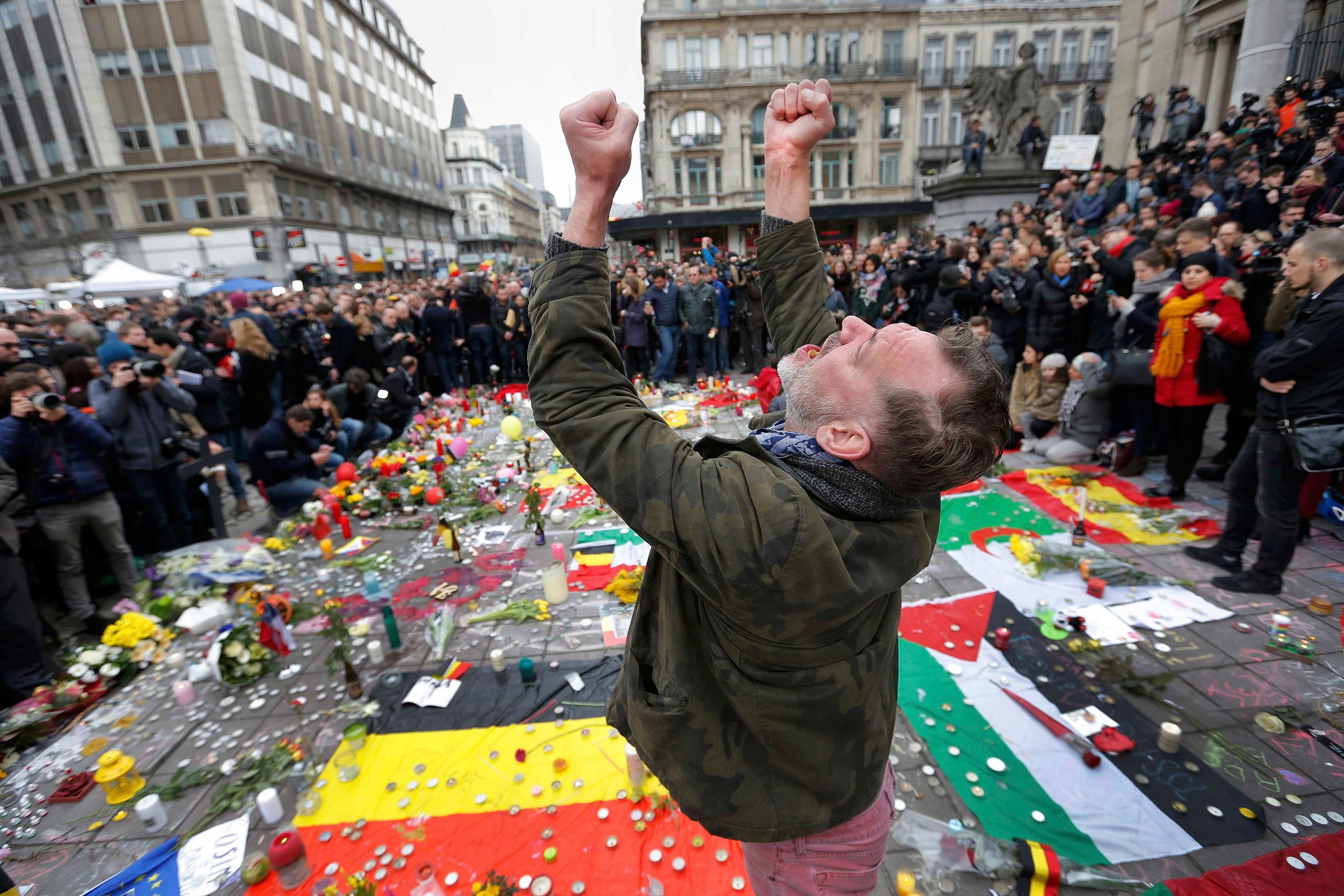 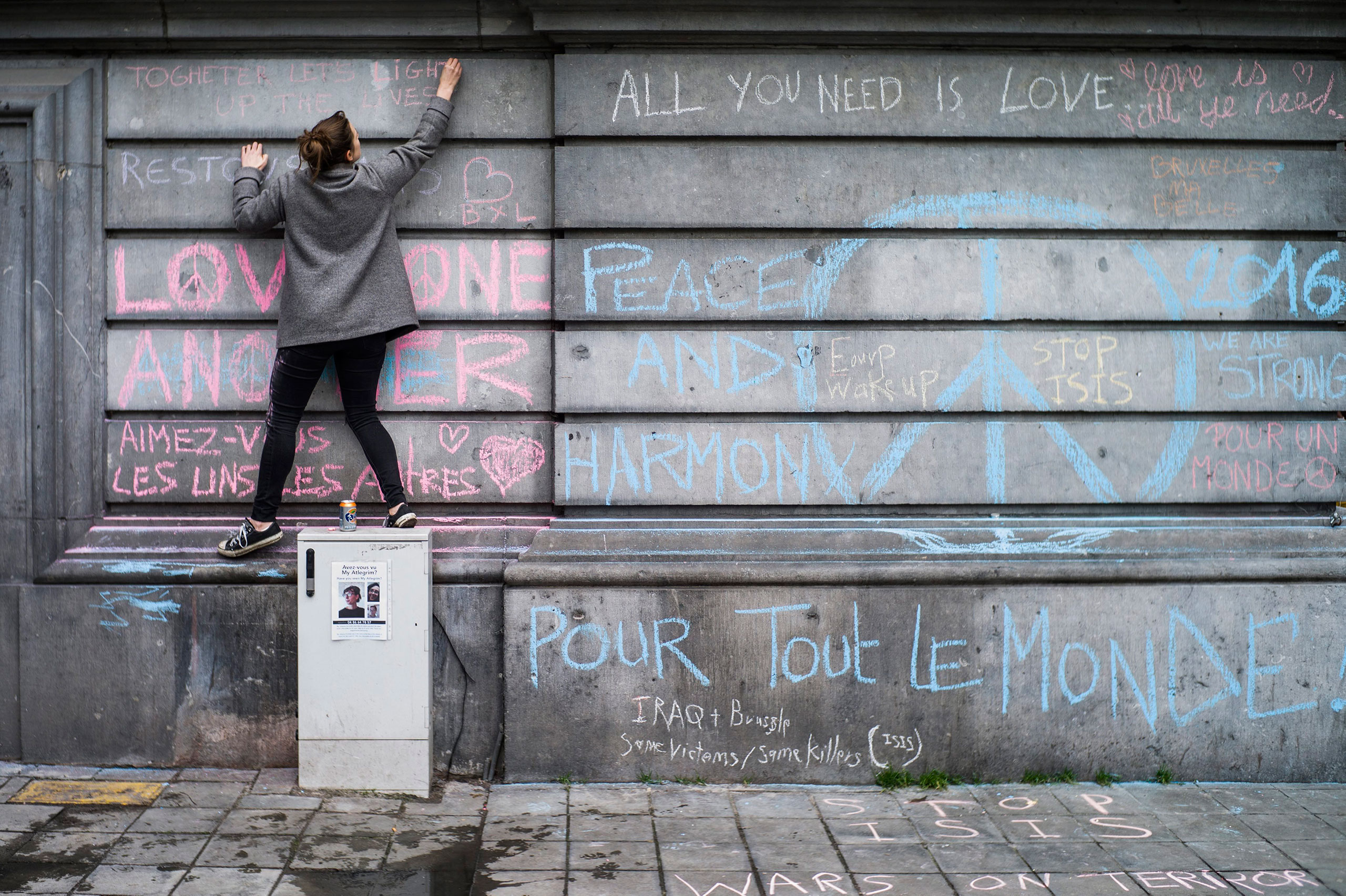 People write messages in a tribute at Place de la Bourse to the many people killed and injured in multiple terrorist attacks the day before across Brussels, Belgium, March 23, 2016.
Yoan Valat—EPA 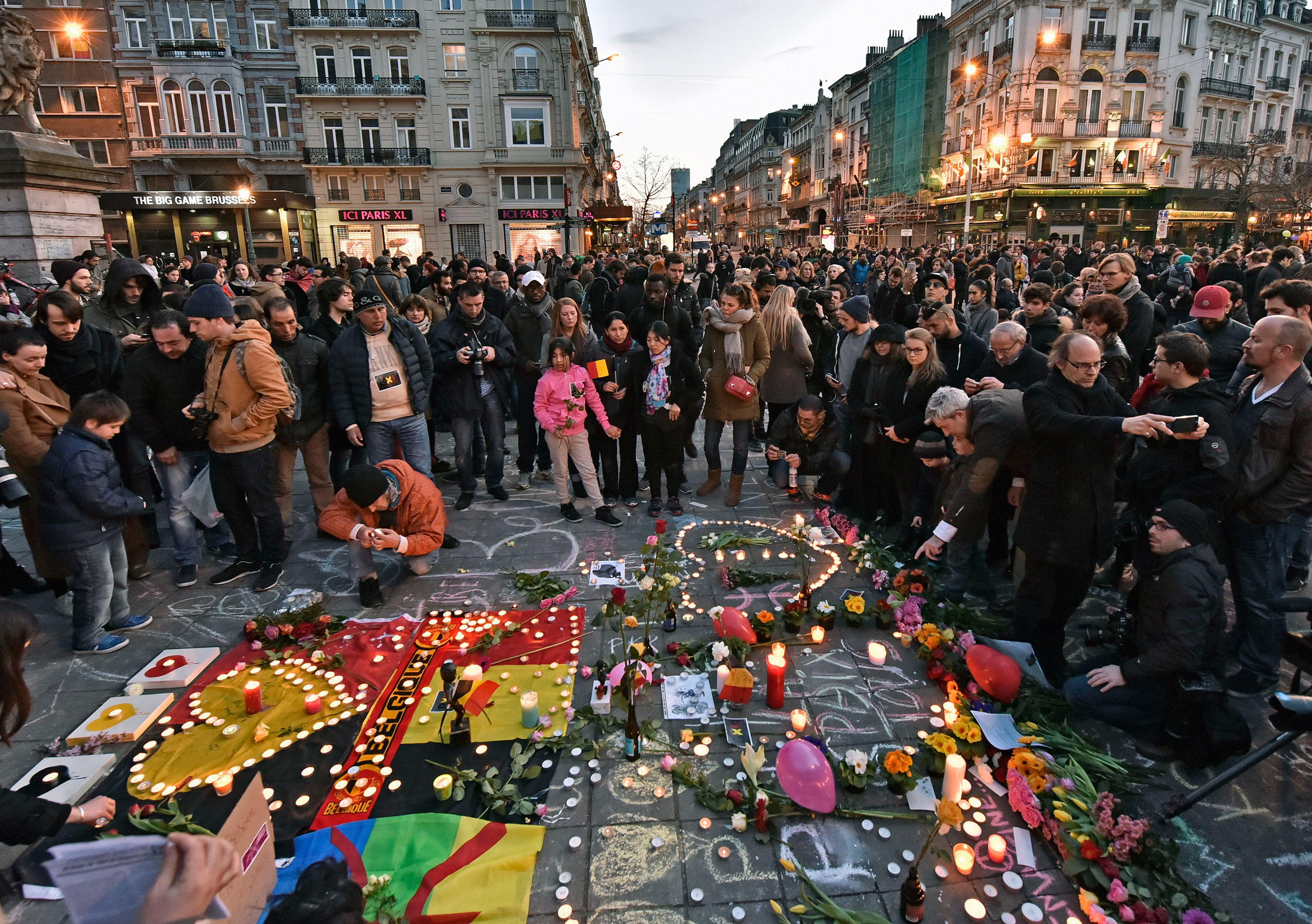 People bring flowers and candles to mourn at the Place de la Bourse in the center of Brussels, Belgium, March 22, 2016.
Martin Meissner—AP 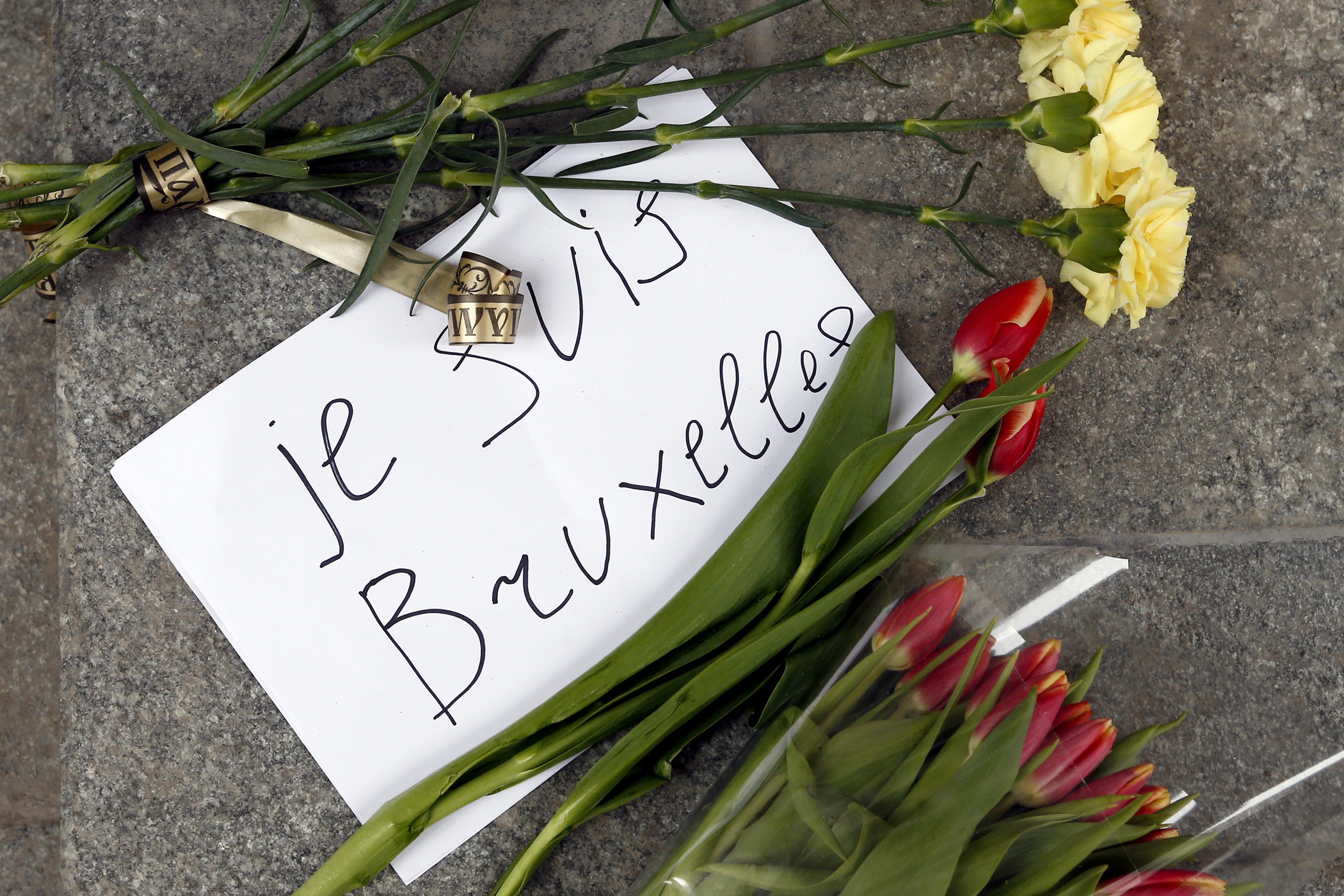 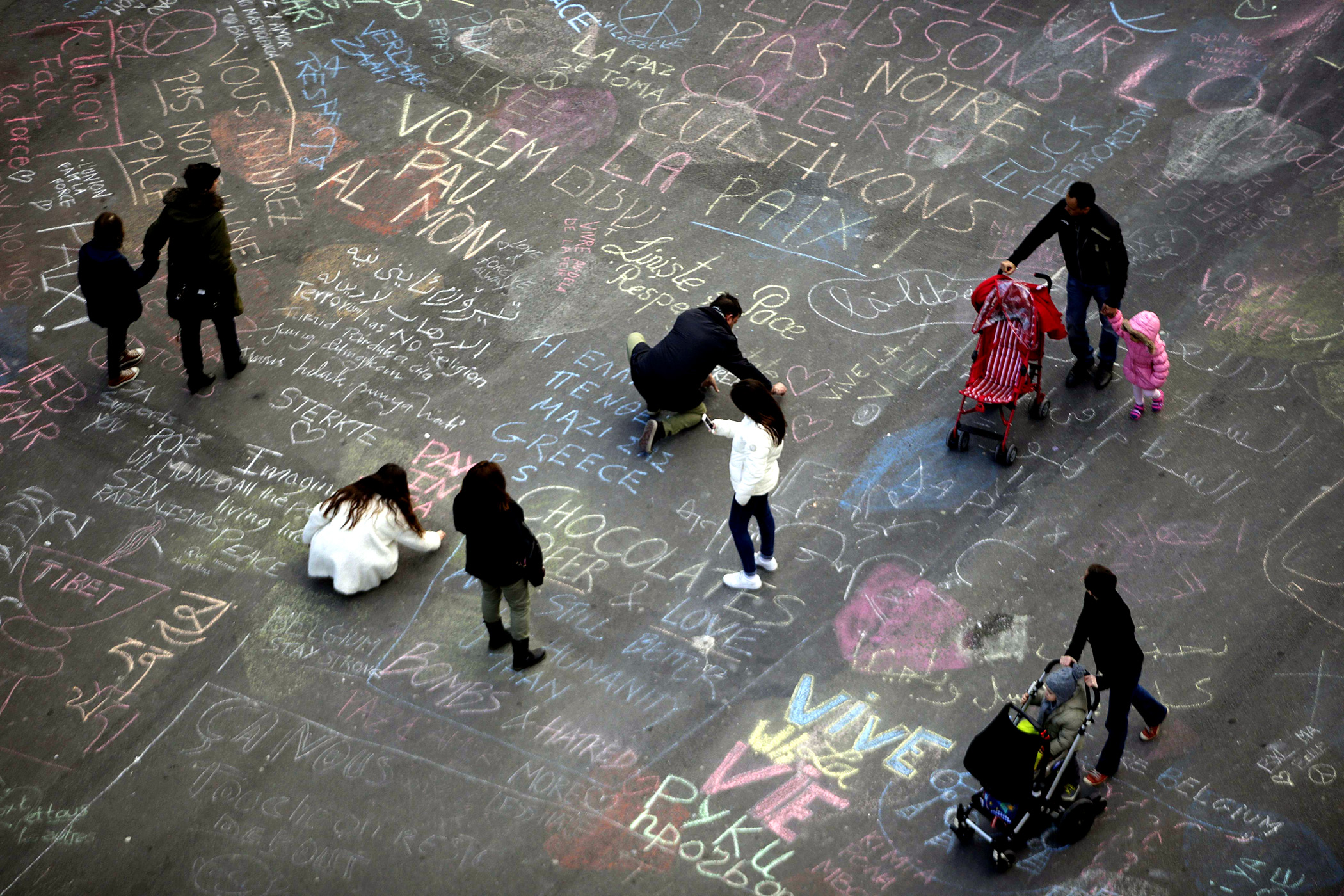 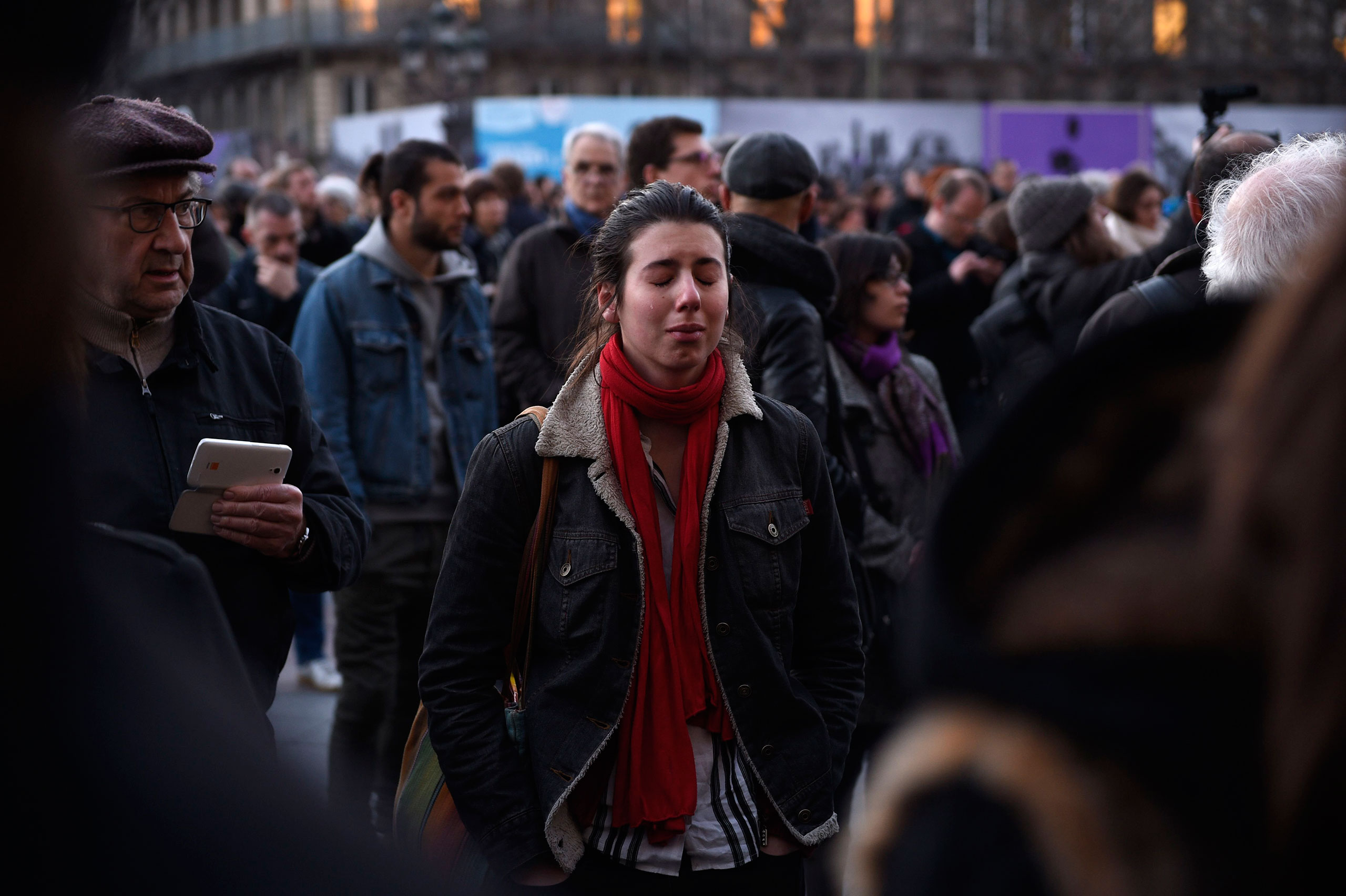 A woman mourning the victims of the Brussels terrorist attacks cries in front of the the city hall of Paris where people gather as a tribute, March 22, 2016.
Martin Bureau—AFP/Getty Images 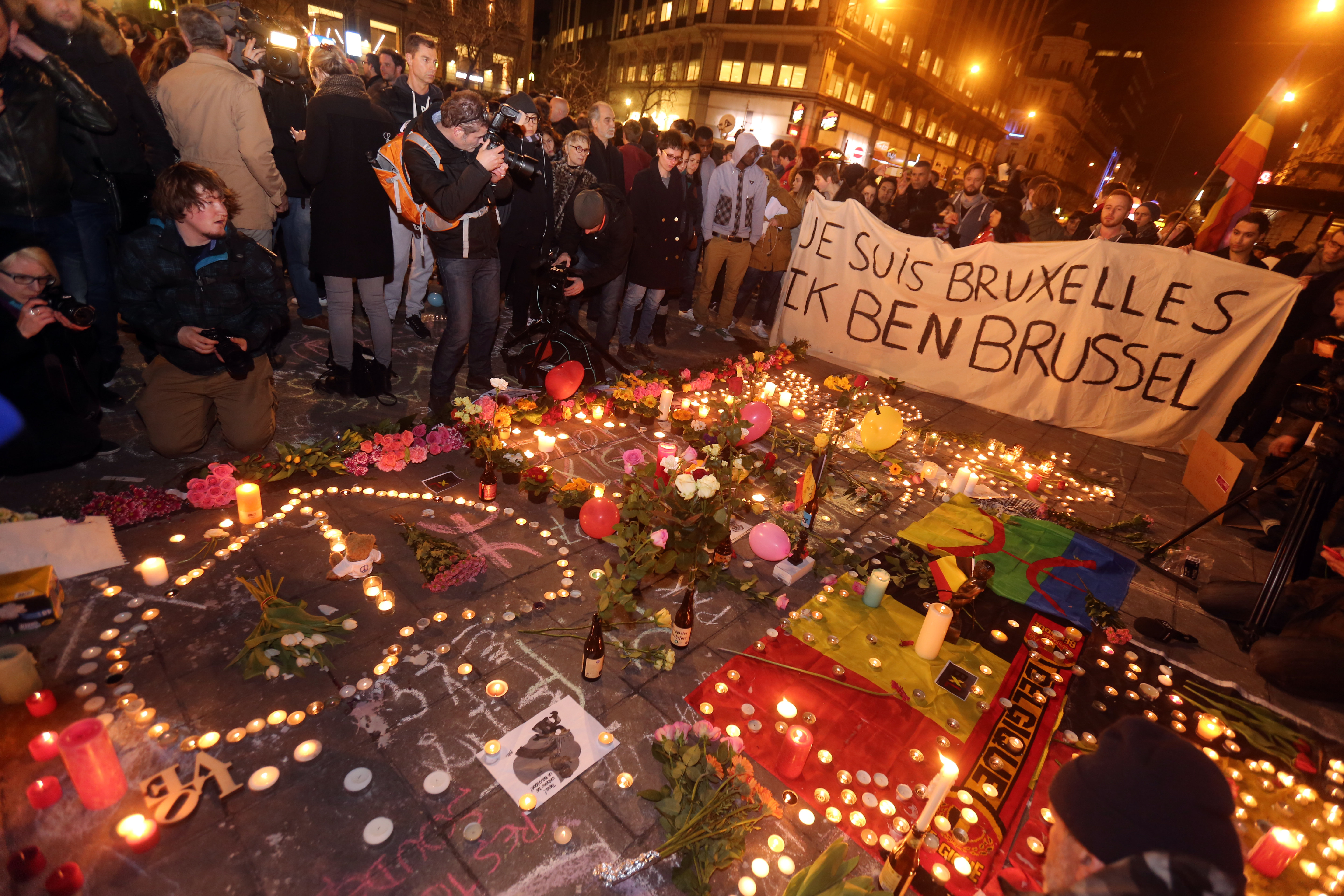 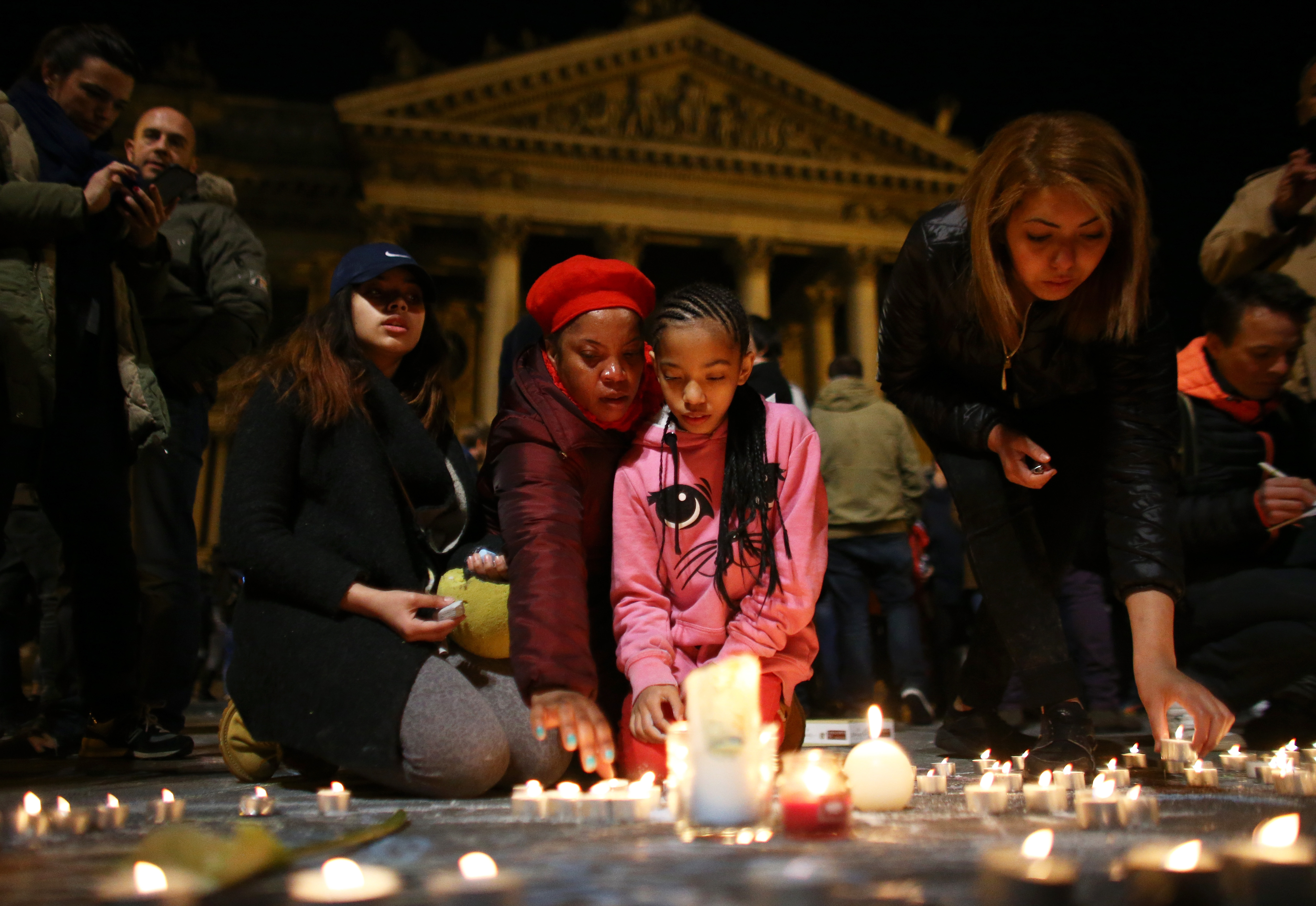 A young girl lights a candle at the Place de la Bourse following the attacks on March 22, 2016 in Brussels, Belgium.
Carl Court—Getty Images 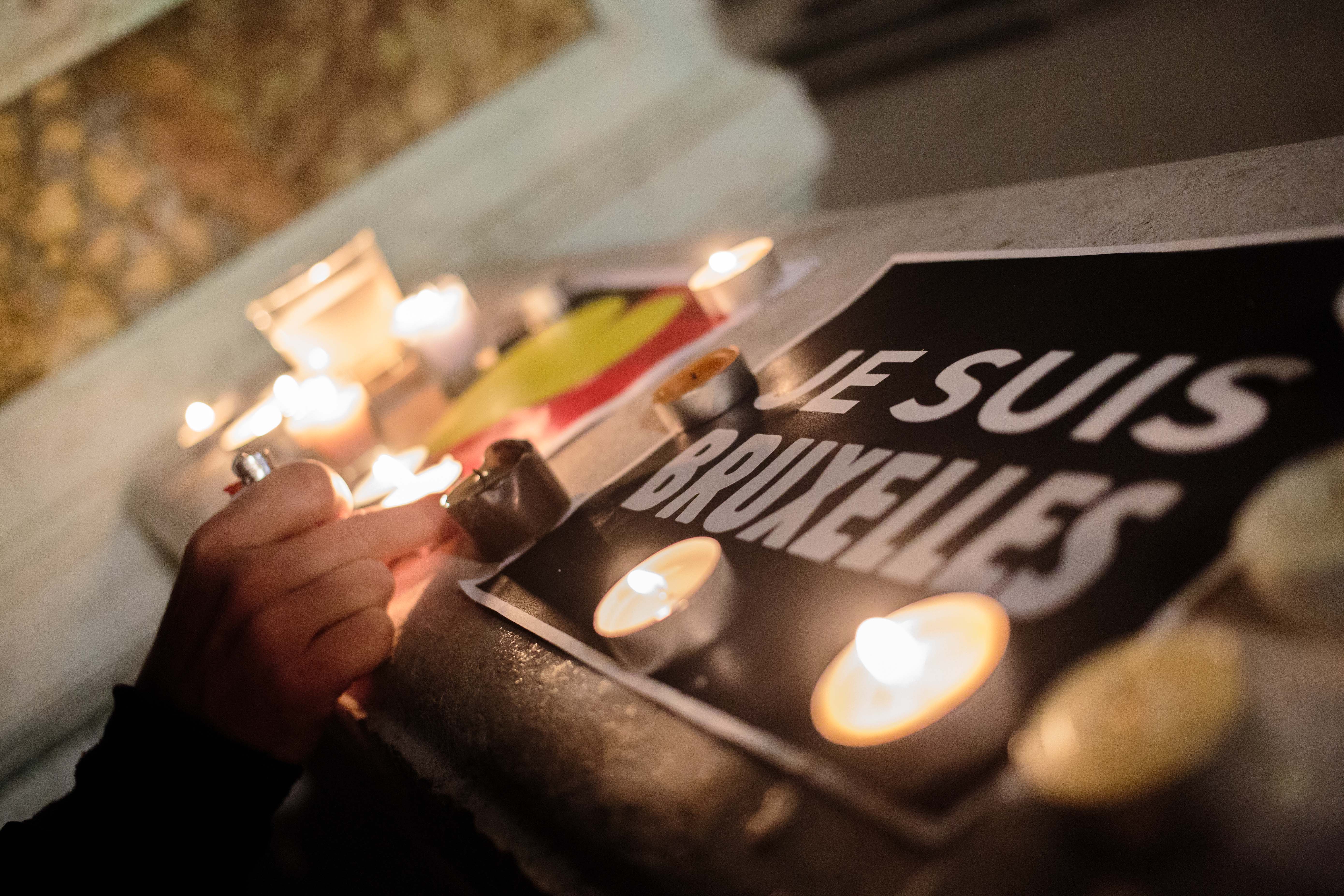 People gather in front of the Hotel de Ville to pay tribute to the victims of the terrorists attacks in Brussels, Belgium on March 22, 2016.
Nicolas Kovarik—Getty Images 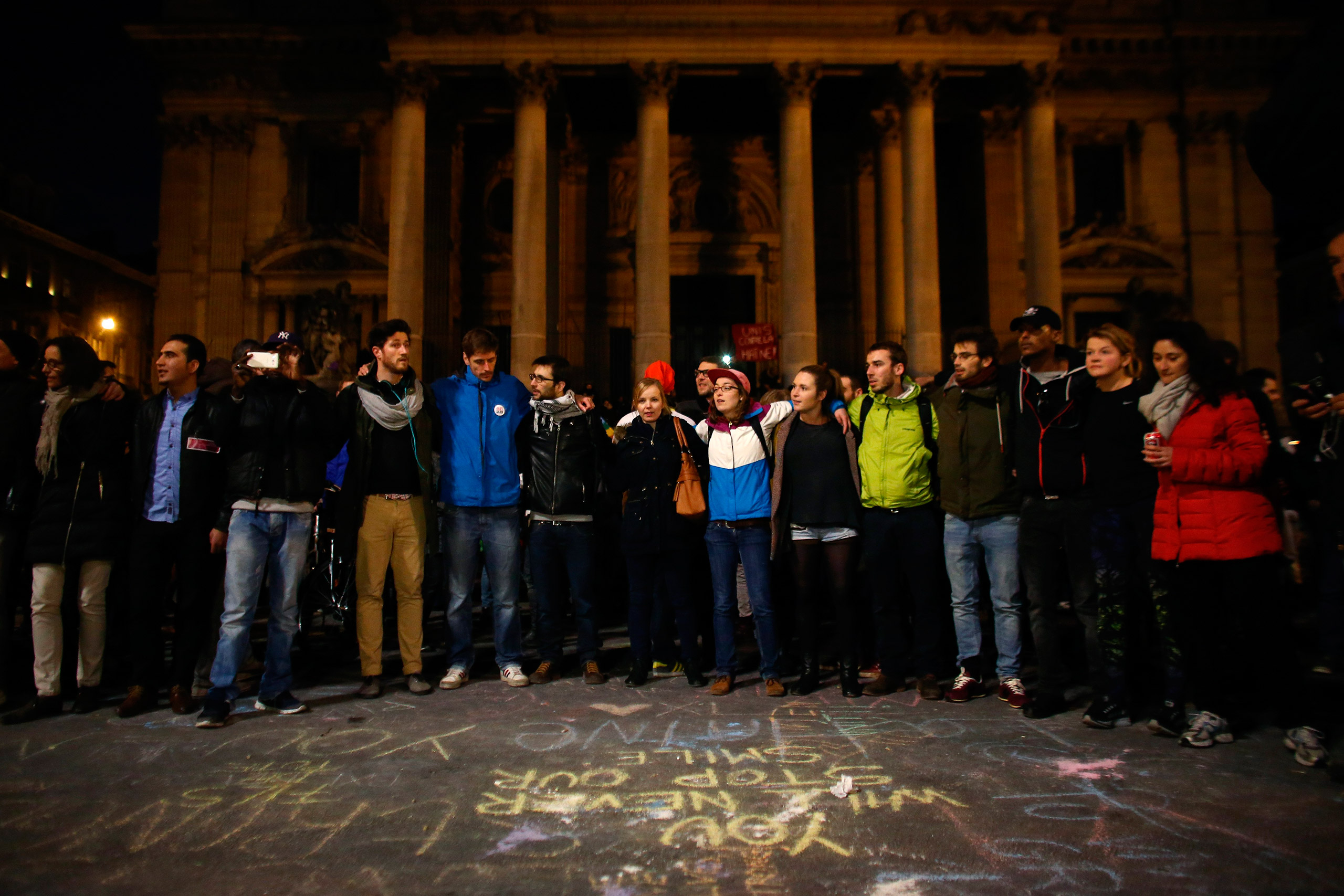 People gather to sing songs as a mark of solidarity at the Place de la Bourse in Brussels, Belgium, March 22, 2016.
Carl Court—Getty Images 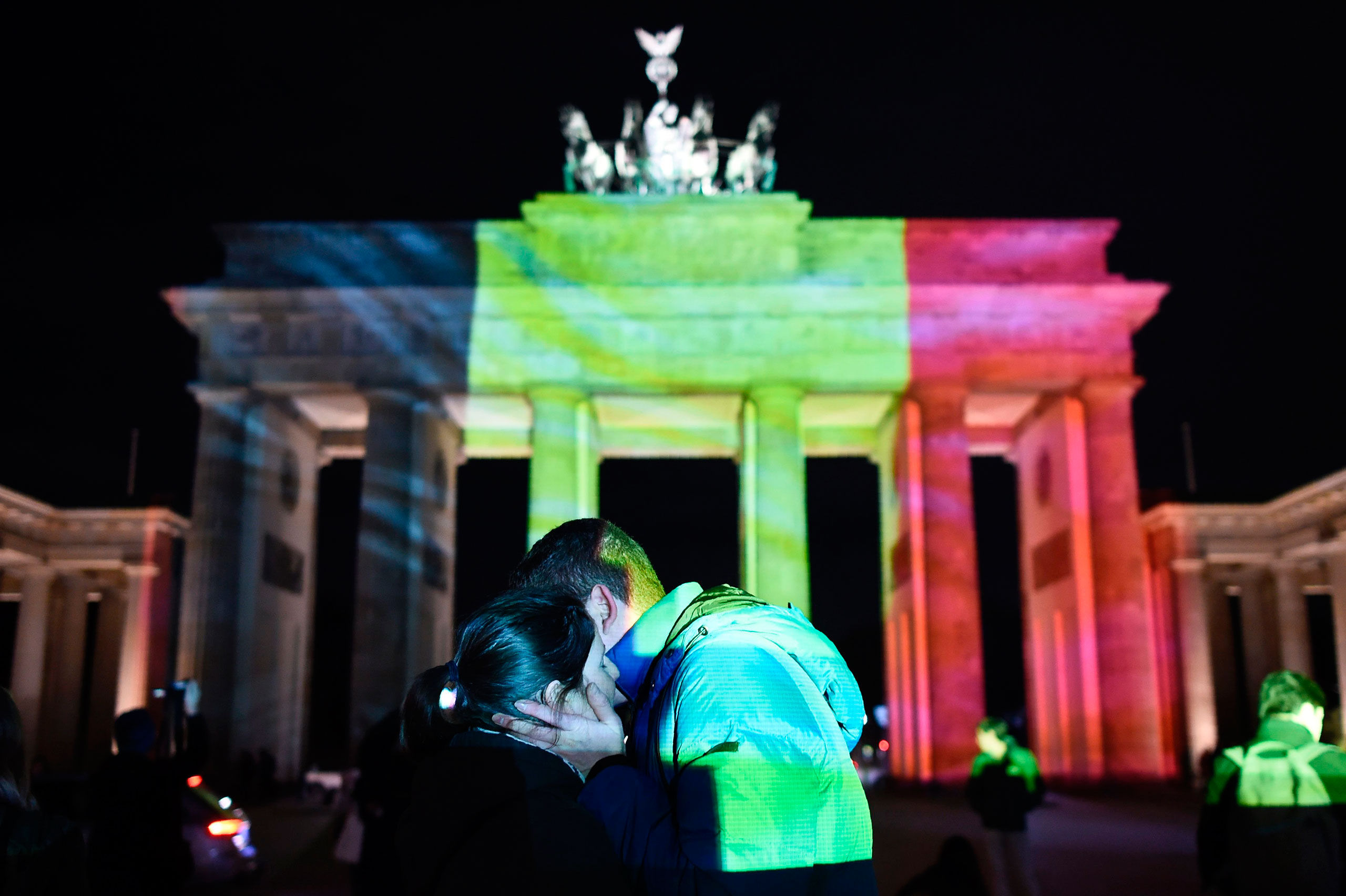 A couple embraces as the colors of the Belgian flag are projected on to the Brandenburg Gate in Berlin, March 22, 2016.
Odd Andersen—AFP/Getty Images
1 of 11
Advertisement

The extremist group Islamic State of Iraq and Greater Syria (ISIS) has claimed responsibility for the attacks.