Review: Superheroes Duke It Out Superseriously in Batman v Superman

As superhero spectacles go, Zack Snyder’s Batman v Superman: Dawn of Justice is a grand one, with a mondo-operatic climax and a final shot infused with quivering, exhilarating molecules of grace. It’s also not much fun: Barely a minute goes by when there isn’t a character or real-life talking head (Charlie Rose and Neil deGrasse Tyson both make cameos) showing up with some droning pronouncement about how humans today, savvy and mistrustful as we are, still need to believe in gods and heroes. The picture is thick with allusions to “aliens” as enemies of the people, dangerous forces that will only come back stronger when we try to vanquish them. At one point a villain with some crazy ideas intones, “God is tribal. God takes sides.” All of these statements are intended to provoke thought, of the political or spiritual kind, but they’re simultaneously too unshaped and too obvious. Snyder floats them onscreen like ominous nighttime clouds, onto which we can project our own Batsignals of meaning.

Why, oh why, can’t we just get what we came for? That is, a good, meat-and-potatoes showdown between a brooding vigilante in a pointy-eared mask (Ben Affleck’s Batman, a.k.a. asocial rich guy Bruce Wayne) and a simpler, sunnier protector of humankind (Henry Cavill’s Superman, who, when he’s not in tights, struts around in criminally sexy horn-rimmed glasses as reporter Clark Kent). Batman v Superman lunges for greatness instead of building toward it: It’s so topheavy with false portent that it buckles under its own weight. Snyder, the man behind the Thermopylae phantasm 300, as well as the flawed but raggedly affecting riot-grrrl head trip Sucker Punch, is an ambitious visual stylist. And there are more than a few dazzling sequences in Batman v Superman, including an apocalyptic dream battle in which spindly, winged terrors, imported straight from a Guillermo del Toro nightmare, buzz menacingly in the margins, while poor Batman gets the batstuffing kicked out of him in the foreground. Incidentally, the brutality of Batman v Superman is the heavy-duty, bone-crunching sort, a factor you might want to consider if you’re thinking of taking very small kids.

But then, fun isn’t what we’re after when we venture out of the fairly jaunty Marvel Universe and into the relatively irony-free DC Comics one: Snyder and screenwriters Chris Terrio and David S. Goyer work overtime to make these superheroes superserious, further embroidering all the basic psychological motivations and hangups their creators — Batman’s Bob Kane and Bill Finger, and Superman’s Jerry Siegel and Joe Shuster — gave them in the first place. Both carry scars of childhood trauma, and both are social misfits: Bruce Wayne/Batman is too self-absorbed to fit in, while Clark Kent/Superman is a literal alien, an outsider perpetually looking into the world of humans but unable to fully join it. They certainly have a lot to talk about — and to fight about.

But the enmity between these two never jells as it should. Batman v Superman traces the source of the duo’s disquiet to the collateral damage Superman inflicted while saving Metropolis from General Zod’s giant, three-toed metal spacekiller (as seen in Snyder’s 2013 Man of Steel). Bruce Wayne watches, glowering, as Superman zips through the sky, saving most of the city’s people but inadvertently causing harm with some errant eyefry. A U.S. Senator from Kentucky (Holly Hunter’s Jane Finch) also worries that Superman might have too much power, and enters an ill-advised alliance with Superman’s arch enemy Lex Luthor (Jesse Eisenberg), who is actually Lex Luthor Jr., LexCorp heir and all-out nutter.

In a picture that’s constantly in danger of being ground down by its own gloom, the brittle lightness of Eisenberg’s high-strung savant is a relief. His sentences unspool like wiry puzzles; in need of Ritalin, he speaks in riddles. The stunning and aristocratic Gal Gadot shows up, all too briefly, as Diana Prince/Wonderwoman: It’s a delight to watch her laugh in the face of danger, which is exactly the opposite of the demands placed on poor Cavill and Affleck. Mostly, they’re called upon to act with their jaws, both of which are, at least, quite magnificent.

But a good jaw will get you only so far. Affleck, sporting just a frizzle of gray at sideburn level, brings some satisfying gravity to his performance. Even so, both Batman and Bruce Wayne mostly come off as sullen brats, jealous of Superman’s glowing skin and saviorlike demeanor. Meanwhile, Cavill just looks noble and pained. He’s best in a scene with Amy Adams, as his amour Lois Lane: She’s just come home from a particularly rough assignment — one whose effects will boomerang against her boyfriend — and finally has the chance to sink into a hot bath. Cavill’s Clark Kent interrupts her solitude, barging in with a sack of groceries (he’s going to make dinner, he announces) and a bouquet of flowers. He hands the troubled Lois a random tulip, and when that fails to cheer to her up, he steps into the water himself, fully clothed. We don’t see what happens next, because we don’t have to. For once, Clark Kent is having some fun. Someone has to be. 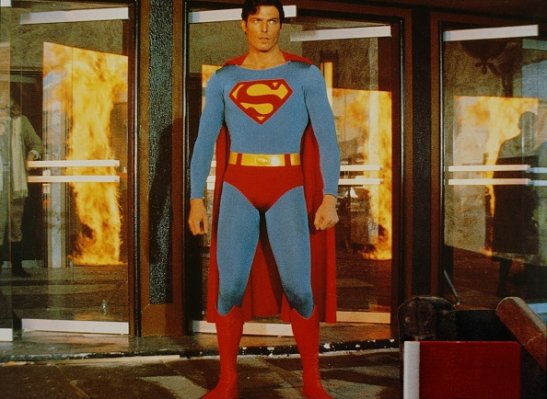 The Honest Trailers for Superman and Batman Show How Much Superhero Movies Have Changed
Next Up: Editor's Pick