How to Help Victims of the Brussels Attacks

As reeling Brussels residents recover from Tuesday’s terrorist attacks on the Belgian capital, many in the city and around the world have organized ways for well-wishers to help.

Three coordinated explosions carried out at an airport and a subway station in the city killed at least 34 people and wounded nearly 200 others. The bombings, which ISIS has claimed responsibility for, prompted Belgium to raise its terror alert to the highest level, close the airport into Wednesday and lock down the city, the Associated Press reported.

Here’s how you can help:

Donate on GoFundMe
GoFundMe has launched a donation page to raise $100,000 for the victims and their families. The crowdfunding platform said it contributed $25,000 to the cause and pledged to transfer all the funds to an official charity for the victims once one is created. “The GoFundMe giving community of more than 20 million people has always been quick to leap into action when tragedy strikes in America, or around the world,” the company said in its description. “We’re already receiving inquiries from our community about what they can do to help the victims of the horrendous terrorist attacks that took place in Brussels this morning.” The page has collected at least $26,000 as of Tuesday evening.

Donate to the Belgian Red Cross
The Belgian Red Cross is seeking donations after deploying more than 100 rescue workers to the crime scenes Tuesday. The organization said on its website that it has a sufficient number of volunteers and blood donors but could use donations to fund equipment. Three shuttle vehicles with blood bags were sent to Brussels hospitals where “the urgent hospital demand is currently met.” “Many donors have responded positively to the call, thank you for your engagement!” it said. Donations can be made here.

Use the #ikwilhelpen hashtag
Many Brussels residents have used the hashtag #ikwilhelpen, which means “I want to help” in Dutch, on social media to offer temporarily housing and transportation to those stranded by the bombings.

Offer Free Car Rides
Drivers with free seats in their vehicles can use the Twitter account @BrusselsLift to coordinate lifts.

The account is powered by a group of digital designers who sort through different hashtags that are being widely used to connect volunteers with those who need rides, according to the New York Times. 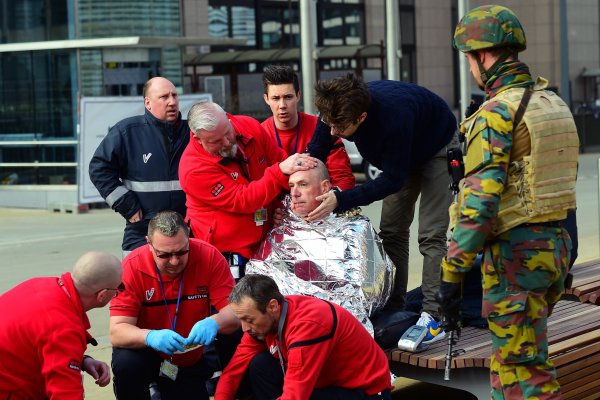 Why Europe Is Ground Zero for Terrorism
Next Up: Editor's Pick