These 5 Facts Explain Why Europe Is Ground Zero for Terrorism

A victim receives first aid by rescuers, on March 22, 2016, near Maelbeek metro station in Brussels, after a blast at this station near the E.U. institutions caused deaths and injuries
Emmanuel Dunand—AFP/Getty Images
By Ian Bremmer

Tuesday’s bombings in Brussels mark the third large-scale terrorist attack in Europe in the past 15 months. These five facts explain why Europe has become ground zero for Islamic terrorism.

1. Setting the Stage
The current cycle of violence started in Brussels in May 2014, when a French fighter linked to the Islamic State of Iraq and Greater Syria (ISIS) opened fire at the Jewish Museum in Brussels and gunned down three people. This was followed by the Charlie Hebdo shootings in Paris, an attack on a free-speech forum in Denmark, the Paris attacks at the Bataclan and the Stade de France and finally, today, the bombings in Brussels.

Across Europe, more than 185 people have been killed, but the population of more than 500 million people in the E.U. has been terrorized. While ISIS claimed direct responsibility for today’s bombings in Brussels, many of the previous attacks are believed to have been “inspired” by ISIS, which makes them no less chilling. All told, ISIS has carried out or inspired roughly 75 terrorist attacks in 20 countries outside Syria and Iraq. ISIS has gone global, shifting from operating purely within its region to a strategy of targeting foreigners abroad. And as it continues to lose ground in the Middle East — it’s lost 22% of its territory in Iraq and Syria since January 2015, and 8% in the past three months alone — the world needs to brace itself for an increasingly desperate jihadist group lashing out at every turn.
(CNN, NBC)

Read More: How Brussels Could Affect the 2016 Election

2. Recruitment Base in Europe
While the venues these terrorists have attacked seem to be relatively random, the cities they’ve targeted are anything but. From 2012 to 2015, more than 400 people left Belgium for ISIS-controlled Iraq and Syria, making Belgium the E.U. capital for foreign jihadist fighters, relative to population. In absolute terms, that title would go to France; over the same time period, nearly 1,200 people have traveled from France to Iraq and Syria to join the jihadist cause.

It’s no coincidence that these two countries are such breeding grounds for Islamic terrorism. Both are home to some of the most radicalized and ostracized Muslim neighborhoods on the continent; Molenbeek in Brussels, and the banlieues in Paris. When these foreign fighters return to their home countries — Belgian officials estimate that 117 of those that left for the Middle East from Belgium have returned — they often have networks of friends and accomplices in place to help shelter them from law officials. When Salah Abdeslam, the only survivor of the 10-person terrorist team responsible for the November Paris attacks, was finally arrested last week, he had been hiding in Molenbeek for more than four months.
(CNN, Politico)

3. Europe’s Continuing Refugee Crisis
ISIS has not only found a fertile recruiting ground among some of Europe’s most disillusioned, the group is also taking advantage of the geopolitical situation it helped create in Syria. The single biggest story in Europe over the past 18 months has been the refugee crisis, as millions stream into the continent to flee Middle East wars. In 2015, more than 1.1 million migrants entered Europe; there’s little sign of a slowdown in 2016, with 135,000 people having arrived by sea so far.

In the refugee crisis, ISIS has recognized a golden opportunity to further its narrative of a civilizational war between Islam and the West — and many European leaders have played directly into the terrorist group’s hands. When the Polish and Bulgarian Prime Ministers say that they are only willing to accept Christian refugees, it gives fodder for ISIS to rally more zealots to its cause. One of the Stade de France attackers apparently carried a fake Syrian passport in an effort to further push this narrative. ISIS clearly wants the European public to conflate refugees and terrorists, and it has been doing a disturbingly good job so far.
(Guardian, BBC)

4. Fracturing European Unity
It’s still too early to say how effectively ISIS has used Europe’s response to Muslim refugees as a recruitment tool, but it’s already been quite successful at fracturing Europe’s political unity. German Chancellor Angela Merkel, Europe’s de facto leader, is at her political low point, even after orchestrating a deal with Turkey to continue housing Syrian refugees outside of the European Union. The deal, which hinges on giving Turkish citizens visa-free travel throughout Europe, was already difficult to implement. After today’s attacks, Europeans will be even more skittish about letting another 76 million people from a largely Muslim country travel freely throughout Europe.

The heart of the European project has always been the Schengen Agreement, which provides for the free travel of people, goods and services across 26 European countries. And while certain countries began throwing up walls over the summer to try and stem the flow of refugees, things got much more serious with the Paris attacks in November and the decision by founding E.U. member France to introduce border controls. Suddenly, instituting border controls was seen as not a question of handling migration flows, but of survival. That’s bad news for the most ambitious political project of the past century.
(World Bank, BBC)

Read More: Refugees Could Be the Next Victims of the Brussels Attack

5. Looming Referendums
And that political project has yet to face its greatest test: the U.K.’s referendum on whether to leave the E.U. The specter of a country voluntarily leaving the E.U., especially a country as consequential as Britain, would leave the future of the union in question. Already, 53% of French and more than 45% of Germans, Spaniards and Swedes want to follow Britain’s lead and stage E.U. referendums of their own. Imagine what would happen if there were a terrorist attack in the U.K. before the E.U. referendum. ISIS’s leaders have every incentive to destabilize the continent further and will have plenty of opportunity to do so. This makes Europe a prime target for ISIS going forward.
(Politico) 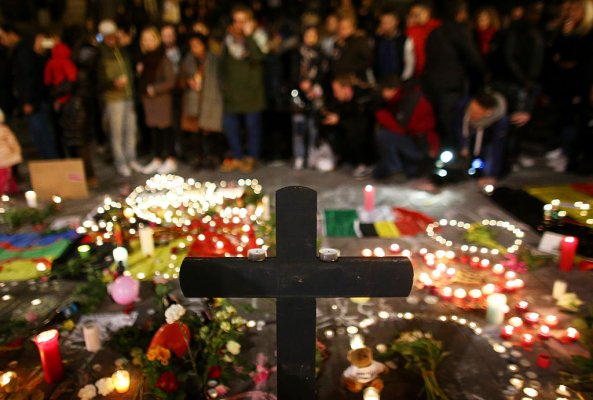