Explaining That Monster at the End of Batman v Superman

Spoilers for Batman v Superman: Dawn of Justice ahead

Batman and Superman may have their differences, but by the end of Dawn of Justice, the two heroes (and even Wonder Woman) are forced to unite against a common enemy: Doomsday.

If you’re not a comic book fan, there’s a chance you didn’t even catch Doomsday’s name. The only allusion to it is when Lex Luthor proclaims to Superman that the monster is “your doomsday” with a lowercase “d.” In the film, Doomsday doesn’t survive the night, but he has a robust presence in the Superman comics. Here’s what you need to know:

Superman is an alien with superhuman powers, which means many of his foes cannot match him and instead rely on technology or tricks to trip up the Man of Steel. Not so for Doomsday, who was created—at least in the comics—on Krypton and equals Superman in strength. In fact, he kills Superman in a storyline dubbed, “The Death of Superman.” (More on that later.)

Doomsday, an unthinking creature, is hellbent on killing everyone and everything in his path. He is a massive blob monster with bones protruding from his body.

MORE Here’s What You Probably Missed in Batman v Superman

He has a different creator in the comics

In Batman v Superman, Lex Luthor creates Doomsday using his own DNA, that of the dead General Zod (an alien from Krypton you may remember as the bad guy from Man of Steel) and Kryptonian technology. But this origin diverges from the comic books.

In the comics, Doomsday was born during prehistoric times on Krypton. An alien scientist named Bertron conducted a series of cruel experiments on a humanoid infant in which it is killed over and over again until it evolved into Doomsday (then known as The Ultimate). Doomsday eventually kills Bertron. He’s nicknamed Doomsday by the media after he comes to earth.

The movie shows Lex Luthor mixing his own blood with that of General Zod to create the monster in the Genesis Chamber of the Kryptonian spaceship that crashed in Man of Steel.

For those who skipped Man of Steel, the Genesis Chamber is used to create beings. By destroying the ship in Man of Steel, Superman (presumably) throws away any chance he had of creating more of his race.

Given the damage to that ship, it’s unclear how Doomsday is created. The Kryptonian science behind General Zod’s transformation goes largely unexplained in Batman v Superman.

In the comic books, Doomsday is created long before General Zod is even born. However, Doomsday does share blood with General Zod in Smallville, the TV show about Superman’s early years.

Before Superman crossed paths with Doomsday, the monster took out several Green Lanterns—superheroes who transfer power through rings—in the comic books.

It will probably come as no surprise to comic book fans that Superman’s fight with Doomsday ends with his “death” at the end of the film. (We can presume from the levitating dirt above his coffin in the final shot that the Man of Steel will return just in time for the Justice League films.) After all, Doomsday is best known as the monster who kills Superman in “The Death of Superman.” The two characters confront each other in front of the Daily Planet building in Superman’s home city of Metropolis and beat each other to death.

After Superman’s death, four super-beings appeared, two of whom claimed to be the real Superman. One of them strapped the apparently lifeless body of Doomsday to an asteroid and flung it into deep space. Doomsday, however, awoke from his slumber and survived (though chained to the asteroid).

He returned to life too because—come on—he’s Superman. Here’s how.

So they faced off again

Superman took on the “resurrected” Doomsday in space. Though he could not defeat the creature, he was able to use a time travel device to leave Doomsday at the End of Time. There, Doomsday was defeated by entropy. (Yes, really.)

Doomsday shows up again in other storylines (thanks to time travel devices), including joining the ranks of the Suicide Squad before slaughtering them all. But don’t expect him to show up in the August Suicide Squad movie. The beast seems dead, at least for now.

Correction: The original version of this story incorrectly described Smallville. It was a TV show about Superman’s early years. 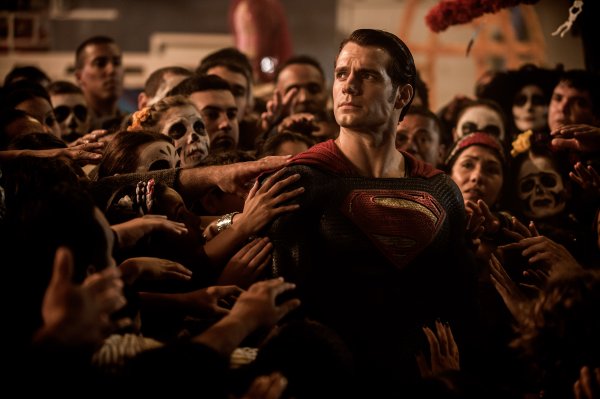 Here’s What You Probably Missed in Batman v Superman
Next Up: Editor's Pick