The Truth About Caitlyn Jenner’s Politics

As a transgender author and activist, I have fielded my fair share of Caitlyn Jenner-related questions. Given the immense publicity surrounding Jenner’s coming out as transgender last year, I am not surprised by all the questions. But what I did not expect was that the most common question concerned her Republican political identity rather than her female gender identity.

As the second season of Jenner’s reality show I Am Cait began its run amidst the backdrop of the 2016 presidential primaries, that curiosity has only increased. In one episode, Jenner claims that Donald Trump, who identifies as pro-life and has made numerous comments widely viewed as sexist, would be “very good for women’s issues,” while she dismisses Hillary Clinton as a “f-cking liar.” (Jenner has since tweeted a conciliatory photo of herself and other cast members posing with the current Democratic frontrunner.) In a recent interview, Jenner has expressed admiration for Ted Cruz and a desire to be his “trans ambassador”—though she acknowledges that he would likely be “one of the worst ones when it comes to trans issues”).

Jenner’s political allegiances have disappointed many in the transgender community. After all, social conservatives (including Cruz himself) repeatedly make misleading and incendiary remarks about transgender people, and in 2016 alone Republican lawmakers in at least 16 states have forwarded anti-trans legislation, such as so-called “bathroom bills” intended to make it either illegal or dangerous for trans people to use public restrooms. Trans people (including many of Jenner’s I Am Cait cast members) have also pointed out that, as a result of systemic discrimination, trans people disproportionately struggle with unemployment and poverty, and that Republican efforts to dismantle social services would have a devastating effect on trans communities.

I have heard some trans people voice concern that, given her high profile status as a trans celebrity, Jenner’s personal political views may be mistaken to be representative of the community’s as a whole. On this point, I strongly disagree. To the contrary, virtually all media accounts (including her own reality show) have portrayed Jenner’s political views as being at odds with the larger trans community.

This got me thinking: If people already presume that transgender people are not (or should not) be Republican, then why bother asking me my thoughts on Jenner’s political stances? To me, these inquiries increasingly feel like an invitation to participate in the public condemnation or delegitimization of Jenner.

I suppose one could make the case that the media’s depiction of Jenner’s political remarks as suspect stems from a sincere concern that transgender communities may be negatively impacted by her views. But I doubt it. Issues that that impact trans communities receive very little media coverage, yet a single trans woman’s political views have garnered all the national attention.

Take, for instance, a recent segment on The View, in which Joy Behar (an outspoken Democrat) quipped in reference to Jenner, “Transgenders for Cruz is like Jews for Hitler.” Behar does not exhibit any substantial understanding of transgender communities—if she did, she would have known that most trans people object to the word “transgenders” (transgender is an adjective, not a noun). Internet searches using Behar’s name along with phrases like “bathroom bill” or “anti-trans legislation” retrieve no relevant results. Has Behar used her national platform to discuss political issues that directly impact transgender communities? Doesn’t seem like it. Yet despite her apparent disinterest in transgender politics, she feels entitled to accuse Jenner of essentially being a transgender turncoat—with a Hitler reference, no less!

While my political views are far closer to Behar’s than to Jenner’s, I find it incredibly patronizing that Behar and other liberals would presume to know what is best for trans people, or insinuate that we should be single-issue voters who vote for Democrats simply because Republicans are more overtly hostile to us.

Trans people are different from one another in every possible way, and that includes politics. While most U.S. trans people are likely Democrats, there are Republicans. Others identify outside of the two-party system: as communists, or anarchists, or libertarians, and yes, even social conservatives.

I am registered Green, although I will likely end up voting for the Democratic nominee for president—but not because I believe that the Democratic party is righteous or unfailing on transgender issues. For most of my 48 years, both party stances on trans people were equally abysmal. As recently as 2007, Congressman Barney Frank was pushing to drop transgender people from the Employment Non-Discrimination Act—a move that he still does not regret.

President Obama has taken some significant positive steps, such as publicly coming out against gender conversion therapies and proposing a rule that would ban insurance companies from discriminating against trans people (although it would not require them to cover medical transition). Some of Obama’s other highly celebrated moments—such as hiring a transgender White House staff member, or saying the word “transgender” during his 2015 State of the Union speech—were signs of progress, but they also represent a fairly low bar.

Despite Democrats’ slow and tentative recognition of transgender people, I will likely vote for their nominee for president because (like most trans people) I am not a single-issue voter, and I prefer their views on environmental, economic and social justice issues over Republicans’.

If Caitlyn Jenner votes Republican this election, she will also be basing her decision on numerous positions outside of transgender politics. In most cases, I will strongly disagree with those positions. But I will also disagree with the positions of millions of other Republican voters, the vast majority of whom are not transgender. So it’s unclear to me why I should single Jenner out for derision.

I recently had a conversation with an acquaintance whom I don’t know very well, but he knows that I’m a transgender activist, and he brought up the subject of how Caitlyn Jenner has upset the trans community via her political remarks. He was practically giddy over the negative reactions to her missteps. Of course, Jenner is a reality TV star, and people seem to enjoy watching reality TV stars being publicly humiliated—normally that’s how I might have interpreted his reaction.

However, throughout the conversation, this acquaintance kept referring to Jenner as “he,” despite my attempts to correct him. He did not seem to take Jenner’s female gender identity seriously. And I couldn’t help but wonder whether some of his fascination—and that of other people—stems from anti-trans bias, conscious or not. After all, many Americans still see transgender people as strange or illegitimate. So it wouldn’t surprise me if interest in this story is partly driven by a desire to see the world’s most famous transgender person being taken down by her own community.

Caitlyn Jenner has positioned herself as a representative or “ambassador” of trans communities, so I can understand why trans people object or take issue when her views fail to accurately reflect or support those communities. But when people who are unconcerned with transgender rights themselves start piling on, quite frankly, I am suspicious. 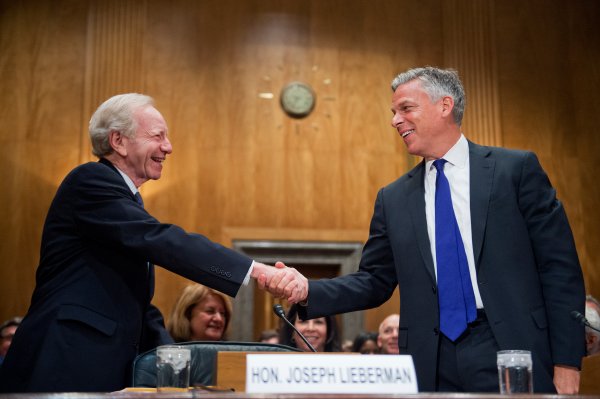 The Republican SCOTUS Blockade Is 'Not Acceptable'
Next Up: Editor's Pick