Here's What 'iPhone SE' Stands For

Leading up to Monday’s Apple event, the normal hype and hysteria that accompanies the tech-giant’s special events was all but missing.

The rumor mill had spent months covering and churning out every detail of the event, and as has been the case as of late, Mark Gurman’s reporting was once again spot on.

As promised, Apple announced a 4-inch iPhone SE, identical in looks to the iPhone 5S with upgraded internals. A smaller iPad Pro also made its debut, complete with Apple Pencil support. And, of course, Apple released new colors of existing Apple Watch bands and an entirely new line out of nylon.

The announcements surprised no one at the event.

Instead, the surprise arrived when I visited the demo room set up across the hall. As I picked up the iPhone SE for the first time, ready to scoff at its lack a fresh design, I was instantly taken back to 2013 when the iPhone 5S was announced.

Nostalgia aside, the revelation was that Apple’s release of a modernized 4-inch iPhone is about more than just finding success in emerging markets. It’s about lowering the entry cost to Apple’s ecosystem.

Apple’s iPhone lineup once carried a $650 premium for entry. But now with a starting price of $399, the iPhone SE means Apple customers no longer have to sacrifice performance for price by buying an already obsolete device. At last, parents have an inexpensive option that has just as much oomph for their Snapchat obsessed teens (or those who’ve yet to get a smartphone at all, which is admittedly a dwindling number). And the entry-level iPhone comes at a price that directly competes with Android smartphones from the likes of Google and Motorola.

But that’s just in the pocketbook. In the hand, the iPhone SE is everything we—okay, I—loved about the iPhone 5S, only it’s just as fast and powerful as the more expensive iPhone 6S I now carry daily. It puts the same camera, performance, and reliability of Apple’s most cutting-edge products into a new form factor with old familiarity.

Similarly, Apple’s 9.7-inch iPad Pro looked identical to the 12.9-inch iPad Pro the company released last year, only smaller. The addition of Apple Pencil support and a dedicated keyboard add more to the iPad line than a simple processor upgrade or minor cosmetic changes (as has been the case with the last few models). And as result, for the first time in years, Apple has given consumers a real reason to upgrade from their older, yet still fully capable iPads.

While reception to the new iPad Pro may have been cool at the event and online, anyone looking to upgrade should have that familiar, pulse-quickening feeling of Apple-related anticipation. It’s the kind of flutter that once filled Apple’s Town Hall amphitheater.

And as Apple CEO Tim Cook ended the event, the announcement took a sentimental turn, when he revealed that this was likely the last product announcement the company will make on this stage; the same place where Steve Jobs announced the iPod. This is the hallowed ground where the App Store was launched—not to mention the 1.5 million apps that sprang from it. And five years ago, the iPhone 4S was launched here, the day before Jobs died.

From this spot, Apple moves forward. Next year, the company’s new campus will open, complete with a theater that is much bigger than Apple’s current venue. That’s where the company will likely make its future product announcements.

Jobs was never a fan of spending too much time thinking at the past, as noted in his own words just outside the Town Hall’s entrance: “If you do something and it turns out pretty good, then you should go and do something else wonderful, not dwell on it for too long. Just figure out what’s next,” the quote reads.

But maybe it’s okay to dwell, ever so briefly at times. Perhaps dwelling can help ease the inevitable fear of change; the fear that surely comes with leaving the halls Jobs once roamed, for a place where his presence will only be felt in words and photos.

I was able to grab two-seconds of Phil Schiller’s attention on the demo floor. In that time, I asked him perhaps the most important question of the day: What does “SE” stand for? “Special Edition,” he told me. For him, the name pays homage to the Macintosh SE; a computer the company released in 1987.

With the iPhone SE being a tribute to the past in more than one way, the only question that’s left for Apple is: What’s next? 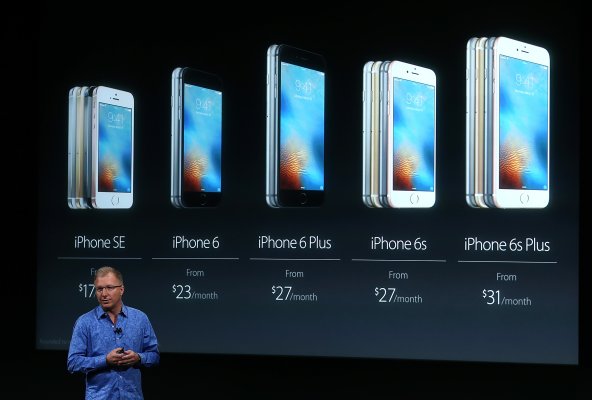 Here's Everything Apple Just Announced
Next Up: Editor's Pick