Republican presidential candidate Donald Trump addresses the annual policy conference of the American Israel Public Affairs Committee (AIPAC) in Washington, D.C., on March 21, 2016.
Alex Wong—Getty Images
Ideas
By Rabbi David Wolpe
Wolpe is the Max Webb Senior Rabbi of Sinai Temple in Los Angeles, the author of eight books and has been named one of the 50 most influential Jews in the world by the Jerusalem Post.

Crowds rarely have integrity. For all the reservations people expressed about Donald Trump before he arrived to speak at the American Israel Public Affairs Committee’s annual policy conference—the misogynistic posturing, the crudeness of public statements about various groups, the vacuity of his public pronouncements on policy—all it took was a few assurances about Israel to have people on their feet. Not that the crowd should have been rude. To treat a guest politely is appropriate.

The much-publicized Rabbi walkout was a mistake—you do not invite someone to your house and then turn your back on them. But the deeper question is how does one behave when a candidate says, “I’m not here to pander” as Trump did, before saying everything he knows the crowd wishes to hear? Manners do not mandate agreement. Applause, like tipping, is not an obligation but a gratuity.

As I sat and kept my hands still, I did warm to the content of certain things Trump said. But a political message is not a mathematical formula, independent of the one who declares its validity. Political messages are tied to the messenger. Sitting in the vast auditorium and speaking to people afterwards, three observations occurred about the nature and content of Trump’s talk.

1. He didn’t speak off the cuff. He read from a Teleprompter, a device he has mocked other politicians for using, even saying that one who runs for President shouldn’t be allowed to use them. The prompter served him well, however. As a result of that and some preparation, his address had far more content than previous talks. He spoke cogently about Hamas and Hezbollah, about the threat of Iran and the Israel-America relationship. The speech did not approach the level of foreign policy sophistication of Hillary Clinton’s talk in the morning, but certainly surprised those who believed it would be a trail of smoke and bluster. That he is able to absorb and communicate policy particulars is clear.

2. When he did improvise, he wandered into the thicket of self-reverence. His claim to have studied the Iran deal “in more detail than anyone else” was met with a smattering of derisive laughter. He doubled down, insisting that he had, thereby shocking experts in Israel, America and elsewhere, as well as academics and others sitting in the hall, a number of whom have devoted their lives to nuclear studies or Iranian studies or both. His boast about being the Grand Marshal for an Israeli Day parade did not strike the people I spoke with as a serious credential. The election isn’t for prom king.

3. He didn’t address many important issues. Trump’s speech did not address anything beyond the confines of the Israel-American relationship. The larger questions of the Middle East, or immigration in the U.S. or Europe, were left mostly untouched. In that sense this was a careful speech. The Jewish philosopher Hermann Cohen said that in the idea of the stranger Judaism was born. Indeed before he spoke there was a presentation of what Israel has done to help Syrian refugees. Trump was speaking to a crowd sensitive to the idea of the stranger, the dispossessed, those desperate for hope. Evading the issue was a wise strategy. A retread of xenophobia would have ruined the effect.

Walking back to the hotel afterwards I asked one young woman what she thought. “Well, it was exciting and that’s all that matters,” she said. Yes, it is all that matters if your goal is to be entertained. But a voter is not a fan, and a candidate is not a celebrity. The stakes are as high as they could be. Neither resentment nor enchantment are adequate to decide—there has to be thought, testing, understanding.

I left the conference thinking about the words of Rabban Gamliel two thousand years ago. He declared that no one should be admitted to the house of study whose inside is not like his outside. I wondered who among the candidates would have passed the Rabbi’s exacting test. And who, clearly, would not. 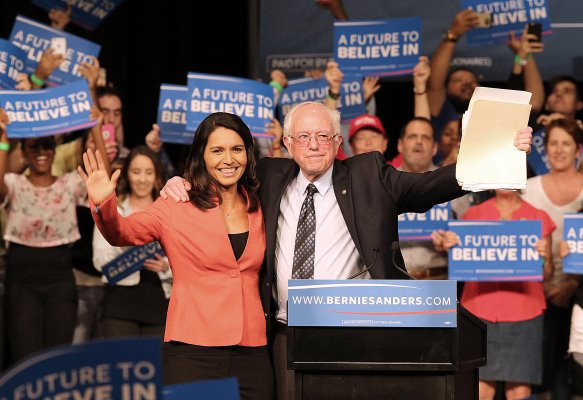 Bernie Sanders Is the Commander in Chief We Need
Next Up: Editor's Pick