How the Brussels Attacks Could Affect the 2016 Election

Ted Cruz speaks to the media about events in Brussels, on Washington, on March 22, 2016.
Jacquelyn Martin—AP
By Philip Elliott

The fault lines among the 2016 White House hopefuls came into clear view Tuesday morning, as their responses to the terror attacks in Brussels varied from Ted Cruz calling on the United States to “utilize the full force and fury of the United States” to fight radical Islam, to Hillary Clinton calling on revised policies for visas.

Republican frontrunner Donald Trump, who just a day earlier called for a more limited role in the Brussels-based NATO, found himself taking criticism from all sides. Yet it wasn’t clear if his latest unfortunately timed foreign policy statement would have an effect on this campaign, or if the criticism would only encourage his fervent supporters to defend him against rivals.

In a campaign where foreign affairs often plays a secondary role to the domestic angst and anxiety, the developments in the European Union’s capital were unlikely to upend the American election. Yet they were a reminder that the presidential campaign at home is also a two-year interview for voters to pick the next U.S. Commander in Chief. And each candidate worked to give their supporters what they wanted: anti-Islamic extremist rhetoric from one end of the spectrum, to policy-oriented solutions at the other.

Belgian media were reporting at least 34 dead and more than 170 injured, a number likely to climb as the day goes forward and officials have a chance to inspect what appeared to be at least three coordinated attacks. No claims of responsibility were immediately made, but it was clear the act of terror would shift the talk in American politics away from the characters looking for votes and toward the threats facing the United States, at least for a little while.

Donald Trump, the Republican frontrunner, took to Twitter, his favorite platform for instant and unfiltered analysis. “Do you all remember how beautiful and safe a place Brussels was. Not anymore, it is from a different world! U.S. must be vigilant and smart!” The attacks, if they are confirmed to have been committed by Islamic extremists, will only bolster his proposal to halt the immigration of all Muslims into the United States—and perhaps cement his role as the GOP leader.

Phoning in to NBC’s Today Show, Democratic frontrunner Hillary Clinton said the United States must intensify its efforts to keep Americans safe. “We’ve got to tighten our security. I’ve talked about our visa system. … It’s unrealistic to simply say that we are going to completely shutdown our borders,” she said in a phone interview.

It’s also possible the attacks will be another blip in the ongoing presidential race.

After all, they are hardly the first attacks to come in the midst of this White House race. A November attack in Paris left at least 130 dead, and a month later, extremists left 14 dead in California. Each time, the candidates laid out broad plans to defeat America’s enemies. And then the campaign shifted back to talk about Donald Trump’s hand size, questions about Trump’s business ventures and Hillary Clinton’s emails.

But Tuesday’s attack, coming before many Americans were set to head to airports and train stations for schools’ spring breaks, would leave a cloud of uneasiness over travelers. At the same time, the race was heading into one last throe for Republican critics of Trump to cast him as unfit to lead America’s foreign policy. After Utah and Arizona Republicans vote Tuesday, another 19 states have yet to weigh-in, and Trump’s critics were looking to derail his assured nomination before the Republican Establishment arrives in Cleveland for its summer convention.

Cruz used the opportunity to criticize Trump for his suggestion that the United States should scale back its financial role in NATO.

“Frankly, they have to put up more money,” Trump told CNN’s Wolf Blitzer about Europeans’ share of the NATO bills. “We are paying disproportionately. It’s too much, and frankly it’s a different world than it was when we originally conceived of the idea.”

NATO, of course, is based in Brussels. And the attacks gave Cruz an opening. “Withdrawing from NATO as Donald Trump suggests is preemptive surrender,” Cruz said a few blocks from Washington’s Union Station.

Clinton, too, added her voice in questioning Trump. Although she is still in a primary fight with Democratic rival Bernie Sanders, so much of her campaign now is focused on Trump. “This is time to reaffirm our commitment to our allies individually and through NATO,” she said during one of her calls to broadcast networks.

Ohio Gov. John Kasich, who faces almost an impossible mathematical path to his Republican Party’s nomination, also criticized Trump’s NATO comments. “We must strengthen our alliances to root out evil. Not dismantle them,” he tweeted.

“We have to develop a better count-intelligence to disrupt these things,” Kasich told MSNBC, urging restraint in criticizing Islamic extremism. “Everyone who is a Muslim is not connected. … We do not want to label and entire religion as at war against the West.”

The pile-on against Trump has been tried before, with little impact. The brash billionaire has climbed to the top of the GOP field on his promises to upend the political system. At his rallies, he says he would re-negotiate American deals, spend less money and get better outcomes. It’s vague, sure. But his statements on NATO fall into that mold, and so far, he has not paid a price. 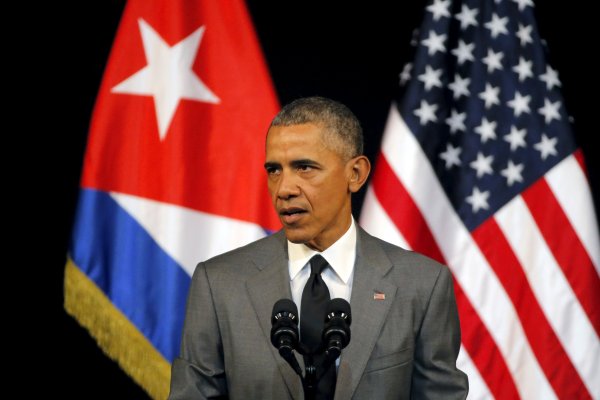 Obama on Belgium Attacks: 'The World Must Unite'
Next Up: Editor's Pick