Hundreds of travelers were stranded amid the chaos following attacks at Zaventem Airport and the subway in Brussels on Tuesday morning.

All transportation came to a standstill in Brussels, as the international airport suspended all operations, canceling flights to and from the city. The Brussels Airport CEO said the airport would remain closed through Wednesday, the Associated Press reported.

A United Airlines flight from Newark was rerouted to an undisclosed location on Tuesday, NBC News reported. And a Delta flight with 144 passengers traveling from New York to Brussels was diverted to Amsterdam.

“Delta will be actively working with customers with flights booked to, from or through Brussels to reaccommodate their travel plans,” the airline said in a statement.

Bus, tram and subway transportation was also shut down in Brussels, and Uber reported that its service in the city had been affected.

“Demand is high, surge pricing is off, drivers are busy,” Uber Brussels posted on Twitter. “Be safe and thanks for your patience.”

Eurostar canceled trains connecting Brussels with Paris and London, the Times reported. Thalys—which runs high-speed trains linking dozens of cities in Belgium, France, Germany and the Netherlands—also suspended service, according to the newspaper.

While service at airports and metro systems in the U.S. was not directly affected, many boosted security in response to the attacks. 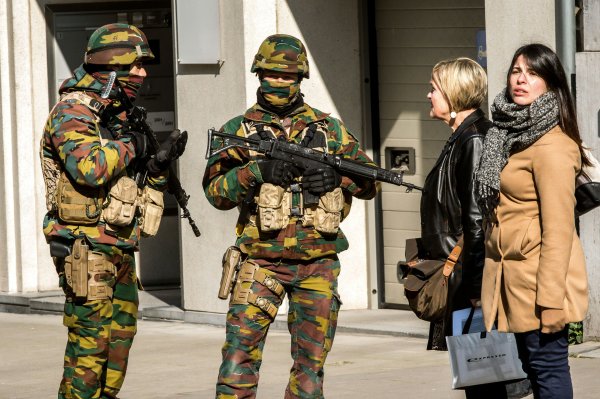 Brussels Residents Use Hashtag #ikwilhelpen to Offer Help to Those Stranded
Next Up: Editor's Pick