What to Know Before You See Batman v Superman: Dawn of Justice

Batman v Superman: Dawn of Justice is shaping up to be the biggest movie of 2016 so far. Director Zack Snyder’s pairing of the Dark Knight and the Man of Steel, due out March 25, promises to be instant box office gratification while whetting fans’ appetites for upcoming DC superhero flicks like Wonder Woman and Justice League. Here’s everything to know before you watch—save for what actually happens in the movie.

It’s a follow-up to 2013’s Man of Steel. Snyder directed Henry Cavill in the Superman origin story, many of whose stars—Amy Adams, Diane Lane, Kevin Costner, Laurence Fishburne—reprise their roles in Batman v Superman. The new flick begins where that one left off, so those who have seen Man of Steel will be best equipped to follow the action from the get-go, though it’s not an absolute prerequisite.

It’s long. Hit the bathroom and stock up on Red Vines before taking your seat, because Batman v Superman rings in at two hours and thirty-one minutes. And for those who can’t get enough, a three-hour, R-rated cut will be available on DVD and Blu-ray after the movie’s theatrical release.

This is not the first time the superheroes have faced off. Batman and Superman have, in fact, battled several times in comic books and on television, though this will be their first major big-screen showdown. Speculation as to who might emerge victorious tends to favor Superman, but a look back at previous match-ups shows that Batman may have a fighting chance.

Wonder Woman makes her big-screen debut. Forget about the men; Batman v Superman is all about the superheroine whose name is absent from its title. Israeli actor (and former combat trainer and pageant winner) Gal Gadot brings the Amazonian princess to life, setting the stage for her feature-length debut, Wonder Woman, due out in June 2017.

The Joker and the Riddler almost made appearances. Jesse Eisenberg’s Lex Luthor is Batman v Superman’s main villain, but he was almost joined by two foes from the Dark Knight’s past. Snyder explained to Collider that while their “mythological presence is felt,” they ended up on the cutting room floor because he “really needed to spend the time, frankly, with Batman and Superman to understand the conflict.”

It’s setting up a slate of movies exploring the DC Extended Universe. Marvel has made a killing with its cinematic universe—both The Avengers and Avengers: Age of Ultron are in the top ten highest-grossing movies of all time—and now DC is following suit. Batman v Superman sets the stage for Wonder Woman (2017), Justice League Part One (2017) and Justice League Part Two (2019). Other related movies to be released include Suicide Squad (2016), The Flash (2018) and Aquaman (2018).

It’s shaping up to slay the box office. Box office analysts put Batman v Superman’s opening weekend at $150 million in North America (where it will play in 4,000 theaters), but note that that estimate may even prove low. It will also get a major boost from a simultaneous opening in China. The Avengers still holds the opening weekend record for a superhero movie, with $207 million domestically in 2012.

Ben Affleck was cast as Batman because Snyder wanted a “world-weary” Dark Knight. The casting of Ben Affleck as a successor to Christian Bale’s Batman surprised many, but Snyder has explained why the Oscar-winning Argo director perfectly fit the bill. “I wanted a world weary Batman… someone who has had experiences, and Ben has really hit that,” he said. He also wanted a tall Batman, and Affleck, at 6’4” (6’6” in boots) satisfied that requirement, as well.

The score is all new. Hans Zimmer, who also scored Christopher Nolan’s Dark Knight trilogy, returns for Batman v Superman, though he vowed not to reuse any of the themes composed for those movies. Zimmer collaborated with composer Junkie XL on both the Batman and Superman themes for the score.

Affleck is the 11th actor to play Batman, Cavill is (give or take) the 17th Superman. Both superheroes have been portrayed so many times it’s easy to lose count—not to mention that counts vary depending on whether you include commercials, shorts and other depictions not strictly done for TV shows and films. Affleck joins a brotherhood that includes Adam West, Michael Keaton and George Clooney while Cavill finds himself in the company of Kirk Alyn, George Reeves and Christopher Reeve. 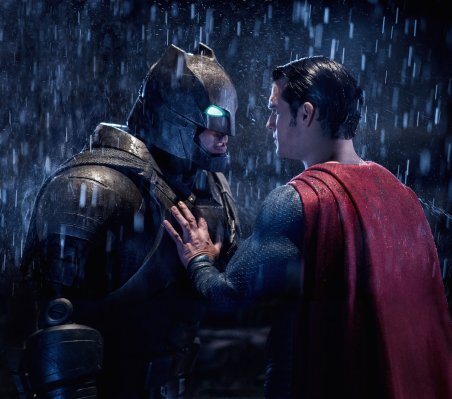 Review: Superheroes Duke It Out Superseriously in Batman v Superman
Next Up: Editor's Pick