World leaders and senior figures expressed compassion and concern to the attacks in Brussels that killed at least 31 people and injured dozens more on Tuesday morning, when blasts went off at Brussels Zaventem Airport and on the city’s subway.

Months after attacks in Paris by Islamic extremists left 130 dead, French President Francois Hollande called the events an attack on all of Europe.

Anne Hidalgo, the mayor of Paris, said the Eiffel Tower would be lit up in the colors of the Belgian flag.

“I am shocked and concerned by the events in Brussels. We will do everything we can to help,” British Prime Minister David Cameron posted on Twitter.

Russian President Vladimir Putin said the blasts “show once more that terrorism knows no borders and threatens people all over the world,” the AFP reported, citing a Kremlin statement.

German Foreign Minister Frank-Walter Steinmeier also expressed his solidarity in the “dark hours” of the attacks. “Belgium is not alone,” he said in a tweet shared by the German Foreign Office.

Pope Francis prayed for the victims of the attack and their families.

“He expresses his deepest sympathy to the injured and their families, and all those who are contributing to relief, asking the Lord to bring them comfort and consolation in the ordeal,” Cardinal Pietro Parolin, the Vatican’s secretary of state, said in a statement, the New York Times reported. “The Holy Father again condemns the blind violence that causes so much suffering and implores God for the gift of peace.”

U.S. President Barack Obama, who is traveling in Cuba, was briefed on the attacks Tuesday morning, and the White House was communicating with Belgian officials about the explosions, the Associated Press reported.

“The United States stands with people of Belgium. We are ready to support the investigation as appropriate.” John Kirby, Department of State spokesman, said in a statement.

Republican Donald Trump was the first U.S. presidential candidate to weigh in on the attacks.

“Do you all remember how beautiful and safe a place Brussels wss (sic),” Trump posted on Twitter. “Not anymore, it is from a different world! U.S. must be vigilant and smart!”

In the wake of the Paris attacks in November, Trump called for increased surveillance on American Muslims and proposed a ban on Muslims entering the country.

Democratic candidate and former Secretary of State Hillary Clinton said it would be unrealistic to shut down U.S. borders in response to the attacks.

“I think we’ve got to recognize that the threat posed by the modern incarnation of terrorism is one that we have to be vigilant against. I know that Americans have every reason to be frightened by what they see,” she said in an interview on Good Morning America, adding that the U.S. should tighten security.

“We stand with our European allies to offer any necessary assistance in these difficult times,” Sanders said in a statement. “Today’s attack is a brutal reminder that the international community must come together to destroy ISIS.”

ISIS claimed responsibility for the attacks on Tuesday, the AP reported.

“The wave of terror that has been unleashed in Europe and elsewhere around the world are attacks against our very way of life and against the democratic values upon which our political systems have been built,” Ohio Gov. John Kasich said in a statement, adding that the U.S. must strengthen its alliances and reject deadly acts of terror.

“We must redouble our efforts with our allies to identify, root our and destroy the perpetrators of such acts of evil,” he said.

Texas Sen. Ted Cruz said the attacks in Brussels are not isolated incidents.

“They are just the latest in a string of coordinated attacks by radical Islamic terrorists perpetrated by those who are waging war against all who do not accept their extreme strain of Islam,” the Republican presidential candidate said in a statement.

“Radical Islam is at war with us,” he said, vowing to defeat it as president. 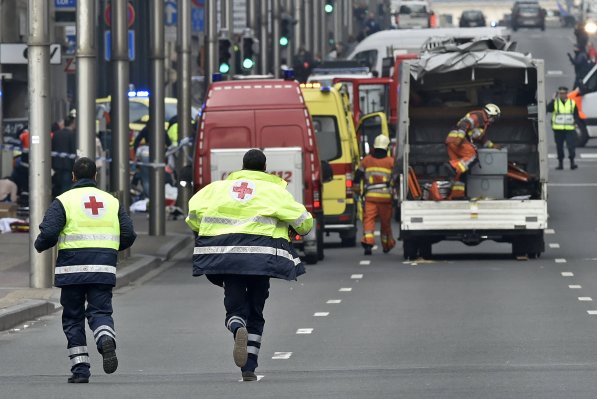