Furious parents and health care professionals in China are demanding to know how almost $90 million of improperly stored and potentially fatal vaccines were distributed across some two-thirds of the country over the past five years, in the latest public-health scandal to raise serious questions over the efficacy of the Chinese Communist Party’s rule.

According to state media, a mother and daughter from eastern China’s Shandong province have been caught peddling 25 kinds of unrefrigerated vaccines — including for polio, mumps, rabies, hepatitis B, encephalitis and meningococcal diseases — to medical facilities across 24 Chinese provinces since 2010.

Inflaming the public backlash, authorities had apparently known about the case since last April, though only publicized the news late Friday in a belated attempt to trace potential victims. Moreover, the elder suspect, a 47-year-old woman surnamed Pang, had apparently been convicted of the same offense in 2009 but only received a suspended sentence. State media admitted the compromised inoculations could have resulted in paralysis and even death.

“Twenty-four provinces, five years already, and how many children! It’s been nearly a year and then they reveal this! Isn’t this genocide? Words cannot express how angry I am!” posted one user of China’s Twitter-like microblog Weibo, reports the BBC.

“This is a matter of life and death,” one Beijing-based doctor told Radio Free Asia. “They should make an announcement about this as soon as possible … so we can locate these items and cut off the supply, so no more people are harmed.”

The health scandal is China’s largest in financial terms on record, and the nation’s most serious since 2008, when the toxic chemical melamine was discovered to have been added to children’s milk powder, causing at least six infants to die and 300,000 to become ill.

The fallout from that disaster continues today: stores in China’s semiautonomous satellite of Hong Kong are frequently overrun with mainland shoppers buying locally produced milk powder, which they believe is more trustworthy. Because of a lack of transparency, medical scandals, even those ostensibly put to bed, tend to fester among Chinese consumers.

Shattered public confidence owing to the vaccine scandal may also portend more widespread public-health concerns. The rise of the antivax cult in the U.S. and Europe, despite zero medical evidence of dangerous side effects, demonstrates how harmful misinformation can flourish even within democracies with freewheeling media environments.

Chinese parents now have legitimate reasons to question whether to give children what may well prove vital inoculations. Although most routine jabs are mandatory in China, experts fear many parents may now try to find ways around giving youngsters the potentially life-saving treatments.

“I would not be surprised if parents started to think twice about giving their children locally manufactured vaccines, and a lot of them are likely to turn to imported treatments,” Sophie Cairns, senior life-sciences analyst for the IHS analysis firm, tells TIME. “In general, patients tend to have quite a low opinion of public health care in China, and this is likely to make tensions worse.”

Authorities have set a March 25 deadline for the pharmaceutical companies and distributors believed involved in the bogus vaccine ring to come up with information about the whereabouts of the drugs. (The mother and daughter are thought to have used a network of some 300 suppliers around the country.) However, authorities have refused to speculate how many people may have been affected. Although strict rules govern the sale and storage of vaccines in China, red tape and poor enforcement prompt many health care facilities to source supplies from the “grey” market.

“We will thoroughly investigate all clues in the case and once we get to the bottom of it then we will severely punish those found to have violated the law,” the Shandong food-and-drug administration said in a statement on its website.

This is unlikely to assuage the ire directed at Beijing authorities, whose promise of delivering higher living standards in exchange for blind acquiesce to the Chinese Communist Party is increasingly strained by economic and environmental privation. China suffers some of the worst water and air pollution in the world; the latter is thought responsible for up to 670,000 deaths annually. Food safety also ranks as one of the chief concerns for Chinese consumers following a slew of high-profile scandals, including fake eggs, exploding watermelons and the widespread sale of putrid meat.

Following the vaccine scandal, Chinese are increasingly waking up to the question: Given the very real chance they fall ill from the air they breathe, the food they eat or water they drink, can they even trust the medical treatment their doctors provide? 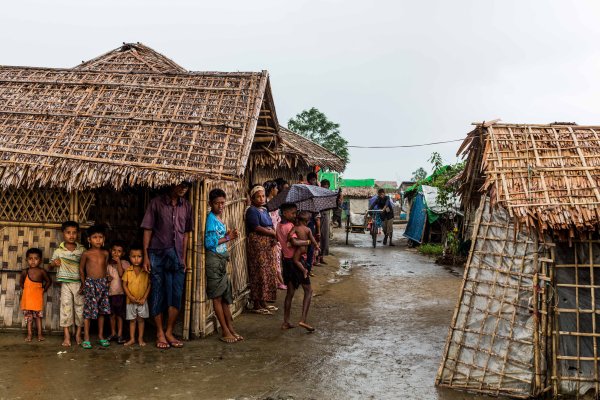 U.S. Says Burma's Treatment of Rohingya Is Not Genocide
Next Up: Editor's Pick