Who Is Nyle DiMarco, Who Rocked Dancing With The Stars on Monday Night?

Peta Murgatroyd and Nyle DiMarco on 'Dancing With The Stars', Monday, March 21, 2016.
Adam Taylor—ABC via Getty Images
By Nash Jenkins

You’ll know Nyle DiMarco from America’s Next Top Model, which he won in the show’s final season last year, but on Monday night, on Dancing With The Stars, the supermodel proved that he’s also a more than competent dancer.

“You could be America’s Next Top Dancer. Unbelievable,” Bruno Tonioli, the Italian choreographer and dancer who sits on the show’s panel of judges, said after DiMarco’s routine, which was set to DNCE’s “Cake By The Ocean.”

What’s particularly compelling about 26-year-old DiMarco is that he could not hear this compliment, or the music to which he danced. DiMarco is deaf.

He is also determined to prove — and has so far been successful in proving — that deafness is not a prohibitive disability. Like actress Marlee Matlin, who played the intrepid political strategist Joey Lucas in The West Wing and who also cannot hear, DiMarco hopes to use his elevated status to dispel misconceptions about the deaf community. According to his website, he’s a creative collaborator on an app designed to teach American Sign Language (ASL) and serves as an honorary spokesman for the advocacy group Language Equality and Acquisition for Deaf Kids.

Unlike Matlin, DiMarco was born deaf — as were his two brothers, his parents, and grandparents, according to a Washington Post story published last August in the early weeks of his candidacy on Dancing With The Stars. He studied mathematics at Gaullaudet University in Washington, a private institution for deaf students.

In the years since he graduated, he’s held work as an actor and freelance model, though the events of the last year — America’s Next Top Model and now Dancing With The Stars — place him on the precipice of fame.

“I’m ready to take the world by storm and have them look at me and say, ‘deaf people can dance,'” he told People via an interpreter.

In Monday night’s performance, DiMarco earned 23 points out of a possible 30, putting him in first place (he’s tied with Ginger Zee and Wanya Morris). There were some mishaps in his preparation for the episode, including an accidental collision with his pro partner Peta Murgatroyd that required four stitches above his eyebrow, but the performance was seamless. He says he keeps rhythm by paying close attention to Murgatroyd’s.

“I’m surprising myself that I actually can dance. Peta, my partner, was also surprised that I can dance,” he told People. 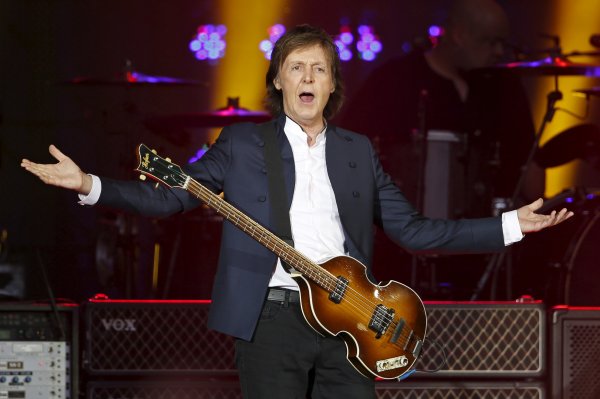 Paul McCartney Is Trying to Get Back the Rights to His Beatles Songs
Next Up: Editor's Pick