Water Failures Are Putting the World’s Health at Risk

A man wades through a garbage filled water canal in downtown Port-au-Prince, Haiti, on Feb. 28, 2016. Scientists believe cholera was introduced to the country's biggest river by inadequately treated sewage from a base of U.N. peacekeepers.
Dieu Nalio Chery—AP
Ideas
By Christine Sow and Susan Barnett

Christine Sow is President and Executive Director of Global Health Council, and Susan Barnett is Founder of Faiths for Safe Water.

The world reacted in horror and indignation this week when a reporter posted a photo of a Syrian woman forced to bath her 20-day-old newborn in a puddle in a refugee camp on the Greek-Macedonian border. The plight of this family is clearly unacceptable; lacking access to a safe water source puts every family member at risk, but especially the children. Today is World Water Day, but for much of the world, you wouldn’t know it.

There are 663 million people around the world live without access to safe water. And about 2.2 billion people—one sixth of the world’s population—live without the dignity and safety of adequate sanitation. Many are trapped in the cycle of poverty, and without water and sanitation, there is no way out.

Even more surprising, healthcare institutions fair little better. In the U.S. we take for granted that an expectant mother will be admitted to a hospital with running water and sanitation. However, a report published last year by the World Health Organization revealed that almost 40% of healthcare facilities around the world do not have access to safe water and almost 20% do not have even basic sanitation.

This wide-reaching study looked at 54 low- and middle-income countries, and found that even soap for hand-washing, one of the most effective and cost-effective ways to prevent infection, was absent from more than one-third of the facilities. The study’s authors note that this “lack of services compromises the ability to provide basic, routine services, and compromises the ability to prevent and control infections.” The direct and dire consequences of these conditions were clearly seen during the recent Ebola crisis in West Africa, where the high mortality toll of the disease among health workers has been attributed in part to the lack of adequate water sources and sanitation in healthcare facilities.

Ebola is not a highly contagious disease; it can only be spread by direct contact with infected bodily fluids. However health workers were obliged to work in inhuman conditions where they routinely came in contact with infectious matter and were unable to properly protect and disinfect themselves, their gear, or their physical surroundings. It is estimated that nearly 1 in 12 health workers in Liberia died during the epidemic. The loss of doctors, nurses and midwives was tragic, and it has led to a deadly ripple effect on the health of the population, especially mothers and children. Maternal mortality was estimated to have increased by 111% in Liberia and child mortality by 28% across the three Ebola-hit countries.

The ongoing cholera crisis in Haiti is another example of how the lack of adequate water supplies has led to a deadly water-borne disease traveling across borders to infect a population where it had not been seen for more than 100 years. It’s estimated that 8,600 Haitians have died of cholera, brought into Haiti by U.N. peacekeepers from Nepal. Litigation is ongoing around the responsibility of the UN to have prevented this senseless tragedy.

In 2014, during the Haiti cholera crisis and before Ebola became a household name, President Barack Obama launched the Global Health Security Agenda as a partnership of international organizations, non-governmental organizations and some 50 nations, to strengthen the capacity to prevent, detect and rapidly respond to infectious disease threats. The administration’s recognition of the global threat posed by infectious disease was timely but has fallen short in addressing the root causes of the spread of infectious disease.

The agenda focuses on strengthening laboratory capacity, surveillance systems and global cooperation in order to ensure health security. All good ideas, however a provision for basic water and sanitation within health facilities and communities does not explicitly appear in any of the its 11 “action packages.” The absence of this basic component represents a significant missed opportunity to rally global leaders and policymakers around this immediate—and obvious—need. To put a further point on it, in a recent WHO survey, only 21 out of 86 countries surveyed report having a plan in place to install safe drinking water and sanitation in their health facilities.

This situation is made all the more infuriating because unlike so many crises facing our planet, the lack of access to safe water, soap and sanitation, is solvable. Basic, sustainable, cost-effective approaches abound. This is not an expensive, high-tech problem; it’s a problem of prioritization.

Every global health and development policy and piece of legislation must contain provisions for sustainable water and sanitation. Anything less is a plan that is guaranteed to fall short of its goals. At a time of tight budgets, it’s smart, logical and cost-effective. But it’s also a matter of who lives, and who dies, and who is forced to bath her newborn baby in a mud puddle. 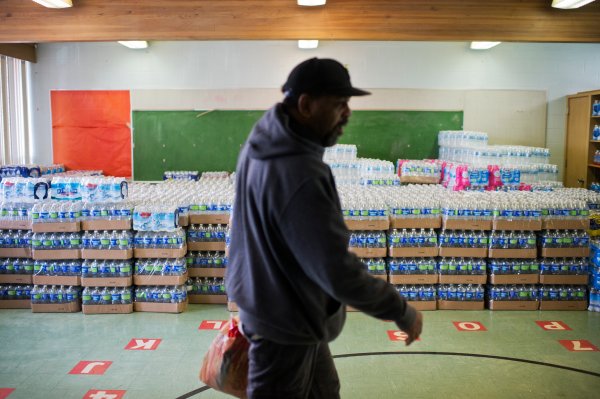 America’s Water Crisis Could Be Worse Than You Know
Next Up: Editor's Pick