There are nearly 40 photography festivals and trade fairs across East, Southeast and South Asia, with new ones, like Photo Kathmandu, PhotoBangkok Festival and Chennai Photo Biennale, sprouting up every year.

While the phenomenon is not limited to Asia, its relatively short history and yet rapid growth in the medium make the region especially attractive.

For one, as Europe and North America’s digital camera markets become saturated, manufacturers turn to explore Asia’s untapped lands. But more uniquely, for decades, the mere idea of documenting the reality using a camera was difficult, and at times even considered criminal under many military authoritarian regimes in the region. As nations move to embrace economic freedom and loosen up censorship, the media — particularly social media — has experienced a tremendous growth.

“There has been an explosion in the last four years of new media and also printed versions [in Myanmar],” says Christophe Loviny, director of Yangon Photo Festival. “Only for the last one or two years, the whole country, except for very remote areas, is covered with 3G, meaning that people have internet and Facebook,” Loviny says, adding that the mass audience is eager for stories told through photography. “We put a few photo essays online as a test, and one, for example, had three million hits in just one weekend,” he says.

Shahidul Alam, the founder of Chobi Mela International Photo Festival in Dhaka, Bangladesh, the first ever in Asia, also acknowledges the trend. “There are many photo clubs all over Bangladesh which are social-media based clubs,” he says. “These virtual communities are very vibrant. They are often like salon clubs producing pretty pictures but they are keen on photography, so much so that recently, we brought out two books largely by these amateur photographers.”

Alam established Chobi Mela in 1999 in a string of efforts to popularize photography as a storytelling tool and an art form in a country that has endured poverty and political unrest in its recent history. He also set up the Pathshala South Asian Media Institute and Drik Photo Agency.

The inspiration to start Chobi Mela came from a tour Alam took to the Rencontres d’Arles Photo Festival and to Magnum’s headquarters in France with a few young Bangladeshi photographers he led. “They were completely on cloud nine,” says Alam. “I could see this transformation within these few youngsters, and I realized that that’s a feeling others needed to have. If I can’t take them to the festivals, we’ll bring the festivals to them,” he adds. That’s how Chobi Mela started, featuring the work of western photographers but also creating a platform to share the work by locals artists.

The success of the Bangladeshi festival triggered others to follow suit, with a focus on supporting local photographers in great need of coaching and showcase.

The Yangon Photo Festival, for example, features work produced by Myanmar photographers trained in the festival’s own year-round program, which now has 500 alumni, including many ethnic minority students. Created by Loviny in the aftermath of the 2007 Saffron Revolution, the festival has been under the patronage of Aung San Suu Kyi since her release from house arrest and has become one of the largest cultural events in the country. “They are really documenting the democratic transition. It’s Myanmar by Myanmar photographers,” says Loviny, adding that local photographers cover the region from a different perspective than that of their Western counterparts. “[My Western students] always have a tendency to darken things. They think that if you make the story [more negative], it’d be stronger, which is wrong.”

Francoise Callier, program director at Angkor Photo Festival in Siem Reap, Cambodia, echoes the opinion and stresses on the unique access local photographer can achieve–an asset they can profit from.

At Angkor too, the goal lies in education, with free workshops taught by seasoned photographers for 30 emerging talents. “We realize that there were a lot of young photographers in Asia [who] couldn’t afford to pay for workshops,” Callier says.

Last year, Vietnamese photographer Linh Pham was one of the workshop participants. “The sense of community is strong and people, even some big names, seem unhesitant in sharing their ideas, work process, industry inside and critique,” he explains. “And this is something you could spend a few grand to take in the States or Europe just to hear the same things.”

The results for attendees have been rewarding. Photography festivals are indeed crucial for Asian photographers to gain contacts, get discovered by photo editors and gallery owners, get assignments and even feel part of a community.

David Barreda, visual editor of ChinaFile, a New York-based online magazine covering China under Asia Society, attended Lianzhou Photo Festival, a leading event in the Chinese festival circuit, in hopes of discovering new work. “That has really shown dividends for me in the last couple of months since I’ve been back,” he says. “I have just been more connected to photographers in China and more editors in Asia who look at Asia like I do.”

In China alone, there are over 10 photo festivals and the number is growing as a result of local governments’ attempt to boost tourism and the local economy. The longer running, more reputable festivals often take place outside the provincial capitals, finding an audience far beyond first-tier cities such as Beijing or Shanghai.

Such popularity might show its downside, as many organizers compete to become the largest in scale. “It was just too big to have 300 exhibitions for just 5 days. It’s crazy because you’re not going to 50 exhibitions every day,” says Callier, who attended two festivals in southwestern China.

Moreover, these shows often lack a strong theme and academic support, with hosts showing little effort in curating and helping photographers grow, says Yining He, a Chinese curator and photo critic. She suggests that engaging homegrown curators and photographers who received training in the West might be a solution to providing high-quality programs more geared towards a local audience.

“Festivals should also celebrate identity and relevance, in addition to photography,” says Singaporean photographer Kevin WY Lee, who founded Invisible Photographer Asia. “The real developmental purpose should be about self-actualization, that is to say, reach a point, and a good problem, where there is so much good local content that it becomes more difficult to put in ‘international exhibitions’ repeated in other festivals just to fill a program.”

But Poulomi Basu and C.J. Clark, a couple of photographers and photo editors who kick-started Just Another Photo Festival in Delhi last year, believe that diverse work from across the globe should be featured in order to inspire an audience who can’t afford to travel and dream big. “They know what the struggle is like to live in a slum, they don’t need to see work that tells them what they already know,” Clark says. Utilizing a mobile projector and a screen, the team brought visual stories by the world’s most renowned photographers into Delhi’s slums and schools. Their goal is to break down the barriers of art as an exclusive and often intimidating elitist practice and make it “unabashedly about the audience,” Basu says.

Ye Ming is a freelance writer, photo editor and contributor to TIME LightBox. She is based in China. Follow her on Twitter. 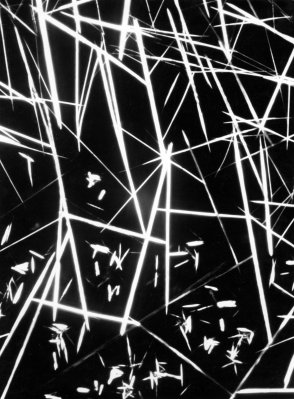 Creating Abstract Art through the Microscope
Next Up: Editor's Pick