This Startup Makes Selling Furniture Easier Than Ever

If you have ever sold something so big as a loveseat on Craigslist, you know it can be at least as painful as it is productive. But as with nearly everything these days, there’s a startup set on easing the whole process.

If consignment shops and Craigslist had a lovechild, Move Loot might be it. The Bay Area-based company is set to announce March 22 that it is expanding to new markets including Chicago, Washington, D.C. and Philadelphia, as well as launching nationwide shipping. And if you’re planning on moving—or buying or selling furniture—it’s an option you’ll want to know about. As cofounder Bill Bobbitt says, Move Loot’s mission is “really re-imagining the way that people buy and sell.”

First let us review what selling furniture on Craigslist can be like. To begin, you have to take photos, pack your post with search keywords, and figure out how to price the piece both high enough (to signal that it’s nice) and low enough (to signal it’s a deal). Then you might field several queries from total strangers, just so you can rearrange your schedule to meet one of them at your home, where they might hem or haw or haggle before you get a sale. You may top it off by trying to pretend you’re both professional movers, scratching up your walls while finally getting the thing out of your apartment.

Last year, I went through most of this process leading up to a move. But after several email exchanges and repostings and canceled viewings, my much loved pub-style dining set remained unsold at $200. Desperately needing to get it out of my apartment, I started to consider spots where I could just dump the thing. Which I hated, because it seemed like a big waste. That’s when I turned to Move Loot.

Move Loot acts as a go-between for furniture sellers and buyers. Here is how it works: On Move Loot’s site, you enter basic information about and upload photos of your item, including images of any damage. In my case, Move Loot emailed me a day later, offering up to $125.

Once an offer is accepted, Move Loot will edit out the background on photos to give the site a consistent and more professional look, also giving the item a fancy name (“Naomi Dining Set.”) About 10 days later, my item sold, and I got my cut delivered through payment-app Venmo:

Move Loot’s prices are based on factors like an item’s condition, what it’s made of, the style and the size. In cases where the item is from a known brand, Move Loot will take that into consideration too. The company’s cut of a sale changes based on factors like the chance an item will sell, but it generally takes about 30 percent of the sale price.

Once the piece sells—and this may be the best part—Move Loot’s movers come pick it up for free. If the item doesn’t meet the firm’s standards for some reason (like the seller failing to mention they are a heavy smoker and the fabric reeks), it will be refused. Refusals can come earlier in the process too — the company might decline something it doesn’t think will sell because the style is so outdated, for instance.

In the end, I was happy to take a cut on the money I might have made selling my dining set all on my own, because I didn’t have to deal with the logistical hullabaloo. And Move Loot delivered the set to what is, I hope, some happy soul who kept my furniture out of a landfill and paid cash to me rather than Ikea in the process. (The company positions itself as a do-gooder, noting that furniture is the second-highest contributor to municipal waste.)

If my dining set didn’t sell in the first 60 days, I would have had the option to let Move Loot start slashing the price until somebody bit. If you’re buying something from your area, delivery prices range from about $49 to free, if the piece costs $499 or more. If you’re using Move Loot’s national shipping to get an item from farther away, prices could range from about $100 to $1,000, with the vast majority falling at the cheaper end.

Unlike so many of the ascendant startups that are removing middlemen and facilitating peer-to-peer transactions, Move Loot is inserting a “white-gloved” hand into the buying and selling game. “The harder part of this is the logistics. That’s where we spend most of our time,” says Bobbitt, who had his “aha!” moment after finding that “moving is a pain in the ass” en route from Dallas to San Francisco about three years ago.

“It’s trying to make sure it’s picked up in a timely manner, it’s not damaged, it’s photographed, it’s clean and it’s delivered to you in a timely manner,” he says. “We do a lot in between, but hopefully the customer never really sees that.”

With Tuesday’s expansion, the company is outsourcing some of the logistics that it has been doing in-house, like shipping and delivery in certain areas. That does come with the risk of losing oversight. And there are plenty of ways for something to go wrong. After selling my dining room set, I ordered a dark brown chaise longue that looked pristine in the pictures but showed up with a bunch of white specks on it (almost like someone had painted a ceiling above it). Bobbitt says about five percent of pieces get rejected on delivery. Sending it back and getting a refund was easy, but disappointing.

The company went live in San Francisco in late 2013, with the four founders doing the pickups and drop-offs themselves in a rented Penske truck. After going through the Y Combinator accelerator, they raised a seed round and launched in the Raleigh-Durham area (North Carolina claims to be the “Furniture Capital of the World”), followed by Los Angeles and New York.

As the company has scaled and raised nearly $22 million in funding, the founders have made new partnerships with other firms. Move Loot now acts as a clearinghouse for big companies that don’t want to deal with returned furniture. It also serves as an e-commerce portal for local consignment shops, furniture shops and furniture refurbishers. For buyers, that means there’s plenty of new stuff among the used — and the possibility of nabbing a previously returned item from a site like One King’s Lane for a huge discount.

Move Loot is now selling about 50,000 units per year. But the team hopes that with this expansion and future relationships with “logistics partners” in other cities, that figure will triple by the end of this year. And the dreams get bigger still. The reason the company has “loot” in the title is because, cofounder Jenny Morrill says, it plans to keep expanding to other categories. After all, she says, if they’re at your house picking up a loveseat, why not also take your sporting goods and electronics and décor and sell that on your behalf?

“We knew from the start,” says Morrill, “that this was something bigger than furniture.” 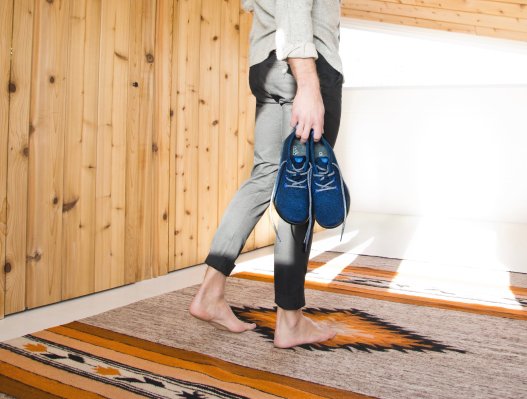 The World's Most Comfortable Shoes Are Made of Super-Soft Wool
Next Up: Editor's Pick