President Barack Obama stands with Salvador Sanchez Mesa, Vice President of the Council of Ministry, as they take part in a wreath laying ceremony at the Jose Marti memorial in Revolution Square on March 21, 2016 in Havana, Cuba.
Joe Raedle—Getty Images
By Melissa Chan

President Barack Obama sparked outrage among some social media users on Monday when he was photographed in front of a mural of Marxist revolutionary Che Guevara in Cuba.

The commander-in-chief was blasted on Twitter after he was photographed standing in front of a Cuban ministry building featuring a five-story representation of Guevara in Havana’s Revolution Square, according to the Washington Examiner.

“So, Obama couldn’t make it to Chris Kyle’s memorial service, but he will stand at attention for Che Guevara,” another chimed in.

Obama was standing with several officials while taking part in a wreath laying ceremony. He’s in Cuba for a historic two-day visit. Guevara, who was executed in Bolivia in 1967 for inciting a revolution, considered the U.S. his worst enemy, as TIME once noted. 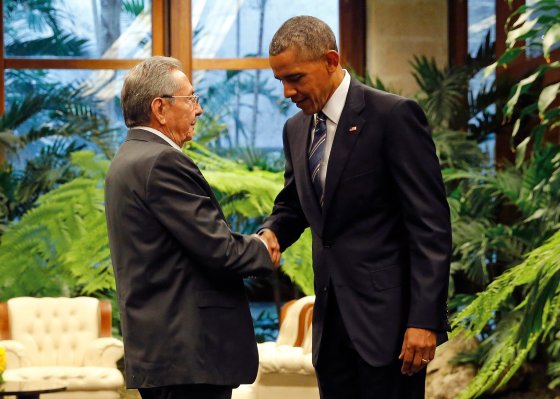 See Photos from President Barack Obama's Trip to Cuba
Next Up: Editor's Pick