With the prospect of a showdown with Donald Trump growing more likely by the day, likely Democratic nominee Hillary Clinton took aim at the bombastic GOP front-runner Monday, previewing an effort to cast him as unqualified on critical foreign policy issues.

Speaking to an audience of more than 10,000 pro-Israel activists from a rotating stage at the American Israel Public Affairs Committee policy conference in Washington, the former Secretary of State repeatedly used Trump as a foil through her 34-minute speech to emphasize her own commitment to the U.S.-Israel alliance.

“America can’t ever be neutral when it comes to Israel’s security or survival,” she said to applause. “Some things aren’t negotiable and anyone who doesn’t understand that has no business being our president.”

Though she never mentioned Trump by name, Clinton argued the real estate mogul is an unpredictable bully who could not be relied on to defend Israel’s interests and keep the United States safe. “We need steady hands, not a president who says he’s neutral on Monday, pro-Israel on Tuesday, and who-knows-what on Wednesday,” Clinton said, a line of attack that she will certainly repeat in the fall.

Noting that Jews will celebrate the holiday of Purim this week, Clinton implicitly compared Trump to the Old Testament villain Haman, and juxtaposed Trump’s comments about barring Muslim refugees to the U.S. barring many Jews fleeing the Holocaust from entering in the 1930s.

In an MSNBC town hall in February, Trump said he would be “neutral” in the conflict in an effort to broker a peace deal in the Middle East, a line he will be forced to explain later Monday when he addresses the group. “Let me be sort of a neutral guy, let’s see what—I’m going to give it a shot,” Trump said. “It would be so great.”

Clinton cut into Trump for what was widely seen as a gaffe. “Let us never be neutral or silent in the face of bigotry. Let’s defend the shared values that already make America and Israel great,” Clinton said, echoing a line she has been using on the campaign trail to hit Trump.

Her speech was also a key opportunity to shore up support from the powerful interest group that has helped shape American foreign policy for generations. Paying homage to the relationship between the United States and Israel, Clinton called for increased military-to-military and intelligence cooperation between the two countries.

Taking a veiled shot at President Obama, who has been criticized by the group and Israeli leaders for his icy relationship with Israeli Prime Minister Benjamin Netanyahu, Clinton said she would resolve differences with her counterparts privately.

“We will never allow Israel’s adversaries to think a wedge can be driven between us,” she said. “When we have differences, as many friends do, we will work to resolve them quickly and respectfully.”

Clinton also delivered some red meat to the pro-Israel audience, strongly condemning the boycott, divestment, and sanctions movement, as well as rising anti-Semitism and anti-Israel sentiments on American college campus and throughout Europe. She also condemned Palestinian leaders for “inciting violence” and for compensating the families of those who commit acts of terrorism.

Israeli politics can be a minefield for U.S. politicians, but one that plays to Clinton’s strengths a diplomat. Clinton called for a continued focus on the stalled peace process, which she has been engaged in on-and-off for more than two decades.

“As president I would continue the pursuit of direct negotiations,” she Clinton, adding that she was opposed to efforts by the United Nations to impose a solution on Israel and the Palestinians.

The former First Lady during the Oslo Accords and senator from New York, Clinton has long been versed in the issues of the pro-Israel community. But like everything in that turbulent region, that relationship has often been fraught, and she has been the target of attacks from both the left and the right over her views on Israel.

Some pro-Palestinian groups have long seen Clinton as too hawkish in her support of Israel. Clinton was criticized in 2014 by pro-Palestine activists after she said in an interview with the Atlantic in 2014 that Hamas had “stage-managed” the conflict with Israel that summer, appearing to diminish the casualties in Gaza.

She has also been targeted by conservatives: the influential Rabbi Shmuley Boteach and New Jersey Gov. Chris Christie ally took out a full page advertisement against the former Secretary of State on Saturday, with the headline “Hillary Clinton must disavow her anti-Israel advisors.” The advertisement slammed Clinton’s longtime friend and email-partner, Sidney Blumenthal, and called his journalist son Max Blumenthal “anti-Israel.”

Clinton’s speech was well-received by the group, which frequently interrupted her with applause and she left the stage to a prolonged standing ovation.

In addition to Trump, GOP candidates Ted Cruz and John Kasich will address the conference Monday evening. Clinton’s distant rival for the Democratic nomination, Bernie Sanders, skipped the conference to campaign in Western states voting Tuesday. His more dovish foreign policy views would have faced a skeptical reception at AIPAC.

In a tense moment outside the AIPAC conference in Washington, D.C., on Sunday, Boteach and Blumenthal confronted each other. “You lied about me in the New York Times!” Blumenthal shouted at Boteach. “Stop your anti-Semitism, stop your Jew hatred!” Boteach shouted back.

The exchange was a reflection of the tenuous line Clinton will have to walk on the road to the general election as she appeals to both wings of American-Jewish political spectrum.

Clinton was scheduled to travel to Arizona on Monday after her speech, where she is campaigning in advance of Tuesday’s primary there. 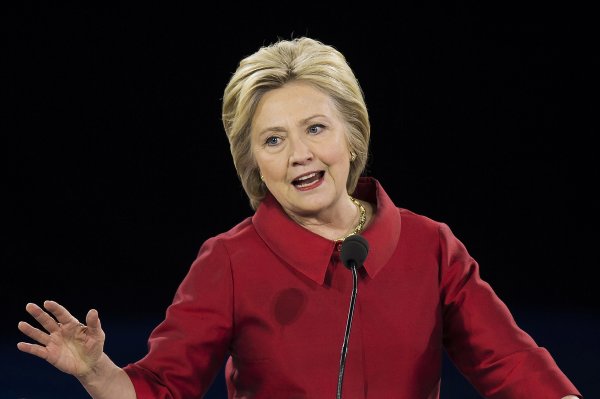 Read Hillary Clinton's Speech to AIPAC
Next Up: Editor's Pick