Donald Trump on Sunday denied that his campaign manager manhandled a protester after video surfaced showing him and a member of Trump’s security detail appearing to grab the young man by his collar during a rally in Arizona.

The Republican front-runner praised manager Corey Lewandowski amid scrutiny over his encounter with the protester at a Tucson rally. Lewandowski and another man can be seen confronting the protester before they pull him back by his collar in a video obtained by CNN.

Lewandowski had gone into the crowd to remove anti-Trump signs, the mogul said during an appearance on ABC’s This Week. “I give him credit for having spirit,” Trump said. “He wanted them to take down those horrible, profanity-laced signs.”

“Security at the arena, the police were a little bit lax, and they had signs up in that area that were horrendous,” Trump added.

The young man had been asked to leave but instead grabbed the woman in front of him, which is “when the man to Corey’s left and many others in the scene react to her wincing,” Hicks said.

Trump stood by Lewandowski earlier this month when the campaign manager was accused of grabbing Breitbart News reporter Michelle Fields by the arm and pulling her back when she tried asking Trump a question during a campaign event, according to CNN. The news outlet said Lewandowski denied touching her and that Fields has pressed charges against him.

The Tucson event was also the scene of a violent encounter between when a Trump supporter punched and kicked another protester. That incident was also captured on video. 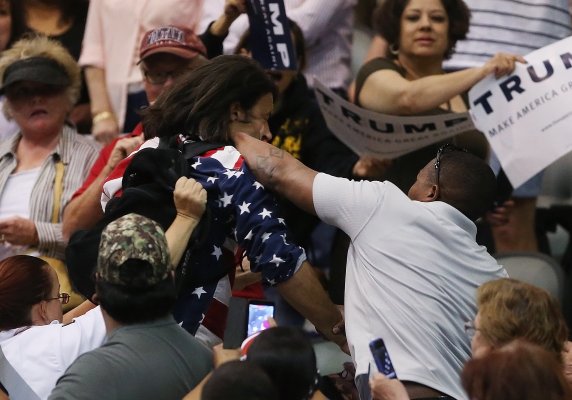 Anti-Trump Protester Punched and Kicked at Rally
Next Up: Editor's Pick