Anti-Donald Trump Protester Punched and Kicked at Rally in Arizona

Another Donald Trump rally was plagued by violence Saturday when a protester was punched in the face and kicked while being escorted out the Republican front-runner’s event in Arizona.

Video of the disorder, which erupted at the mogul’s rally in Tucson, shows a man shouting and holding an anti-Trump sign before he’s punched to the ground. It’s the latest in a recent string of clashes between Trump supporters and protesters at the presidential hopeful’s campaign events.

The protester, identified by NBC News as Bryan Sanders, said he was being led out of the rally when a man ripped his sign out of his hands before landing the blow. “I stumble back, sucker punch … and then you saw all hell break loose,” he told the news outlet. “He’s stomping me. What was going through my mind was: Put your arms over your head, because this political movement has gotten to the point where you may get beat to death inside of a rally.”

Police said Tony Pettway, 32,was charged him with assault with injury, according to NBC News.

Another video of the rally shows a man following the violence who appeared to be wearing a white hood and delivering a Nazi salute.

Trump last week denied that violence was taking place at his rallies after a protester was sucker-punched in the face at a North Carolina event and a campaign event in Chicago had to be canceled over security concerns. 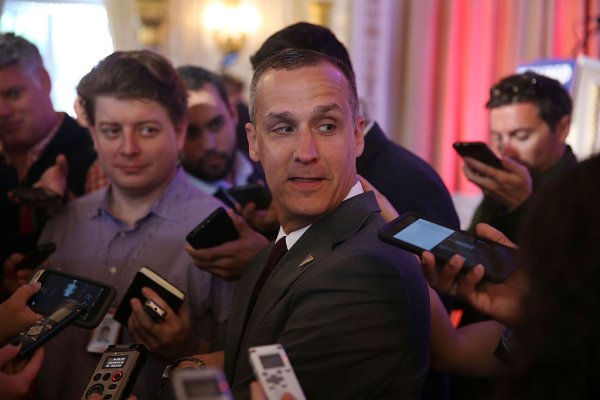