The Real Reason for Trump's Rise

The best explanation I’ve heard for a Trump vote was from a lifelong Republican in rural Mississippi. He called voting for Trump “the middle finger vote” to “a good ole boy system” that lines the pockets of elites in Washington while neglecting working men and women.

Anti-Trump Republicans are learning all the wrong lessons by focusing on the inflammatory showman instead of the failings of our platform and our party. To dismiss Trump’s ascendency by caricaturing him and his followers as racist simpletons ignores the real lesson of 2016—that grassroots voters have lost faith in elected officials and a government that isn’t living up to the promise of “by the people.”

Trump is the culmination of a massive, systemic problem of a party that asked what donors wanted, not its voters—a party that excelled in recent years at demonizing the opposition, while lacking the backbone to stop out of control spending.

All year, I’ve never heard Trump’s name in the same breath as words like individual freedom and liberty. I also never hear the same thing about what the Republican Party stands for. There’s widespread confusion on the fundamentals, and it’s infected the way Republicans govern: After promising to wrest power from President Barack Obama, Republicans elected in 2012 governed as liberals when they voted to add Obama’s $1.8 trillion omnibus spending bill to our already $19 trillion debt. Trump voters are asking, rightfully, tough questions that challenge the party’s neoconservatism orthodoxy: Why we are borrowing money to give it away overseas? Why are we arming so-called allies with weapons that end up in the hands of ISIS? If we spent half of all discretionary spending last year on defense—to the sum of almost $600 billion—why does ISIS seem stronger than ever?

What does the Republican party stand for, positively? Voters can’t tell you, and they turned to the best demonizer on reality television—Trump—to fight the establishment, not embrace it.

This driving factor is why the “Never Trump” movement is doomed. Even over the weekend, there was yet another Republican insider “roadmap” on how to beat Trump, instead of facing the hard reality that targeting him just isn’t working. Sanctimonious preaching by elite-funded super-PACs to subvert the voters as well as the man only supercharges enthusiasm for him and is going as well as Jeb Bush’s early anointment by the donor class. Just last week, former House Speaker John Boehner proved himself still equally tone deaf by taunting Trump supporters with his successor Paul Ryan as convention white knight.

This misses the point—the reason for supporting Trump is that he’s the one who will supposedly wrest the system from the contemptuous Washington professional class that’s enabled Obama. For rank-and-file Republican voters, Obama’s been a two-term Jimmy Carter, a president who won’t stand up to aggressors, and a failed negotiator (especially with Iran) who never tells you how good things will be, just how bad they can get.

The current Republican message clearly doesn’t fit the times. Tax cuts for wealthy “job creators” isn’t a selling point when the workforce participation rate is sitting at a 40-year low. People just aren’t getting ahead as they have in past decades, and the frustration is so great that voters want to go rogue, no matter the unknowns of a Trump presidency. These unknowns are petrifying, given Trump’s open authoritarianism in how he deals with dissent. His rallies are increasingly savage: Even his campaign manager is accused, and is shown on video grabbing a reporter and a protestor. This weekend in Tucson a supporter assaulted a protester, yet Arizona Trump endorser Sheriff Joe Arpaio dismissed claims Trump incited violence against protestors, telling MSNBC’s Alex Witt that criticism was “ridiculous and nitpicky.”

Trump will ultimately be the nominee if the best alternative to him is Ted Cruz, an obstructionist most often associated with shutting down the government. Cruz’s worldview is gloomy and dark, the embodiment of two decades of negativity that created the opening for Trump, while Cruz’s message is that he’s demonizer in chief. Trump’s central message is that he can work with people to cut deals—unlike the rest of Washington who are making bad deals that make our lives worse.

It’s pretty easy to say what Trump stands for: building a wall—a great one. Stopping free trade agreements that are harming American workers. Taking on special interests by not relying on super-PACs and other repositories of donor wealth. Even when I strongly disagree with him, as I do on Trump’s offensive rhetoric on Muslim refugees, he is right on one important point: Why let in refugees through a process that fails to screen security threats with any precision? Why does our government persist in relying on a broken system, and why do we not fix it?

And that’s perhaps Trump’s big-picture selling point: For far too long, we’ve accepted the failings of government without even trying to change it. We are told by politicians to ignore our common sense and listen to them because they know better. We are told to trust our government, without having a reason to trust in it. And now that voters are turning the tables and taking a stand with their vote for Trump, maybe Republican officeholders and seekers will stop telling and start listening. 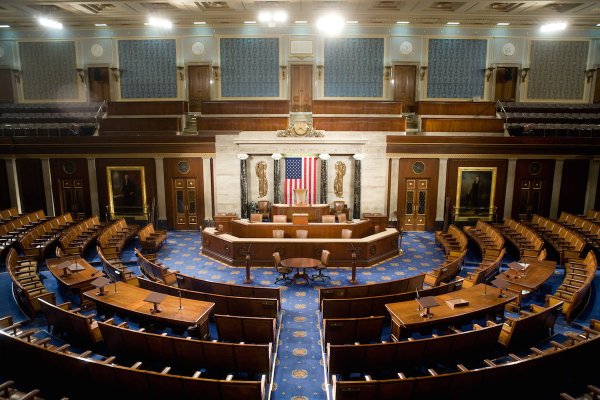 The Crazy Way Republicans Could Beat Donald Trump After Election Day
Next Up: Editor's Pick