The title page of the Survivors' Talmud.
Courtesy of American Jewish Historical Society and Center for Jewish History
By Lily Rothman

On Aug. 31, 1945, President Harry Truman sent a letter to General Dwight Eisenhower, the future president who was then running the American occupation of Germany. Truman had received a report on the condition of displaced persons—DPs, the term for post-war refugees who had no homes to which to return—in Europe, particularly Jewish DPs. And the president was not happy.

“Apparently it is being taken for granted that all displaced persons, irrespective of their former persecution or the likelihood that their repatriation or resettlement will be delayed, must remain in camps—many of which are overcrowded and heavily guarded,” he wrote. “Some of these camps are the very ones where these people were herded together, starved, tortured and made to witness the death of their fellow-inmates and friends and relatives.”

The United States had a particular responsibility to those DPs, the president concluded, and he hoped that the general would see things the same way.

Within a few years, that particular responsibility led to something unusual: what is considered to be the only edition of the Talmud—an important Jewish religious text and the repository of rabbinic law—ever printed by a national government. It is known as the Survivors’ Talmud, and it is a document that bears particular significance on Holocaust Remembrance Day (Yom HaShoah), which is marked on May 5 this year.

The particular page seen here is part of a rare full set that is being preserved by the Center for Jewish History in New York City. This title page depicts a barbed-wire fenced camp as well as the Mediterranean landscape of the holy land, and these words: “From bondage to freedom, from darkness to a great light.” The dedication reads:

The Survivors’ Talmud stemmed from reasons both practical and symbolic. Not only had the Nazis taken the homes, lives and livelihoods of the Jewish people of Europe, but they had also destroyed the artifacts of the religion. Just when many survivors felt they needed their faith or their culture more than ever, the sacred texts of Judaism were hard to come by. In 1946 a group of DPs who were rabbis asked if the Army could help publish a Talmud, as they had no copies available for study. When the Army agreed, an edition had to be sent from New York to be copied, as no complete version of the Talmud could be found in all of Germany.

As Gerd Korman has pointed out in the journal American Jewish History, the situation in 1946—after the end of the war but before the establishment of Israel—was such that the Allies had real concern for the survival of Judaism in Europe. Even though the genocide had been halted, it would be hard to sustain the rituals and knowledge of the faith without the important documents that had been lost. The U.S. forces in Europe also had already established a printing operation, working out of confiscated Nazi propaganda printing plants.

By the time printing was finished in 1950, many DPs had been resettled and the copies found their way to the places where Jews lived all over the world—including Israel. 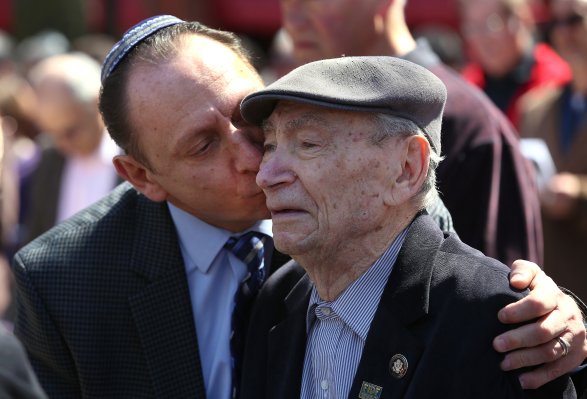 We Must Honor the Holocaust Survivors' Stories
Next Up: Editor's Pick