Meet the Mysterious Source of an Anti-Trump Ad

This is the story of a phantom who sponsored a political attack ad in the heat of Florida’s critical presidential primary and sidestepped federal transparency laws.

It begins with a single TV spot — one that aired last week on an independent, Spanish-language station in South Miami.

It then cut to Sen. Marco Rubio decrying how the United States is lifting its trade and travel ban on Cuba.

And like all political ads, the spot ended by disclosing its sponsor: “Inspire America.” Federal law requires such disclaimers for the sake of political transparency and informing voters.

But exactly what — or who — is Inspire America?

An easy answer refused to reveal itself.

So the Center for Public Integrity sought answers from the Federal Communications Commission.

Thanks to the Communications Act of 1934, broadcast TV stations must make public certain details of TV ads containing political candidates and issue advocacy. This includes the cost and run times of an ad buy, as well as basic information about the sponsor’s officers.

Inspire America, however, was nowhere to be found in FCC records.

Next, the Center for Public Integrity scoured Federal Election Commission databases for any mention of or reference to a political group named Inspire America.

The Center for Public Integrity then contacted the station where the ad aired. An employee referred questions to Marcell Felipe, general counsel for WFUN and WJAN, co-owned Spanish-language stations that had aired Inspire America’s ad.

Felipe said the ad — which aired 14 times on WFUN just before the March 15 primary — was not political, but instead a “public service announcement” to encourage voter turnout.

Therefore, he argued, his station wasn’t required to provide federal regulators with information about the ad or its sponsor, Inspire America.

But how could this be?

The ad, after all, featured two “legally qualified candidates” and addresses an “issue of national importance” — factors the FCC say triggers automatic disclosure.

The Center for Public Integrity pressed Felipe on this point. It was not until several correspondences later that Felipe revealed what he had withheld to that point: he was the true sponsor of the ad.

It was Felipe, too, who founded Inspire America — what he says is a new 501(c)(4) “social welfare” nonprofit. The group has yet to appear in Internal Revenue Service records, and such nonprofits are not supposed to make politics their primary purpose.

“If we are told that we have to disclose it, we’ll disclose it,” said Felipe, who deemed the ad a “get out the vote” ad. He said he would consult with an FCC lawyer about disclosing this particular ad.

And as general counsel of the very station that ran the ads, Felipe said he convinced WFUN to run the ad at no charge, given the ad’s supposed “public service announcement” status.

Having acknowledged being behind the ad, Felipe explained why he produced it.

“I believe that immigrants who come to the United States in search of democracy provide valuable contributions to our civic engagement and should be heard, particularly on how to promote democracy throughout the world,” Felipe said.

“Communities like ours that have come to the U.S. looking for democracy need a platform for dialogue on how to shape American policies and American values,” Felipe added.

WFUN and WJAN, to be sure, played a small, but nevertheless important role ahead of the Florida primary. It broadcasts “América TeVe,” which targets Cuban-Americans in South Miami. It also reaches homes in as far as Key Largo, Florida, about 70 miles south of central Miami.

But while Rubio won 62 percent of the Cuban-American vote in Tuesday’s Florida primary, he ultimately lost the Florida contest and dropped out of the presidential race after a crushing second place finish behind Trump.

Felipe is both a supporter of Rubio and the Republican Party: Federal records show he donated $2,700 to Rubio’s presidential campaign and has previously contributed to U.S.-Cuba Democracy PAC, a lobbying organization that itself has donated more than $250,000 to Republican lawmakers and $51,000 to Democratic lawmakers during the 2016 election cycle.

Why should knowing an ad’s sponsor matter to voters?

“Knowing the messenger of an ad is important in evaluating the ad’s message,” said Meredith McGehee, policy director at Campaign Legal Center, a nonpartisan campaign reform group. “If ads are running and the station isn’t disclosing, it creates a problem.”

After the Center for Public Integrity’s inquiry, Felipe and WFUN did eventually file details of the ad buy with federal regulators.

But the filing came one day after Floridians cast their votes, and by then, presidential candidates had packed their bags, leaving Florida to campaign in other states. 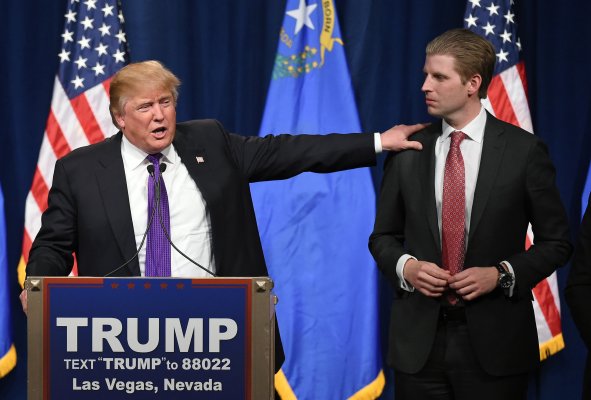 Donald Trump's Son Receives Threatening Letter in the Mail
Next Up: Editor's Pick