The Apple TV Is About To Be Much Easier To Use

Rumors of a new iPhone, iPad, and accessories for Apple Watch have dominated the conversation leading up to Apple’s special event on Monday.

However, as the date for Apple’s “Let us loop you in” unveiling approaches, little has been said about what changes are coming to Apple TV.

Apple’s fourth version of its set-top box that streams video from providers such as Netflix or Hulu and allows users to play games on the television using apps premiered near the end of 2015. The vision for the future of the living rooms showed promise, but users ultimately grew frustrated by the lack of an easy way to enter usernames and passwords—or text in general.

Since then, Apple has updated the iOS Remote app to give users the ability to enter text with an iPhone or iPad keyboard. The change has succeeded in easing some of the frustration.

But with tvOS 9.2 expected to debut in the days after the Apple’s event, it’s time we take a look at how Apple is improving the user experience of Apple TV, which starts at $149 The upcoming software update has been available to developers as a preview since January, and some details of what’s included have since slowly leaked out.

Perhaps the biggest addition to tvOS 9.2 is the addition of Siri dictation in text fields. Users will soon have the option to use the Siri Remote’s voice capabilities to enter queries, usernames, and passwords by voice instead of having to type them out using the remote’s trackpad that requires hunting and pecking letters using the on-screen keyboard.

For example, with the new feature you can open the YouTube app, go to the search tab, and use your voice to search for a channel or video, such as “John Oliver.” Apple news site MacRumors created a video detailing how the feature works, and it looks rather simple.

Additionally, users will be able to use Siri from any Apple TV screen to search the App Store for specific apps or categories. Just hold in the Siri button on the remote and request a search like “Show me March Madness apps.” Or you can search for a specific category such as “Games.” Previously, users had to open the App Store app and then enter a search query.

If using voice to enter commands isn’t something that interests you, tech news site iLounge reports that Bluetooth keyboard support will be new in tvOS 9.2. With a Bluetooth keyboard paired to your Apple TV, you can enter passwords or search terms without fear of someone listening in on your conversation with Siri.

Another feature that is sure to make users who have numerous Apple TV apps installed happy is the addition of folders, which helps users organize apps in an easy to navigate manner, instead having to scroll through of a large grid of icons. For example, users can create a folder for games, and another for educational apps, and so on. Creating a folder on the Apple TV follows the same process as iOS, whereby users can highlight and drag an app icon and then place it atop another app’s icon to create a folder.

While there’s sure to be more features included in the update, the addition of an easier way to enter text by voice and better organization using folders are both steps in the right direction for Apple’s bid to take over our living rooms.

You can tune in to Apple’s event on Monday using an Apple device including—you guessed it—the Apple TV. 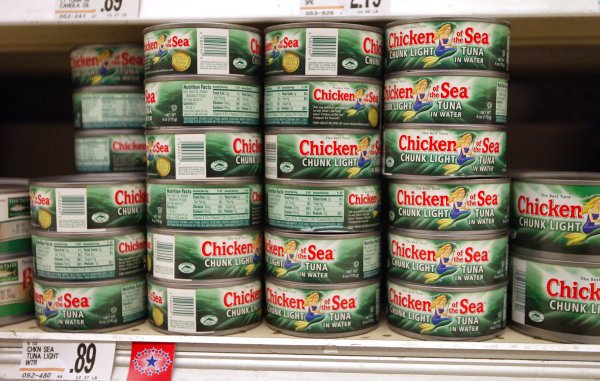 Chicken of the Sea Recalls Tuna
Next Up: Editor's Pick