What Happened Last Time a Political Party Establishment Was Challenged

It is one thing to live in interesting times, but another to live in historic times. And this spring is an historic time in American political history. We are in uncharted waters where a disconnect between Republican party leadership and the party base poses a threat not just to the GOP, but also to the Third Party System itself.

For Donald Trump’s expected presidential nomination constitutes a hostile takeover by an outside candidate — an event that has occurred only twice in the last 160 years.

The Third Party System of Republicans and Democrats started in 1856 when John Fremont (R) challenged James Buchanan (D) in the presidential contest. Over the next 160 years America has had only two major parties — Republican and Democrat. This remarkable stability of the Third Party System stands in contrast to both the First and Second Party Systems. They lasted only 30 years each before one of the political parties disintegrated (Federalist in 1816, Whigs in 1854).

Over those sixteen decades the ideology of each political party in the Third Party System changed. In the 19th century the GOP stood for energetic government, promoting the transcontinental railroad, and high tariffs, while the Democrats championed limited government and state rights. In 1932 the parties switched identities. The bottle labels stayed the same — R and D — but the contents inside were different. Starting with Franklin Roosevelt, Democrats now promoted an energetic government, and Republicans advocated the opposite (with the exception of national defense).

While both parties went through an ideological makeover, challenges to the each party’s establishment were few. In fact, only twice did a party nominate a candidate who was dramatically at odds with the leadership. Those two successful hostile takeovers were mounted by former U. S. Congressman William Jennings Bryan (D) in 1896 and by U. S. Senator Barry Goldwater (R) in 1964.

And now in 2016 we are witnessing a third successful hostile takeover from an outsider. But this time it is someone who has no political experience, and unlike either Bryan or Goldwater, has no ideological agenda. Bryan advocated a populist agenda, Goldwater a conservative one, but Trump has offered not a set of policies, but a list of promises (“Mexico will pay for a wall,” “Millions on millions of jobs will come back to America”). An effort to find consistent policies from the New York billionaire is like trying to nail jello to a tree.

In his attacks and ridicule of Republican Party leaders, Trump does resemble Bryan and Goldwater — who each channeled a frustration with the current party establishment. Bryan’s targets included the incumbent Democrat President, Grover Cleveland, who was disliked by a large portion of his party’s base. Resentment against Cleveland was so strong that senatorial candidate “Pitchfork” Ben Tillman from South Carolina earned his nickname by promising to put a pitchfork in the president’s rear.

While Bryan targeted the eastern conservative establishment wing of the Democrat party, Goldwater targeted his political adversary New York Governor Nelson Rockefeller — the icon of the powerful wing of the eastern moderate establishment of the GOP which had successfully promoted the nominations of New York Governor Thomas Dewey and Dwight Eisenhower.

Like Bryan in 1896 and Goldwater in 1964, Trump’s probable nomination has triggered strident attacks within his own party — if not a civil war. The two most recent Republican presidential nominees have denounced him as a liar and a fraud. Conservative columnist George Will called him “a presidential aspirant who would flunk an eighth-grade civics exam.” And the National Review devoted an entire issue to attacks on the New York billionaire by prominent conservative Republicans.

In some ways the attacks on Trump mirror the ineffectual efforts to stop Bryan and Goldwater, who lead the two past hostile takeovers of parties in the Third Party System.

The consolidation urged today by Trump critics reminds one of Nelson Rockefeller’s decision to drop out of the race after losing the California primary, deferring to the candidacy of Pennsylvania’s Governor William Scranton. This dramatic but doomed effort failed to deny Goldwater the nomination at the 1964 Republican convention in San Francisco.

The Democratic Party’s leadership could not stop Bryan 1896 when he won the nomination by stampeding the convention with his “Cross of Gold” speech. But that did not prevent prominent Democrats from attacking their party’s nominee. In fact some Democratic leaders even went so far as to form the National Democratic Party — a third party whose sole purpose was to take away votes from Bryan and ensure his defeat in November elections.

No such third party movement followed Goldwater’s nomination in 1964, but plenty of high-level Republican congressional and gubernatorial candidates abandoned their party’s nominees. In a vain attempt to distance Ohio Republican Senate candidate Bob Taft from Goldwater some of his supporters printed bumper stickers saying “Johnson-Taft in 1964.”

The massive defeats of Republicans in the Midwest and Northeast that year provided President Lyndon Johnson with historic Democrat majorities in Congress. One could argue that the Great Society was launched on the back on the Goldwater nomination — just as those are arguing that election of Hillary Clinton could be traced to a Trump nomination if the millions of potential new voters that Trump has promised do not materialize in November.

The immediate impact of the past two hostile takeovers (1896 and 1964) was massive defeat for their party. But each takeover had long-term consequences as well for the party and for the Third Party System. Although Bryan lost in 1896, his dominance of the Democratic Party afterwards resulted in his nomination (and loss) in 1900 and again in 1908. His defeat in 1896 triggered a realignment that drove his party into a minority status. Only one Democratic president was elected in the next thirty-four years.

Goldwater had no such immediate impact on the Republican Party after 1964. His loss, in fact, contributed to the nomination of insider Vice President Richard Nixon four years later as the party establishment exerted and pushed aside Ronald Reagan’s first presidential bid. But Goldwater’s doomed effort in 1964 became a factor in Reagan’s success in 1980 in his third effort to get his party’s presidential nomination.

Most presidential elections are neither exciting nor historic. They feature safe candidates supported by party leaders. Not so in 2016. The future of the Republican Party under a Trump presidential nomination and possible administration will make this an exciting and historic time.

Dr. Rupp is a professor of history and political science at West Virginia Wesleyan College. 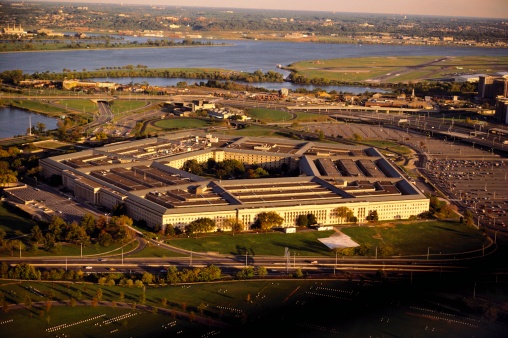 Congress's Deep Hypocrisy on Defense Spending
Next Up: Editor's Pick