At the start of its current season, Scandal regained its momentum with episodes that dealt with real-world political issues. The show was as outsized as ever, but its zanier moments got the ballast they needed from plotlines dealing with, say, abortion or coded language around black women’s accomplishments. These issues fit neatly into a universe that’s as loopy as any ever seen on TV; that abortion came up, for instance, because the First Girlfriend aborted the President’s baby in secret is the sort of dramatic excess one has to love about the show.

Which makes it disappointing but not surprising that the show’s introduction of a Donald Trump figure works as poorly as it does. Hollis Doyle, a character who’s been a part of the show since its early going, has entered the race for the Republican nomination for President, opening his campaign with a speech full of anti-immigrant and anti-refugee sentiment. The problem isn’t just that the real-life Trump is more interesting and, yes, more watchable than a character of fiction; it’s that this rhetoric emphasizes how fuzzy Scandal allows its politics to be.

Consider that Doyle’s two fellow Republican candidates, as well as the Republican incumbent he’s running to replace, don’t just differ from him in terms of degree; earnestly devoted to liberal ideas of fairness for all, they’re his polar opposites. (Occasionally, as in Vice-President Susan Ross’ mention of her belief in balancing environmental goals with industry in this episode, they’ll go so far as to say something centrist.) Introducing him as a political player only emphasizes just how far to the left this universe’s GOP is. The real-world Trump was, until his nomination became a very real possibility, grudgingly tolerated by his fellow candidates, who shared with him certain goals and ideas. Hollis Doyle immediately earns the burning enmity of his leading competitor, former First Lady and ambitious first-term Senator Mellie Grant.

Her job description is meant to sound familiar, and represents the best of what Scandal can do—place American politics in a blender and produce something toxic but delicious. But I can’t help feeling like the Hollis Doyle character misses out on something crucially interesting about Trump, which is not his distance from mainstream conservative thought, but his relative closeness. (The rest of the Republican field of candidates, for instance, do not express themselves the way Trump does, but were not rewarded for expressing pro-immigration beliefs.) The ruling Republicans on Scandal have always acted exactly like real-world Democrats, which makes their outright disgust at Doyle’s frankness in keeping with their character. But it’s proof that the show isn’t quite equipped to deal with Trump’s wide popularity and growing establishment bona fides.

It’s worth noting again, too, that Trump is simply more compelling than the Doyle storyline. The key turn in Doyle’s plotline so far is that he’s stolen Mellie’s (not very compelling) plan to open the campaign at his elementary school and her (outright bad) campaign slogan “Embrace America’s Tomorrow.” On its own, this is a fairly schematic plot (for some reason, Mellie described her entire strategy to the untrustworthy Doyle); in comparison to the way Trump deals with opponents, it’s child’s play. The problem is that if Scandal really had a Trump character, one who spoke so freely and so far beyond the bounds of what had traditionally been accepted, no one would believe it.

This is a soap opera, not fantasy. 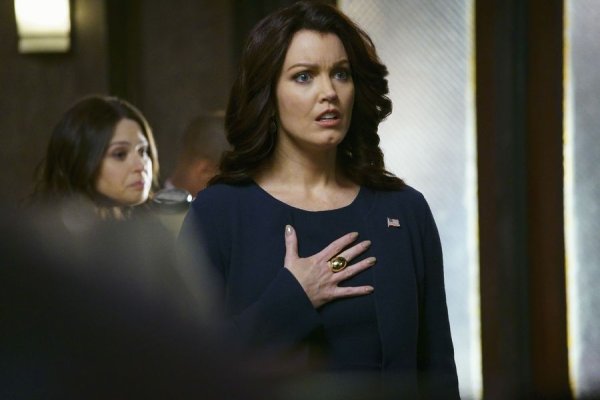 Donald Trump Comes to Scandal—Sort Of
Next Up: Editor's Pick