Following a complaint claiming they had “hurt the sentiments of Hindus,” two men were arrested in India on Thursday for allegedly sharing a doctored image of the leader of India’s biggest Hindu nationalist group.

Shakir Yunus Banthia, 22, and Vasim Sheikh, 21, were apprehended in the state of Madhya Pradesh for circulating the image of Mohan Bhagwat, the Indian Express reported.

The photo in question features Bhagwat, head of the hard-line Hindu organization Rashtriya Swayamsevak Sangh (RSS), dressed as a woman wearing brown pants — a joke based on the group’s recent changes to its uniform. According to police, Sheikh posted the image on his Facebook page while Banthia shared it on messaging service WhatsApp.

The duo have been charged with “publishing obscene material” and “creating or promoting enmity … between classes,” both punishable by up to three years in prison. They were arrested due to similar but separate complaints by local residents saying that they had hurt the feelings of the Hindu community, which the complainants said Bhagwat represents.

The RSS is considered the ideological root of Indian Prime Minister Narendra Modi’s right-wing Bharatiya Janata Party, which has been accused of attacking free speech and fostering religious intolerance since it came to power two years ago. 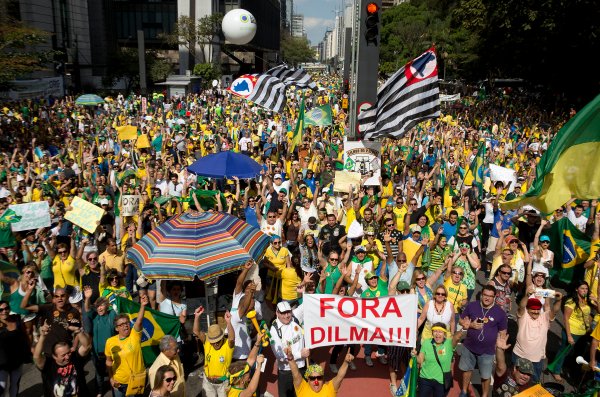 These 5 Facts Explain the State of Global Corruption
Next Up: Editor's Pick