Stella Kozanecki has never run for elective office. But in four months, she will pay her own way to Cleveland to cast her ballot as a delegate at the Republican National Convention, just possibly making her one of the most powerful people in the country.

The 80-year-old retired insurance executive from Mount Vernon, Ill., is one of the first delegates to have been named for what could be the first contested national convention in generations. If Donald Trump fails to secure 1,237 pledged delegates — a tall order requiring him to win about 53% of the remaining delegates in a three-way race — it will be up to the convention to pick the GOP nominee in multiple rounds of balloting. And who the delegates are may be just as important as who they are bound to support, because in most cases the delegates will be free to vote for whomever they want to become the nominee.

Six weeks after the Iowa caucuses more than 1,440 delegates have been pledged to the convention, but fewer than 100 of them — aside from the 168 automatic delegate members of the Republican National Committee — have actually been named. And the race to influence those delegate selections is in overdrive, with the Trump and Ted Cruz campaigns forming teams to track who is in the running for delegate positions, jockey for their preferred candidates, and identify potential crossover supporters. Nearly all delegates are bound for the first ballot, and most are released on subsequent rounds under state or party rules, meaning Trump is depending on the loyalty of his delegates to stay with him through multiple votes.

In interviews by TIME with 10 delegates who have already been named, Trump appears to be doing well so far. Trump supporters like Kozanecki say they are loyal to the end. Bound through the first ballot under state and party rules, Kozanecki said she “will not change” her vote on subsequent round, and called the “Stop Trump” movement “despicable.” But those delegates pledged to his opponents are readying to do anything they can to block him.

Pat Brady, the former Illinois GOP chair, was elected in Illinois on the ballot as a pledged delegate to Ohio Governor John Kasich. He says he’s committed to helping win over as many possible delegates at the convention to Kasich. “There’s no way in hell I’ll ever vote for Donald Trump,” he says. “Not ever.”

Brady, who was a delegate in both 2008 and 2012, says that “the responsibility is completely different this year,” with there being a chance that delegates will have the ability to shape the outcome. “Last time, it was a voice vote at 5 p.m. I’m not even sure how many people knew what they were doing.”

Becoming a convention delegate has long been a reward for committed party donors and organizers, or reserved for home state pols. Delegates elected directly on ballots are a rarity. In most states, conventions or party committees handle the process weeks, or even months, after primary and caucus votes are cast, and often long after the emergence of a presumptive nominee. What has traditionally been an overlooked part of the process is taking center stage.

The GOP’s best hopes of picking off Trump delegates won’t come from people like Kozanecki, who had to collect 100 signatures to qualify as a delegate, but from places where party committees wield influence, like South Carolina and Tennessee. In Tennessee, for instance, the state chairman offers a slate of delegates for confirmation by the state’s executive committee. That means anti-Trump delegates could theoretically be selected with a commitment to vote for Trump only on the first ballot. In South Carolina, delegates had to be placed on a slate in 2015 — well before Trump’s team began organizing.

In New Hampshire, where campaigns submitted slates of delegates, Trump sought to ensure loyalty by sending campaign manager Corey Lewandowski, a native of the state, as a delegate. But those pledged to other candidates include state party chair Jennifer Horn, who was outspoken in her criticism of Trump and is one of the three delegates pledged to Jeb Bush in the state. (Bush delegates will be released should he formally withdraw his candidacy.)

In Washington, D.C., where Marco Rubio won the vote days before dropping out and Kasich came in second, every delegate contacted said their delegation is unified against Trump. “I ran as a never-Trump person, so I won’t be supporting him,” says Rich Counts, a 2012 delegate pledged to Rubio. “I’m open to anyone on the second ballot, but him.”

Kris Hammond, a delegate elected in the District of Columbia on Saturday on an anti-Trump platform, says even if Trump wins the nomination, his opponents’ fight won’t end there. “We can all show up with anti-Trump paraphernalia,” he tells TIME. “We could walk out.” 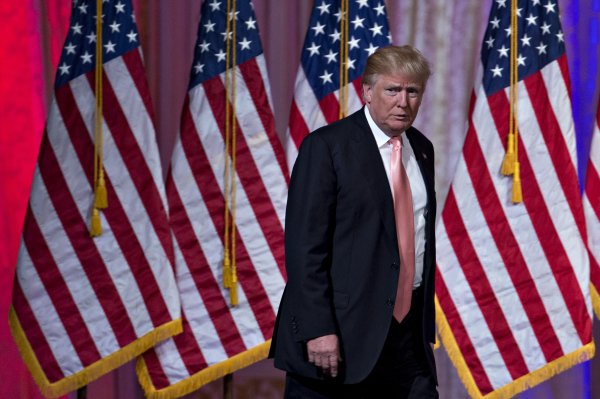 Donald Trump Warns of 'Riots' if He's Blocked at Convention
Next Up: Editor's Pick